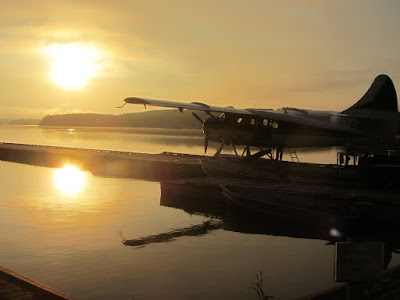 Sunrise--we woke at 5am and drove from Balmertown where we had stayed the night in the Nature's Inn to Red Lake for the 6:30am flight--Upon arrival at the Chimo airlines bay on the lake, we had our gear and food weighed and were also weighed on a giant scale with a few other people who were to take the flight with us--this year in a far larger plane than the 2 seater with ear phones we took a few years back. After loading up the planes, we sat and watched the fog come in and then ever so slowly the tower up on the nearby hill became visible again and it seemed the fog had officially gone back out.... and so we hopped into our little plane: 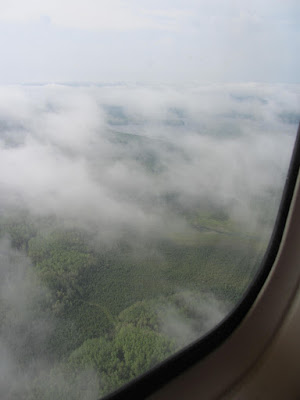 Flight to Bull Moose Camp take 1--it seemed to be going so great, the pilot looked confident, we lifted off of the lake and headed over the first sets of trees and other lakes and then.... fog and clouds and a U-turn. As seen in the second photo above--out the window, a vision of the fog closing round us sending us back for what would be a lingering morning in Red Lake as we waited for it to burn off. Despite this, Dad and I looked happy and not at all as nervous as we probably both were (or, at least I am speaking for myself here). 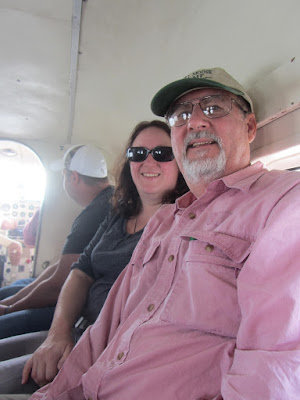 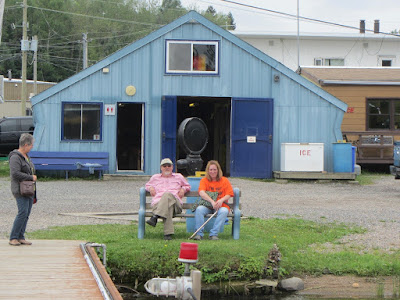 In the photo above--waiting out the fog which is above out little bay which sat in a bowl of mostly clear air. We went off for a coffee and donut nearby then sat around on benches and got acquainted with many of the fishermen and women who would be spending the week with us. Just after noon it began to rain and it seemed that the day would be entirely lost as darker clouds were looming. But it was as the rain picked up that the pilot came re-charging out of the office and said "OK, it's now or never"--and in fact another, little plane had gone out about 10 minutes before to test the airs and had radioed back in--the sky might have looked darker to us, but in fact it was far clearer up high--as this picture from round two--the successful flight to Bull Moose Camp shows. A lovely view out over the expanse of trees and lakes and trees and lakes.


One at Bull Moose Camp we offloaded the plane in a tight line and used dollys to roll the food and gear to the cabin where I set up the kitchen and rooms while dad got our poles set up and ready to head out onto the lake and catch some Walleye. It was, in fact, the perfect fishing afternoon--overcast and the weather was neither too hot nor too cold. We got sprinkled on from time to time but never soaked and the fish were biting like mad. Here are some photos from our first afternoon out--Dad and I in "our" boat for the week--boat number 5. 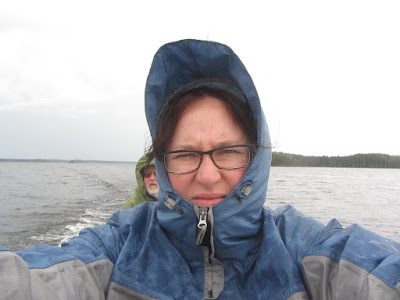 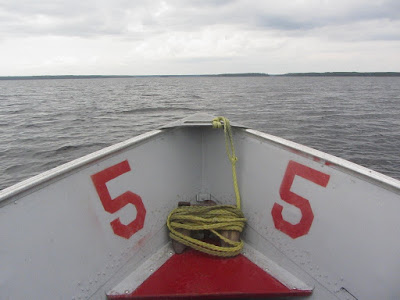 The boats have all been super rigged out with new engines which are powerful and quiet at once. We sped down to one of the farther ends of the lake and tried our luck at a few spots en route, to no avail, then happened on a spot my father recalled was a good one from his past visits and we could hardly get the fish off the hooks before we had another bite.
We often found ourselves having to wait for the net for our slightly bigger catches, though it is true that we caught a lot of smaller (14-16inches) walleye, which we tossed back too. The max size is 18 inches that one can keep, but we took a few pictures with one of my larger Walleye--a 23 incher--pictured here: 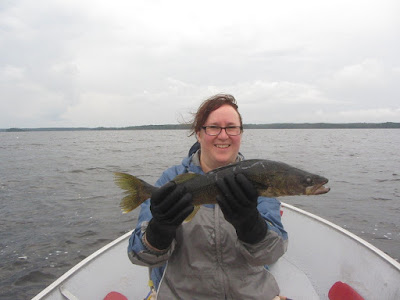 And dad caught a 37 inch Northern Pike with what seemed a HUGE head! Pictured here: 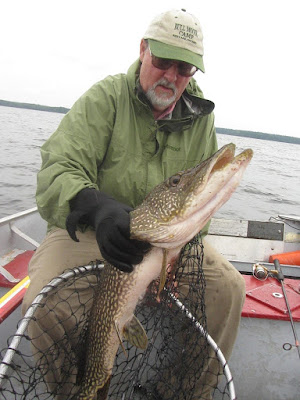 I thus added him to the "brag" board for today for catch and releasers--we took these pics of him with the fish before we watched the fish swim happily away to perhaps eat some of those walleye.
At the end of our afternoon we had also kept our limit for the day (see us pictured below with our 3 meals) which has provided us with a wonderful fish fry dinner and also provided dinner of fish for two of our fellow campers who did not yet get out on the lake. PLUS we have some fish left for the morning. So certainly there would never be any reason not to get this kind of licence. BUT as we have eaten our fish, we are certainly going to be motivated to get back out there tomorrow and catch dinner again. 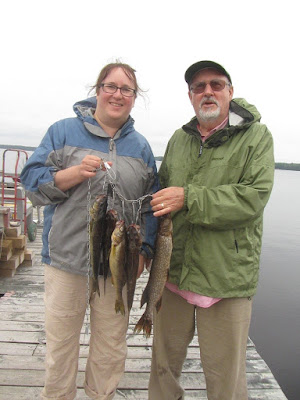 Back on land, I began cleaning the fish and remembering how that worked but dad quickly took over while I snapped some picks of an adorable groundhog and chatted with some of our neighbors. 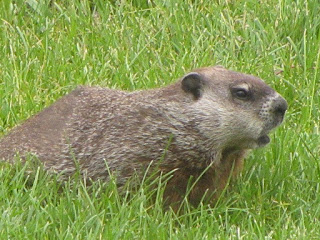 We went out for a last little boat ride and attempted to catch larger fish by casting down a nearby river but the fish who seemed to try for our bait were so small they could not get our optimistically large hooks into their mouths. But it was fun to watch them leap out of the water for my floating spinner a few times. Here is another camper's boat coming back in, and then a final evening scene of the boats now on the beach for the night. A light rain patters on the rooftops and there is an amazing silence here, so far from civilization. A wonderful first day at Bull Moose Camp. 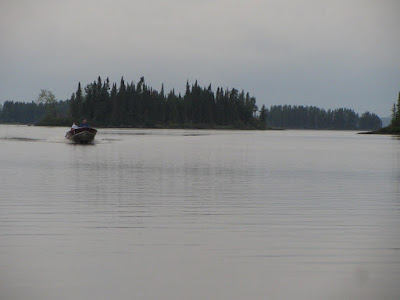 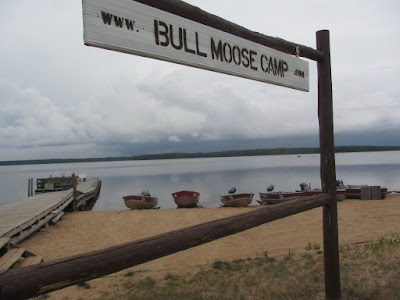