I am thrilled to announce that I will be giving a talk at the CITIZENSHIP ACROSS BORDERS conference in Strasbourg at the Palais Universitaire Salle Pasteur (full programme for anyone interested in attending below). I will be speaking in Panel 1 Citizenship as a construction: Language, Literature and Perceptions at 13h30. My talk is titled: " Under Flag: Language and (Unattainable) Homogenization in the Era of Postnational Citizenship" and it is about the multilingual writings and performances of Theresa Hak Kyung Cha, Craig Santos Perez, Bhanu Kapil and Myung Mi Kim. 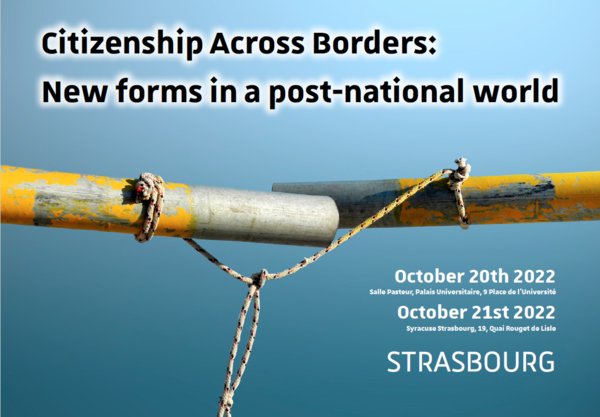 Abstract for my talk;

As definitions of nationality and citizenship develop and change, one of the unifying methods of assembling a people under one flag has continued to be language. Language tests have become a component of Nationality exams in France and other European States. Perception of poor reading or writing skills in the language of the country one is attempting to officially migrate into has even lead to the revocation of temporary asylum and national status. Defining nation and citizen based on language is even more highly problematic within the USA, where there has never been an official National Language. This talk will explore how this complex, highly fallacious method of calling a people a people, unified under the umbrella of language, has been radically deplored and deftly criticized within later 20th century and early 21st century experimental poetry and poetics, especially in the writings of marginalized and immigrant populations of the United States, from immigrants Theresa Hak Kyung Cha's and Myung Mi Kim’s books to USA native of Guam, Craig Santos Perez’s 4-book cycle from Unincorporated Territory. These authors, like Bhanu Kapil who I will also speak about, in inspiring, emblematic works, have quietly been lobbying through marginalized, often invisible poetic practices for non-binary existences, for new ways to say “I belong”, “I am here”, methods of recognizing the root relationship between language (as spoken and written) in attaining a post-national state of citizenship.

These works are a reckoning and recognition of linguistic and cultural otherness within perceived unified nations. As such, exploration and study of these authors provide essential tools for deeper reflections on notions of citizenship and nationality in our increasingly globalized world.

Maxwell School of Citizenship and Public Affairs of Syracuse University

9h00-9h15 Welcome in the Aula of the University Palace

Citizenship as a construction: Language, Literature and Perceptions

Jennifer K. Dick, University of Haute Alsace: Under Flag: Language and (Unattainable) Homogenization in the Era of Postnational Citizenship

Challenges of Immigration between Africa and Europe

Azra Hromadžić, Syracuse University: A City in Love with the River in Bosnia and Herzegovina

14h00 Round table and debate

And then what? New nationalism in Post-national era

16h00 End of the conference and free time in Strasbourg

Posted by Jennifer K Dick at 5:56 PM No comments:

This week of the WICE Paris Writers' Workshop has events for participants and for the public. Don't miss out on the special opportunities that the workshop offers, and please join me both for the FREE AND OPEN TO THE PUBLIC READING at the Red Wheelbarrow Bookstore on Thursday night at 6p and for the FREE PANEL TALK Friday evening at FORUM 104, 65006 Paris. 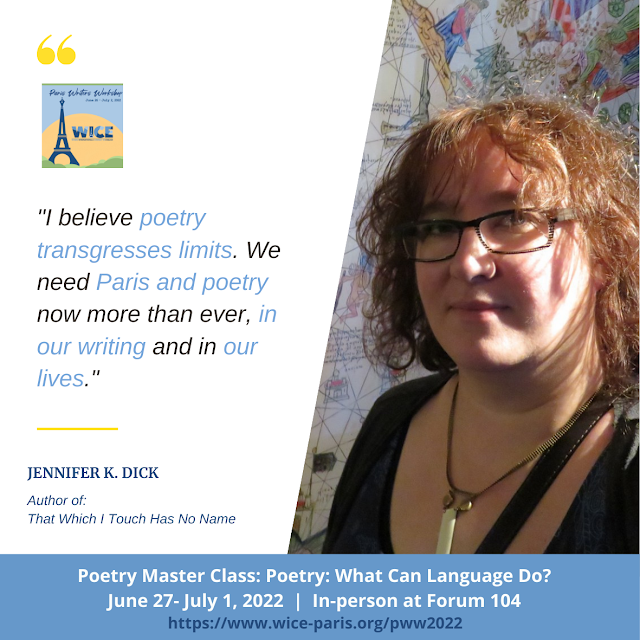 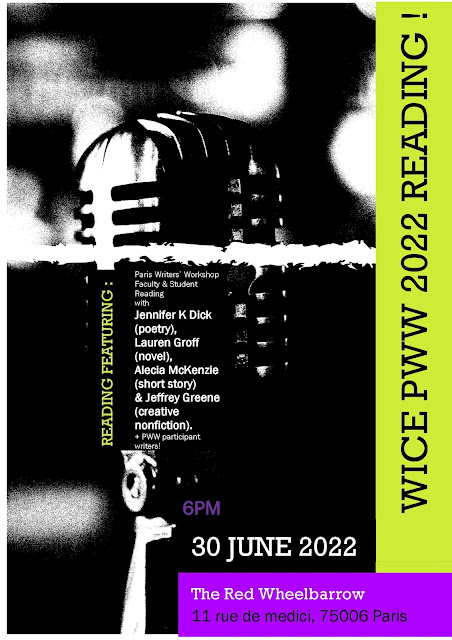 PANEL TALK JULY 1 2022 4pm-6pm: to close this fabulous week on writing in Paris. Please join us for this conversation on WRITING IN PARIS: MIGRATION AND THE ARTS with CRAIG CARLSON, JENNIFER K DICK, MATT JONES and JAKE LAMAR, moderated by KATHLEEN CHURCHILL. Open to the public, but REGISTRATION REQUIRED via the WICE PWW website: 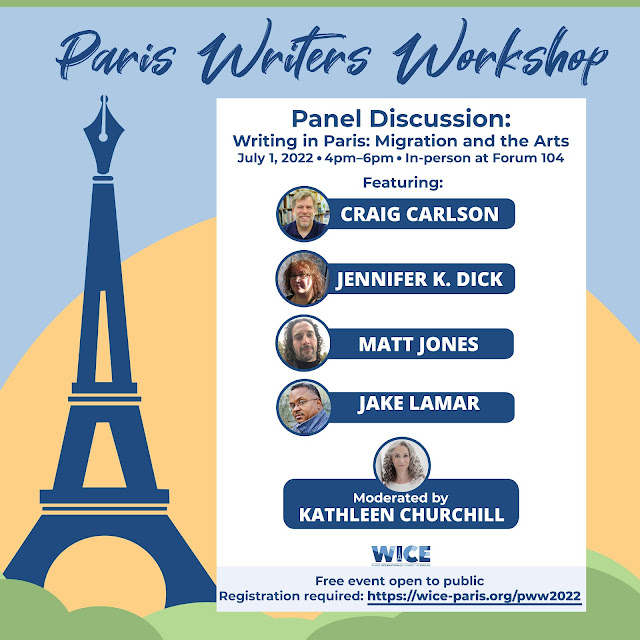 Posted by Jennifer K Dick at 7:17 AM No comments: 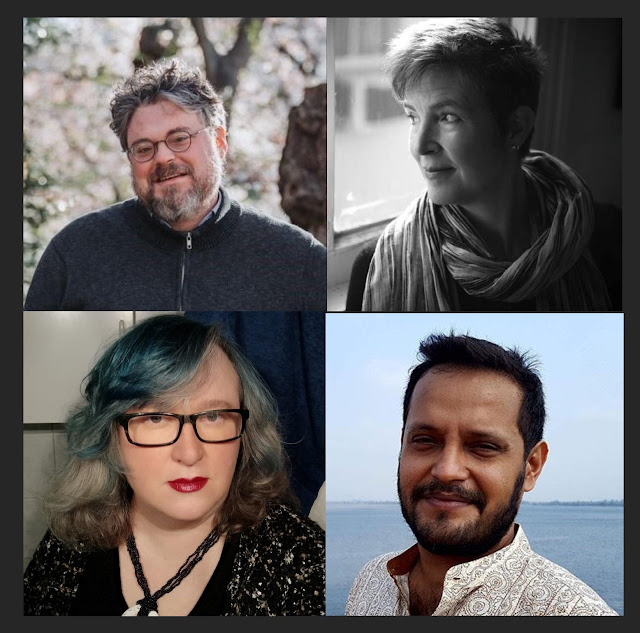 Alexander Dickow is the author of 8 books—most recently Le premier souper (La Volte, 2021) & The Appetites (Madhat, Inc, 2018). He writes with equal versatility in both English & French as well as in a combination of the two. He has also translated 2 books & edited 2 critical volumes. For more, see: https://www.alexdickow.net/

Jennifer K Dick is the author of 4 collections of poetry & 6 chap/artbooks. She directs the department of English at Université de Haute Alsace, France. She will be reading from That Which I Touch Has No Name (Black Spring Press Group, 2022) & artbooks from Estepa Editions, France. For more, see https://jenniferkdick.blogspot.com

Biswamit Dwibedy is the author of 6 collections of poetry published in India & the United States, including Hubble Gardener (Spuyten Duyvil, 2018). He is the founder & editor of Anew Print, a small press that publishes limited-edition chapbooks from writers in India & abroad, & he edited selections of Indian poetry in translation from 7 different regional languages for Aufgabe in 2015. He teaches at The American University of Paris.

Laura Mullen is the author of 8 books of poetry (most recently Complicated Grief, Solid Objects 2015). Her translations from the French include Hero by Véronique Pittolo (Black Square Editions, 2018). Mullen is currently the Kenan Professor of the Humanities in Creative Writing at Wake Forest University’s Department of English. She will be reading recent translations alongside the French. For more see: https://www.lauramullen.biz/

Posted by Jennifer K Dick at 8:09 PM No comments: