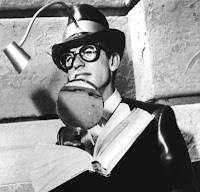 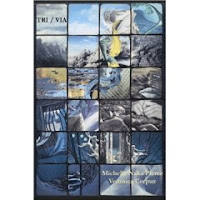 worth visiting to see photo shows, art installations, etc. Watch their sites for events and readings as well. An explanation of their review is at: http://www.104.fr/#fr/CENTQUATRE/149-Revue. I dig the photo here at the right by Pascal Dhennequin from le 104 under construction. I hope he'll forgive my putting it up on the blog, but it is a great pic!!!!
Posted by Jennifer K Dick at 11:15 AM No comments: 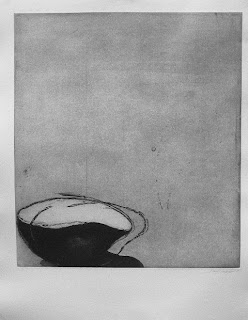 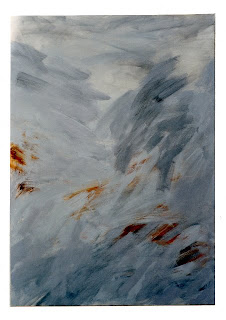 Getting back into the "grind", and with great relish--Paris is full of book and art events, so many things I can't keep up with all I want to see and be part of. But I am also trying to engage differently in the world of art and writing this fall, and so would like to share two recent publications I have been part of where I am engaging in reading and image critically, or as interviewer.

First: KATE VAN HOUTEN. An artist that has been a long-time friend of mine, and whose varied work I admire and have often drawn inspiration from for my own poetry--for example the writing of Retina which later became one of Estepa Editions--kate's artist book press--books. When asked by Richard Nahem to write once-a-month texts on an artist living and working in Paris for his wonderful blog "EyePreferParis" I leapt on the opportunity and knew immediately that I wanted to begin with my close friend. For me, this was an opportunity to talk to her in depth about her work in a way I had not done before. I asked her a lot of questions about where her varied pieces came from, how she had grown as an artist, and in the process learned also about some places I might go visit in Paris that she loves. Please do check out the final product, with my photos of Kate alongside her fellow studio mate, Daphne Gamble. The post is from Oct 14th, 2008 on the blog EyePreferParis: http://www.eyepreferparis.com/

prize winners, all strong influences on me as I developped into a writer, especially their essays which reflected deeply on the international writing scene, traditions, patterns, even politics and language. How now to start my own journey of writing essays on poetics and poetry, essays in which I might ask myself (and others) questions about what feels an essential debate that has followed me since I was 18: the traditions of writing (poetry in particular), and experimentations. When David Caddy, of the UK magazine Tears in the Fence asked whether I would be interested in writing a regular column for his lit mag, I saw this was absolutely the opportunity I had been awaiting. To write about poetry in an international context, in particular in a country (the UK) which feels still to me stodgier in its poetic practices, and thus which will force me to take a closer and more honest look at what is happening in the UK while also allowing me to introduce to the British community some of my views and books I read that are published in the USA.

For "Tears in the Fence" n°48, you can order a copy of the magazine or subscribe, or even submit some poems for a future issue by writing to David Caddy, the editor, at: 38 Hod View, Stourpaine, Nr. Blandford Forum, Dorset, DT11 8TN, England. You can also ask him to send you a subscription form or info via emailing him, but no submissions by email please: "David Caddy" <david@davidcaddy.wanadoo.co.uk>. While you are checking out the magazine, you might also enjoy David's own blog, at: http://davidcaddy.blogspot.com/

Posted by Jennifer K Dick at 2:39 AM No comments: