Woke at 7:40am to see that a few groups were already draining their boats of the overnight rain and packing them up with gear to head out while I brushed my teeth in a daze and waited for the ani-itch cream to take effect on some of the mosquito bites acquired overnight as my dad also began getting ready for the day. We had a lingering breakfast and set up some new line on a casting reel so that we could rotate from casting or trolling for northern along the shores or islands to minnow and "Berkley Powerbait 2 inch power grubs" fishing in deeper water for walleye. We set out into a very very sunny late morning full of optimism as we boated over the glassy, serene lake:

But alas the fish seemed to like the hot day less and though we had some success catching a bunch of tiny walleye and a small northern, we were not as excited by the shoreline spots we were trying out and so headed to some places at the very far far end of the lake. There, too, we did not catch much but we had an amazing encounter with an eagle that flew over us many times very close and seemed about to hunt down a fish I'd seen come to the surface not far from us. In the end, though, the eagle veered off and headed high into the skies and day. 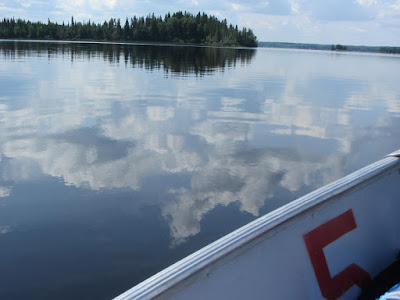 HOT and a bit tired, we pulled the boat up against the shoreline of one of the islands and ate our packed lunch while floating in a bit of shade. Then we tried trolling for a bit and when that only got another smallish walleye we headed back over to the spot we were last night. There, again, we had far better luck (and thus dinner panic was over). Dad even caught a nice sized walleye that was too big to keep--21 inches--seen here: 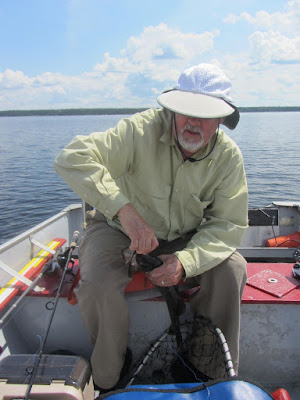 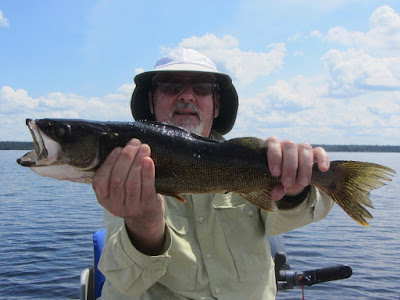 After we'd caught our dinner, we anchored at our personal hot spot to cast a bit more for catch and releasers, hoping for the big one. Dad began to complain that he was too hot under the late afternoon sky just when I pointed out a large dark cloud heading our way. As it grew closer, it became apparent that the cloud was not alone and with the low rumble of thunder not far enough off we hoisted the anchor and headed back towards camp--and just then it began sprinking. This seemed perfect, a nice cooling off, but about halfway across the large lake I suddenly saw an odd line of indentations make a quick stripe over the water. As my mind caught up to what it was, it was already too late--the massive downpour was upon us. Dad was calling out for rain gear jackets and we did our best to zip them up as the torrent came along with some winds. We could still see the sun on a strip of lake which we chased and chased, bringing the storm with us all the way back to camp. Soaked. really SOAKED, dad said that was it, we were in for the night--after 5 1/2 hours in the boat and soaked through, shoes, clothes, etc I acquiesced. We cleaned the fish while still dripping wet then cleared out the boat and began to hang things out to dry over our picnic table--as the rain had already stopped and left a softer sun in the wake of the storm. 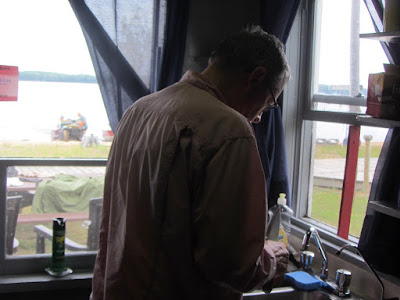 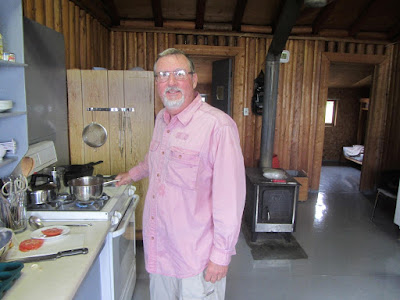 Now, to close out our day Dad is making us dinner--a chippino red sauce with the northern pike from yesterday and some of the walleye we caught today, a can of clams and tiny shrimp in a spicy red sauce, which we are going to put on some spinach fettucini. The neighbors gave us a cob of corn which we will have with it to make this a real gourmet dinner at camp! And, what's more, Dad brought a jar of fois gras for hors d'oeuvres and we even have a bordeaux blanc--a mouton cadet--which has a lovely tangy lemon edge to it. This is really fishing in style!
Posted by Jennifer K Dick at 4:19 PM