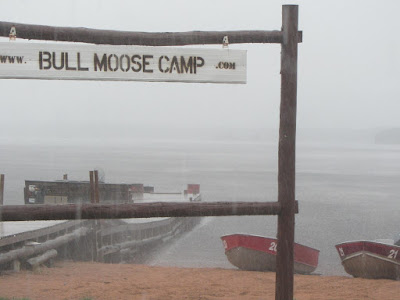 There seemed to be no clouds that my father and I did not want to motor directly under for a solid drenching on DAY 3 out on Upper Goose Lake here in Ontario, Canada. One thunderhead in particular was looming and ominous so we decided not to stay out on the lake but rather to head in to camp. However, this just meant that we motored straight into the storm (which was not a thunderstorm, just a good drencher in the end) and rode with it to shore--later in the day I talked to some guys that had been fishing just a little beyond where we had gotten spooked and they said they only got sprinkled on. Not us! As my father put it "it was like someone turned a fire hose on us for 5 minutes". To which we can both say rain gear is not really prepared. It held up great on all of our other soakings, but this one was just too much--in part perhaps because I was holding our rain gear pants in my hands and saying --which one is whose? just before the sloshing got started--so we were both tugging on the gear when the skies opened up. In fact, as we boated home I saw a massive line of indentations cross the water in front of us and turned around perplexed when my dad had that alarmed "oh, wow, we are going to really really get wet" look and after that one line it was upon us--or shall I say we advanced properly into its center? And that is how we kindly brought the storm with us--as we were both travelling at what seemed the same speed! 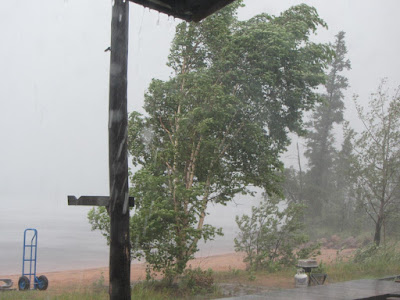 Back at camp we took HOT showers and changed out of our wet things and admired the wild rainy and windy moment which oddly passed right on through leaving bright sun behind. So, as we were not to be 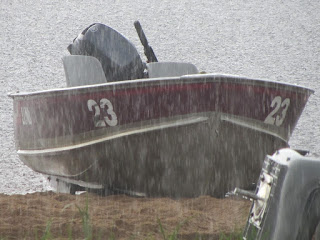 deterred, out we went for another fishing moment--and we had a nice time casting for northern on a shore and around some of the islands that are just to the east of camp. I caught about 4 small (but not tiny in the least) northern on a surface spinner bait--which is a ton of fun as the fish comes up over the surface to really grab the thing. All were let loose again and we tried fishing another shore but after getting rained on some more and no longer getting bites, we decided it was time for dinner.

Of course, part of Day 3 was dad catching the smallest fish thus far. Now fishermen like to tell tall tales of the big one that got away or the big one they caught, but rarely do you hear a fisherman spinning a yarn about the tiny wriggling little sprite of a fish he managed to get into the boat. But really, they should. Because it is not all that easy to get the tiniest little fish caught on some of the optimistically large hooks we use. And so, to commemorate the fabulous deed of catching the tiniest fish on the trip, here is the photo I took to mark that great moment in fishing history for dad: 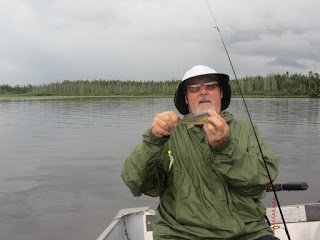 What was spectacular about the cloudbursts that travelled through bringing rain off and on, however, was the sunset. In fact, the sunsets on day 3, 4 and 5 have been spectacular (tonight is the eve of day 5 and so I am doing a little backlog blogging tonight). Here are a couple of photos from the magnificent sunset on Day 3: