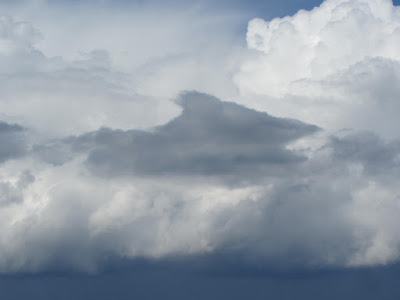 After a few days of fishing, even the clouds begin to look like fish. This cloud was over the big part of the lake, watching over my father and I as we had a big late morning/early afternoon of Walleye catching success out by the buoys. We decided to try out the double bouy spot, parking outselves in between, and had some success with some smaller fish then got a few larger ones when we shifted positions slightly. This said, I may have topped my father's record for the smallest catch with the little walleye pictured in the photo below. Again, don't go snickering--it takes some skill to get a little fish like this on the line! (though not much skill to lift it into the boat once it's hooked!) 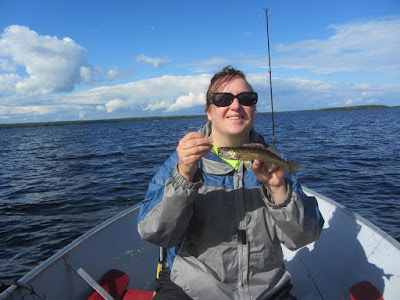 In general, this was a day of getting rained on then skies clearing off, then the same happening again. Only finally we seemed to have a clearer idea of where the clouds were going. At one point every single area around us seemed stormy except for one strip of blue sky and we managed to stay under that strip of blue and out of the big rains until the clouds blew off. This, considering our skill the day before of trekking straight into the storms, was a real exciting development for us. We were, after all, just happy to be generally dry and thus not chilled. So, with that in mind, we fished... and fished..... and fished. Here are a few pics from the day:


And so it was that another day of successful fishing ended... followed by the last of the "big storms"--in case you are unclear about why the sky is entirely red here, it is the sunset reflecting off of the oncoming rain as it begins to cross the lake heading towards us. Tremendous! And thus some really spectacular sunset photos to close another lovely day!