WHAT IS YOUR FRAGMENT VI: Michael Ruby responds

What is YOUR fragment? Poets explain this technique as it appears in their books (see original conversation post HERE for the questions and a response by Lisa Pasold HERE  the second response by Marthe Reed HERE,the third by George Vance HERE The fourth by rob mclennan HERE, the fifth by j/j hastain HERE and today Michael Ruby responds, looking back at his books and notebooks. 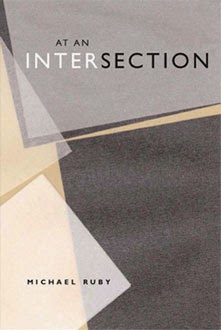 Michael Ruby is the author of five full-length poetry books: At an Intersection (Alef, 2002), Window on the City (BlazeVOX, 2006), The Edge of the Underworld (BlazeVOX, 2010), Compulsive Words (BlazeVOX, 2010) and American Songbook (UDP, 2013). His trilogy, Memories, Dreams and Inner Voices (Station Hill, 2012), includes Fleeting Memories, a UDP web-book with 80 photos. He is also the author of three Dusie chapbooks, The Star-Spangled Banner, Close Your Eyes and Foghorns, and is serving as the editor at Station Hill for Bernadette Mayer’s forthcoming collected early books. A graduate of Harvard College and Brown University’s writing program, he lives in Brooklyn and works as an editor of U.S. news and political articles at The Wall Street Journal.

I have always collected poetic fragments and tried to make something out of them, usually without much success, except for such poems as "I Chose to Remember" (1989), where I worked with fragments from a journal written during a three-week visit to Virginia; "Openings" (1991), which used the first lines of failed poems; and "Among the Crepusculars" (1994), a poem built from fragmentary translations of Italian Crepuscular poets, especially the great Guido Gozzano. These three poems appeared in my first book, At an Intersection (2002).


Two kinds of poetic fragments, titles and first lines, have particularly interested me.  After sporadically collecting them for years, in 1999, I decided to start a notebook called Titles & First Lines, which I leave open on the right side of my desk and write in occasionally.  I am on the fourth volume of the notebooks now, 15 years later.


In 2003, I used the early notebooks to construct the multivocal long poem "Titles & First Lines," which later appeared in the ezine Mudlark and in my book Compulsive Words (2010).  The poem was heavily influenced by my close friend Sam Truitt's multivocal book Falltime (available in Vertical Elegies, UDP 2008), which I performed with Jon Fried at Sam's book party at Poets & Writers in New York in 2003.  My long poem can be accessed at the following link: http://www.unf.edu/mudlark/posters/ruby/ruby.html.  I also made a monovocal recording of the poem in 2008-2009, which is not yet available online.  I hope to expand the poem into a full-length book, using many of the titles and first lines I have collected since 2003 (and all of the "compulsive words" I have collected since 1999).
The problem is, where does the book end?  Where does the accretive work end?  At some arbitrary stopping point?  When I finish writing down titles and first lines?  I don't like the sound of that.  I guess it ends with an ellipsis.  To be filled in later, or not.
Posted by Jennifer K Dick at 1:05 PM

Email ThisBlogThis!Share to TwitterShare to FacebookShare to Pinterest
Labels: Fragments in literature, Michael Ruby, Musings on Reading, Musings on Writing