What is your FRAGMENT II: Marthe Reed responds

What is YOUR fragment? Poets explain this technique as it appears in their books (see original conversation post HERE for the questions and a response by Lisa Pasold). Today, MARTHE REED responds: 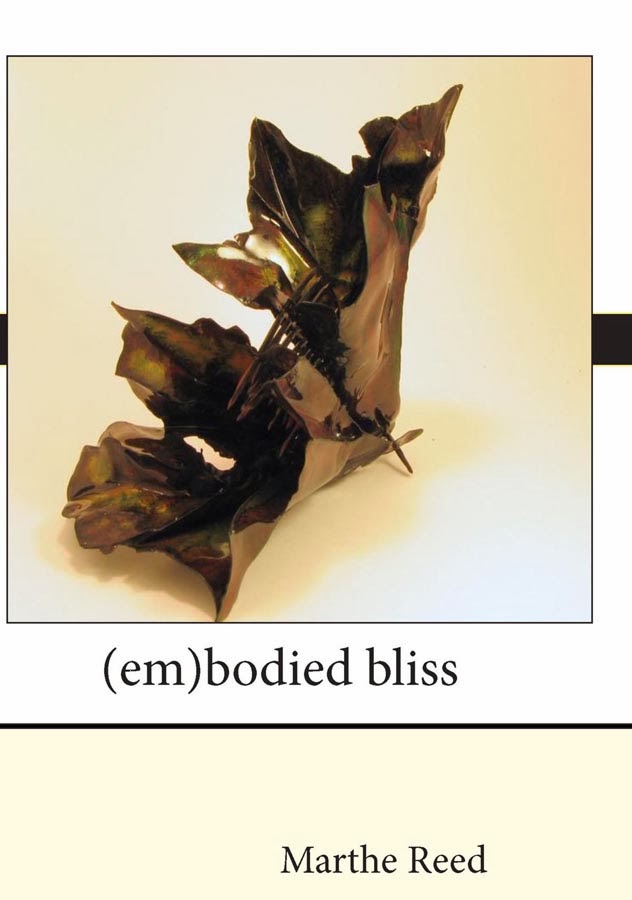 MARTHE REED is the author of (em)bodied bliss (Moria Books 2013), Gaze (Black Radish Books 2010) and Tender Box, A Wunderkammer (Lavender Ink 2007) as well as the collaborative ekphrastic book, Pleth, with j hastain (Unlikely Books, 2013). A fifth collection will be published by Lavender Ink in 2014. She has also published four chapbooks as part of the Dusie Kollektiv; a fifth is forthcoming from above / ground press. Her poetry has appeared in New American Writing, Golden Handcuffs Review, New Orleans Review, HOW2, MiPOesias, Fairy Tale Review, Exquisite Corpse, BlazeVOX, and The Offending Adam, among others. An essay on Claudia Rankine’s The Provenance of Beauty: A South Bronx Travelogue appears in American Letters and Commentary. She is Co-Publisher of Black Radish Books.

The ideas you have mapped for thinking about all fit, to some degree, my own practice of fragmentation. Increasingly I find myself interested in the collaged, the cut-up, the mash-up, the erasure, all of which provoke the fragment, as well as foregrounding both juxtaposition and silence.

However my interest in the fragment lies as much in my sense of the difficulties of language as I have inherited it to respond to catastrophe or horror, or perhaps what I mean is to adequately engage with what has come to seem a disastrous quotidian experience: terror, drone slayings, torture, environmental predation, global warming, extreme weather, hunger/poverty/homelessness and the intimacy of these with racism and sexism, of hate in all its forms. The fragment then becomes a means of levering open language, seeding it with gaps that mirror the gaps in knowledge or awareness or compassion or insight that afford the human choices that initiate and propagate disaster.

Another, more pleasurable, effect of the fragment is the play it affords, the delicious juxtapositions and associations that can result. Here I am thinking of a kind of surrealist or Dadaist impulse toward encountering the unknown, wherein the use of fragments makes possible new associations, meanings, images, and experiences not only through the strange new couplings but through the silences/elisions that suture them into a new text.

At times I think I have forgotten how to compose sentences within the poetic project, and it is my resistance to transparency that pulls me toward the fragment and fragmentation. For similar reasons, I create visual collages, sometimes with text though not always.

After Swann is a straightforward erasure in which I revisit Swann's treatment of the he beloved via a feminist re-reading enacted by elision: in the forced new associations, her dilemma is fore grounded along his ignorance and self-centeredness, (Em)bodied bliss used the cut-up and collage of numerous sources, sometimes isolation from one another, sometimes cut into my own language, sometimes layered within/amongst other borrowed texts that I have cut-up: reportage, testimony, government documents, speeches, etc.

PS:  The most influential origin for me, vis the fragment and fragmentation, is Lyn Hejinian's My Life. The epigramic fragments that head each year-section were the music, the rhythm that stitched the book together for me. "a pause, a rose, something on paper", this one in particular has never left me, it's phrasing and music, the insistence on the noun, on the list, were/are fundamental to me. In the fragmentation of the prose sections themselves, the splintering narrative that stops turns circles cuts away and returns has also been fundamental. Always what the gaps reveal, what the juxtapositions reposition.
Posted by Jennifer K Dick at 12:53 PM

Email ThisBlogThis!Share to TwitterShare to FacebookShare to Pinterest
Labels: Fragments in literature, Marthe Reed, Musings on Reading, Musings on Writing