Strap on the RAIN GEAR, it's gonna be a wet one... 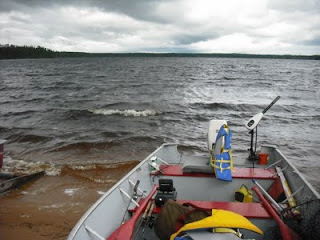 11 July 2011: 9am: We wake to misting rain, grey skies and to see small whitecaps rolling in towards the boats and beach—after yesterday's rocky return over the big part of the main lake I am none too excited to get bump-bump-bumped into Shaken Jen Syndrome. So we vow to stick to less wavy areas and decide to head across the lake to a spot just opposite Camp which dad figures will be nicely protected from the full frontal of the winds. 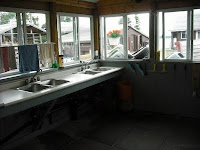 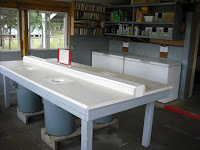 I go and collect 2 dozen fresh minnows for us from the fish house—see the pics here of the tidy fish house with fish cleaning stations with holes for the gunk and unused parts, and then the backroom with the minnow tanks— 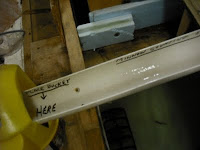 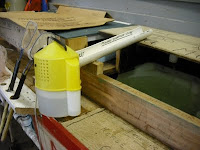 the system for getting a good count of the minnows and for getting them from the fish tank net-scoop into the minnow bucket without harming them is quite intelligent, using the shoot). 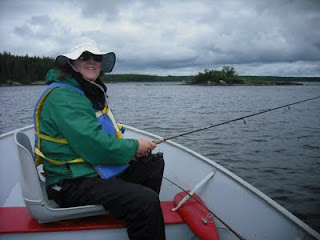 Armed with fresh minnows, lots of layers of clothing (as my pic shows) and determined to catch a big one, we motor off (the last boat to leave camp today—we were reluctant with the chill and after yesterday’s waves).

Although the waters look rougher, today they are not all that bad, and we get across this smaller section of the lake in little time and find the area dad wants to explore. 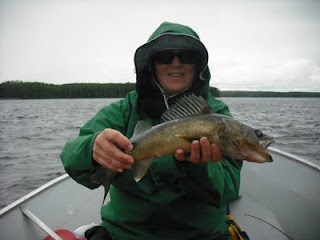 We spend an hour or so catching a few fish here and there (note the nice walleye I have here in the photo on the right) —and right about that spot we did have a moment of really just hauling them in—(enough for a nice dinner!) 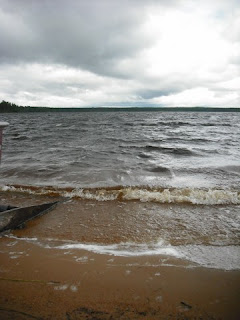 But after a bit, and not able to hold anchor anyplace in particular as the winds there were still pretty strong, we think the pleasant protection of the river where we had a lot of fun hauling in fish near the opening onto Mamakwash Lake will do us some good. After all, we are a bit chilled and the rains are coming in again.

So we pull up anchor and set sail again (well, um, "sail" with our small motorized fishing boat!) 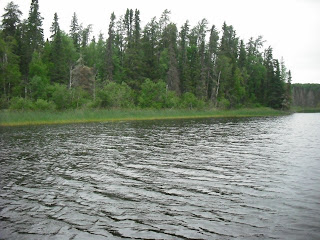 After a quick pit stop back at Camp, we recross the lake to turn into the protected and protecting confines of the river (not protection from rain, but certainly still waters!--note the difference in these photos from the ones on the lake?)

As it is a nicely rainy, cold & cloudy day--the kind of day "big fish" often like to be out in, we decide to cast and troll for northern. However, try as we might, we just keep catching walleye, and dad also catches a perch (yum). We stop for our packed lunch—I made us some sandwiches and Dad had grabbed a few beers during our Camp pit stop before we headed into the river—so we are set.

There is a picnic bench up on a rock and at first we cannot figure out where to park the boat to get to the bench, but after dad’s failed suggestion (which would have included some nice bouldering skills) I suggest we go round the point to the back side of the bench rock—and the boat fits nicely there and holds well for our lunch. 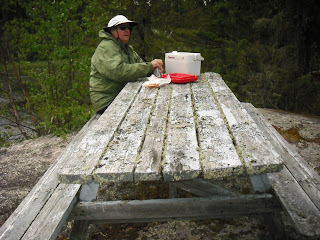 As you can see, it does not look like many people have been stopping by this spot—the picnic table has pretty lichen all over it.

Just as we finish, as my photo through one of the firs shows, the rain clouds begin to threaten again. So we tuck our stuff away, zip up our rain gear and hop in the boat to try to get some fish as they are biting under the drizzle.

Again, though we are trying for Northern, we catch more walleye. So we head back in farther along the river to the spot we were the other day to catch more of the same. 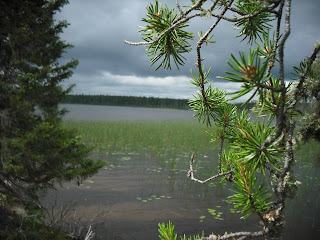 It is growing chillier by now, and the rain makes it off and on hard to see (for us glasses wearers!) We decide to return along the river to Upper Goose Lake and head in—after only about 6 hours.

Dad gets the last catch of the day--this nice sized Walleye! (picture) 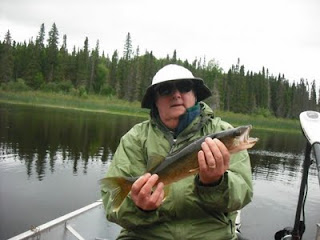 We are both chilled to the bone, even back inside our cabin (not at all rustic camping, folks, really this is kind of like going on an outdoors trip but "cheating" on the roughing it part, which is of course why I like it so much!) and as the temps drop to 49 overnight we stoke up the fire in the cabin's wood burning stove (somebody had in fact left the stove all prepped with kindling to be lit and saved us some work) and get toasty--playing Rumikub & Cribbage again.

In the end, we tuck in early, & both of us sleep fitfully—dad dreaming of bears (oddly) and I dreaming of someone with a pet leopard and panther who, in my dream, everyone knows will eventually turn on their owner.
Posted by Jennifer K Dick at 9:54 PM

Yes, Lisa, still playing card games in the remote places of this world. It has made me think of our card nights in Burgundy this year! I hope you and I will be playing gin rummy again soon!