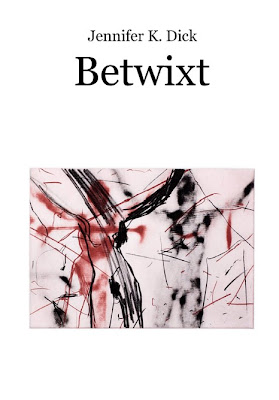 This has been a productive spring--writing, reading, finally getting work into the mail & thus off towards YOU, the world! And now the joy of having two new chapbooks!!!

The first out is BETWIXT (out in May 2011, from Corrupt Press, Paris--see blurbs at bottom of this post).
LAUNCH EVENT:
I am thrilled to be part of the launch for GEORGE VANCE's full-length book A SHORT CIRCUIT (Corrupt, 2011) at the reading where I will also launch BETWIXT. May 10th 2011 at 19h15, downstairs at Carr's Pub & Restaurant, Paris M° Tuileries. With readings of new works by Greg Santos, George Vance & Jennifer K Dick. See more info below as well as a link to Carr's. 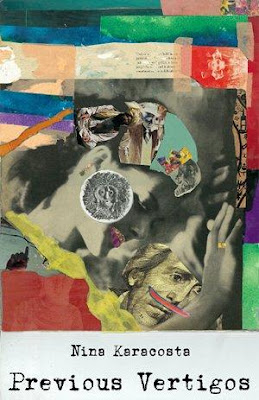 Concerning BETWIXT, the cover image for is by Michele Winkler, an artist currently residing in LA & who I met in Colorado a few years ago when speaking at the Boulder Conference on World Affairs. She & I have been planning to collaborate for awhile now. I am really touched by work she did following the publication of Fluorescence (U of GA Press, 2004). I was really lucky to be able to benefit from some of her current work to use it on the cover pictured here: The cover image is “Mirror Mirror”, a two plate solar etching by Michele Winkler: see a bio at http://www.lessedra.com/artistinfo.php?artistid=306 or visit her site by clicking on her name. Certainly, poems after her works are being worked on--so keep your eyes peeled for future collaborations between us!!!

I would also like to thank Amanda Deutch on this blog. It is she who proposed we develop a series of back & forth poems from which this selection is taken. She was the New York to my Paris, the sometimes Orpheus to my Eurydice, & the othertimes Eurydice to my Orpheus! I look forward to the day when our collaborative collection, including her poems alongside these,finds its way into print! Her energy & our dialogues constantly enriched this work.

As for the new books, both Geroge Vance's book & my new chap are coming out from a brand, spani' new Paris-based anglophone press, CORRUPT PRESS run by UK poet DYLAN HARRIS, (click his name or go to http://dylanharris.org/index.php to see more on Dylan). Their first book was the chapbook pictured at the right--by Nina Karacosta. 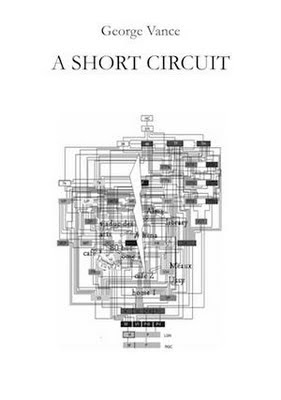 Dylan also organizes Poets-Live where George & I will read alongside Greg Santos on MAY 10th 2011 at 19h15, downstairs at CARR's PUB, 1 rue Mont Tabor, M° Tuileries . There is an event to launch Rufo Quintavalle's chapbook June 4th as well, and I hear rumor that another, later June event is getting planned!

Books will be on sale & beer & spring fun will be able to be had. Hope you can make it: see the Poets-Live site for more on that: http://poets-live.com/content/may-10th-jennifer-k-dick-greg-santos-and-george-vance

As for CORRUPT PRESS, they have already put out the abovementioned chapbook by NINA KARACOSTA entitled PREVIOUS VERTIGOS which will be on sale, & in June the new chapbook, DOG, COCK, APE and VIPER--a sneak peek into a soon forthcoming Corrput Press full length book by this local poet & Nth position poetry editor, 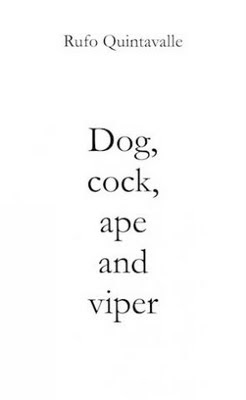 RUFO QUINTAVALLE, will be launched.
I gather many exciting publication projects are en route from Corrupt Press, and am personally really excited to be part of Dylan's new projects. DO help him keep this up by buying a book for yourself and your friends: all of them will be on sale at the POETS-LIVE event May 10th, the 2 events in June and also soon via the corrupt press website: http://corruptpress.net/ Corrupt press is also new on Facebook--so feel free to go to their FB page and "LIKE" them!: http://www.facebook.com/reqs.php#!/pages/Corrupt-Press/193677043997117 They are only up to an overwhelming 24 last count, so check them out and do that liking thing FB has us all into. But Betwixt is only one of the two chaps that I will have with me May 10th in Paris, so come along to also get your hands on TRACERY, my Dusie Kollectiv 5 chapbook. More on that later!

Last (first) words on BETWIXT?
Well, I am pretty excited by the beautiful blurbs I received from poets and editors I admire:

"‘Betwixt’ penetrates deeply beneath and betwixt the narrative of Orpheus and Eurydice. These intermediate and indeterminate spin-offs from the motif are set in a stuttering, probing movement that is ever present in an ongoing gaze that is both backward and forward-looking. The transformative registers and play that Dick draws upon incites the reader through linguistic and sonic verve to question the framework and creases of male and female identity and to see the fragility of pastoral stability and the proximity of loss. Her voice is unerring and unmasking. I love it."
--David Caddy, editor of Tears in the Fence

"“In the ec-, ec- ectoplasm of the echo,” Jennifer K Dick’s new concerto sings vibrato, rocking us boldly into shadowscape of the serpentine underworld of starboard saints the order of Orpheus and Eurydice, those Hansels and Gretels. Lushly and lavishly into the underworld we descend to look and to never look back, to forage forward and toward her lyrical horizon, sinking cock-eared and then tipping into her dreamscapes, begging, “make it double,” please." --Sandy Florian, author of The Tree of No
"In the sinuous descents of Jennifer K Dick’s Betwixt, we are among the debris of doxa not left to lie around an ailing modernist Thames or Rhime, but rather bound up again in the fascicle of a deeper myth-going gauntlet. Eurydice is the by-proxy birth of the lyric, of both its sad and smiling aspects (the marriage ceremony and the broken quest), two divided faces which both promise never to look back. Sex and scalpel, fusion and fissuring, no identity is left unknit in this astonishing revival. So we too may go deeper, into the passages of our choosing: “just follow the tracks in the dark, steady, steadying.”"
--Nicholas Manning, author of Novaless

"In Jennifer K Dick’s wonderful rewinding of “loosely wound” myth, Orpheus and Eurydice are strung out on contemporary anxieties and pulled through the compelling lines of a tensely rhythmic language, an element at once familiar and strange. Description is unsteady, under revision, and flatness and depth make sudden shifts the characters (including reader and writer) negotiate, making forward movement exciting: the stakes are still high, even as we’re reminded the game is lost. Meanwhile the field of the author’s attention is mobile, errant, including the frame or what takes place elsewhere, beyond (around, askew to) a “story.” The subject of this splendid collection is the texture of understanding in its uneasy motion through the “sonorous dark”—in other words, the work of love."

--Laura Mullen, author of Dark Archive & Murmur
"Jennifer K Dick’s Betwixt occurs at intermission—the point at which one act is made historical even as another supplants it. Inside this book, Eurydice and Orpheus wander the streets of Paris (which is also New York), Hades looks strangely like the Metro, and everything pickpockets the attributes of everything else. “Already what’s awaiting is rerouted,” Dick writes, as the tectonics of identity shift, destabilize and reconstitute, ushering forth a postmodern noir that sizzles with cosmopolitan smarts. Just further proof that poetry, like life, brooks no stasis: all is syncopation."
--Chris Pusateri, author of Anon

"Betwixt is a contemporary myth. It’s a “gaze cast,” where the unseenare momentarily seen—within shadow, under the pale light. It’s a diceygame of chance, in which time folds in on itself. Intimacy is heldcaptive and released: “To: think only of her. Not to forget: she is.To: know this.” The impulse to turn leaves us standing still. In awe.Marveling at Jennifer K Dick’s “condensation of meaning.”"
—Michelle Naka Pierce, author of Beloved Integer
Posted by Jennifer K Dick at 9:28 AM