I am very pleased to announce the publication of the next issue of PLU (Paris Lit Up) magazine. This, their 3rd issue, includes a special section I was honored to guest edit. It allowed me to include work by a few of the many fabulous authors we have had the opportunity to hear read for Ivy Writers Paris over the past 11 years here in Paris, France. It is my intention to look into compiling an anthology of Ivy Writers, but I hope that as that project is only starting to get underway this selection of work in PLU III can whet your appetites! Thank you to Jason for inviting me to contribute this section, and to Moe Seagar for including Ivy Writers authors in his fabulous all-day extravaganza reading for 100 Thousand Poets for Change!


And please DO come out to celebrate the exciting selection of work in the new issue of PLU with us Saturday the 26th of Sept. The Ivy Writers Paris authors included are: John High,  Laynie Browne, Michaël Batalla, Dominique Quélen, Barbara Beck, Jacob Bromberg, Déborah Heissler, Virginie Poitrasson and Sarah Larivière. 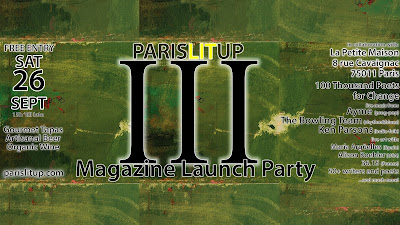 Doors open (les portes s'ouvrent) at 15h.  THE unveiling the new issue of Paris Lit Up Magazine n°3 is at 20h with concerts following late into the evening…. Oh, and bring 10€ for the Magazine!


The event goes all day from 15h-23h but the magazine is officially launched at 8pm.
Posted by Jennifer K Dick at 6:17 PM