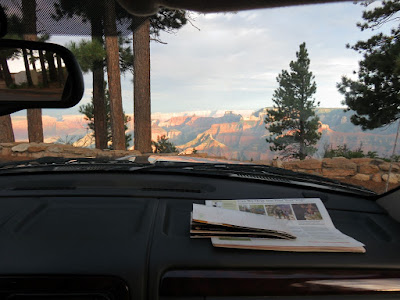 As my friend Sean Standish is moving to the Bay area from Wisconsin and needed a travel partner, we have made the excursion to a new life and job for him into an all out road adventure. We armed ourselves with some of the best travel lit to read aloud to each other and reflect on as well--Jack Kerouac's On The Road and Mark Twain's Roughing it as well as Blue Highways: A Journey into America by William Least Heat Moon courtesy of Richard Kreitner (writer), Steven Melendez (map) 20th July 2015map and text on "American Literature's Most Epic Road Trips" (find that on Atlas Obscura) And from another road trip lit book we stumble upon Rolling Nowhere: Riding the Rails with America's Hoboes by Ted Conover, which we have also brought along.


For more articles and lists on great road trip books, I also suggest the Telegraph's list of the 20 best Travel books or the list put up in 2013 on Buzzfeed by Alex Naidus "The Ultimate US Road Trip Reading List".

As for Sean and my great adventure... it is very much underway. And here are a couple photos from the first days for anyone interested in the images of America as seen this Aug 2015 by two lone midwestern travellers having a great time zig zagging up and down and across the United States.

Day 1: Iowa City, IA to Fort Collins, CO. Across Nebraska on I-80W then down from Cheyenne, WY on I-25S, reading about Kerouac hiking practically this exact route as we drove.


It is after a generally smooth and sunny ride over the "prairies" of Iowa and the "plains" of Nebraska as Kerouac differentiated between them in On The Road, that we pull into the corner of Wyoming where we are blasted by a thundercloud, the road running like a river with water, the darkness of the cloud so sudden and then so quickly heading off so that at one moment there is sun and blue skies in the windshield and almost black skies with a violent purplish tone in the rearview mirror. We turn south towards Denver and begin to see mountains, some of the Rockys are even snow-capped. We turn off on Prospect road and pick up some drinks before heading to join a BBQ with friends in progress. It becomes a surprisingly late night of conversation and catching up. The sound of the crickets fills the air as we sit on the back porch, not being bitten by mosquitoes--this is so delightful to me after time in Canada and Wisconsin this summer. We are treated to a fabulously cozy stay in the basement and though it is only day 1, Sean and I are practically tempted to stop now and move in. But... the road beckons, and up we get the next morning and off into I-25S traffic we went! More soon...