WHAT IS YOUR FRAGMENT IX: Pearl Pirie responds

What is YOUR fragment? Poets explain this technique as it appears in their books (see the original questions HERE and an elaboration on my reflections HERE). Responses 1-8 have been supplied by (click names to see their posts): Lisa Pasold, Marthe Reed, George Vance, rob mclennan, j/j hastain, Michael Ruby Jennifer K Dick and Afton Wilky. This week Canadian poet Pearl Pririe responds. 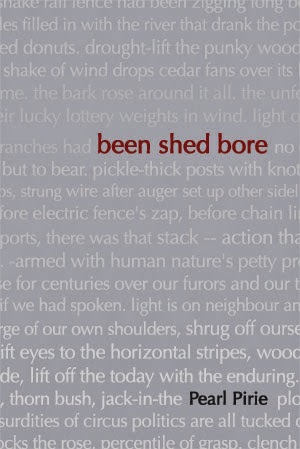 Pearl Pirie has two poetry collections including the pictured been shed bore (Chaudiere Books, 2010), and a third forthcoming with Canadian publisher BookThug in 2015. Her most recent chapbook is Vertigoheel for the Dilly with above/ground, spring 2014, and her upcoming is Quebec Passages with Noun Trivet Press which will be out this spring. Likely. Perhaps even already. She has a few other chapbooks, a micro press, several blogs, a gig as literary radio host at CKCU Literary Landscape and irregular gigs to teach poetry. To find out more, check out her website at: www.pearlpirie.com

PEARL PRIRIE's FRAGMENT:
What is a piece?
A word is already complete. A sound is complete. It’s a matter of how long you want the moment to last without shifting. Freeze face! Strained lopsided really trying smile. Jutted lip. What looks like fragments are many wholes more than many holes.  It is allowing more things to be present than usual. I’m soaking bitter melon and pureeing tamarind; the air smells bitter. The music is more jazz than pop.  I like to work in words and ideas rather than anecdotes. Sometimes there’s a story. Sometimes the background everything is the story.  Omissions worry and chafe me but what is complete? Part of self and world is cut off and I want to reinstate as much as plausible. Pieces from different puzzles can interlock.

A collage is only made of fragments if the one goal is one plain story. A short fragment is already itself. Or one book is only a fragment of a life work.

Is it about distance and expectation, density or direction or closedness?

I wildly speculate if the sensibility of fragments is about poverty/shame, embracing instead of trying to cover it. A closed form is whole bolt of cloth with one owner seems scandalous entitlement. A keeping appearance of having everything together and matching. No off notes except as perfectly timed counterpoint. It works well in haiku. I enjoy making it in some poems but it is only part of the good possibles. Maybe there is no moral of aesthetics to it. It is a different framing.

In fragments it’s a bumper crop. You can go the directions suggested by the writer. A plain narrative seems more true if negative spaces are read, but even that won’t catch what is left out in the bokeh. It seems like a photo with short depth of field of an apple in sun. If you pan back you see the whole clutter of counter and room but you’re only allowed to see this tiny controlled view. The calm seems nervous if you keep looking at. Maybe the fragment is at comfort with nervousness instead of trying to block it. It seems more buddhist, about the lighter levels of interconnection, the patterns that only appear after much more data. If you cut off the story to soon, you’d never get to the repetitions for the patterns to appear. Some see fragments as avoidance, as deflection, as if true is an uncovered simple, and fragments are decorative extraneous instead of intrinsic chaos of the system.

Fragments are patchwork of ideas, about owing instead of owning. The seams are there. There might be less “seems”. Maybe it is keeping self down. A lifetime of mixing registers, being told to slow down, keep to one idea, a hierarchy of reveals, the breadcrumbs to make it easy for someone to follow. But maybe that is more for learning self-knowledge and to learn oratory than to be in the world.  Fragments can be less elegant, messier, more like conversation.

If one can talk about anything in the universe and somehow the story of father’s hat wins, what all is left out? Why stiff upper lip single question mark and not a hall of mirrors question mark tribe? Understated. Stated. What about derstated? and erstat? and unders? What’s skipped? What does the skipping and inclusions ever signify?

Fragments seem more about conversations than oratory. In a discussion you share data but in a linear cohesive narrative, it’s more a prepared speech, elocution where you try to persuade of your conclusion. Maybe in any creative process you didn’t know where it was going or how it would come together.  Each audience is a particular bullseye. Is working the fragment more like darts, or is that the wrong analogy?

Although a fragment embraces a complete, a fragment can be a gap, an ellipses as when from a glosa. I like to use reverse in-fill plunder. This uses the vocabulary, of the source poem but troubles the order, as several poems in been shed bore (Chaudiere, 2010) did. The fragments get different unhitched relationships. By reversing phrase order, nouns become verbs, and like reading an essay in reverse, the elements are more clear. For example, in Jen Currin’s The Ends (Nomados, 2013) in “The Story of the Rifle”, even though the subject of the poem is the mother, most of the pronouns are he for either husband or son. The picked out phrases (1 per line, word order reversed, the line order reversed) become a set of blanks with prompts to go towards, filling in left and right of the source text.

With so much erased and tumbled but knowing the next stepping stone, you don’t know where it will lead or how. Your partner in creation is the language and the frame of vocabulary and life context. With enough filling in the ellipses, the fragments could be glued into one story that may never suggest its origins but more interestingly is to keep the jangle and jumps.

reams of rifles polished of dreams and strawberry trifles

but we are a peaceful creature, returned mother earth
to her equilibrium of slime moulds before we sleep. still they had their kicks,

needs. birds the bothered wanted to see fly so frightened he was
to flight in himself. he flew the oops.

to father the campsite. to child the sidewalk.
still hungry after the toast she did not eat, told and crumbs the plug unplugged.

like she when way behind was moving fast. (watch out walls.)

like the mushrooms harvest ant societies to farm them

So it can be ellipses but a fragment isn’t about brokenness but allowing more wholeness. Fragment-based poems seem more complete. More makes it to the page. A dense network of ideas. More is let in. Letting the reader’s gut understand, as it can.
Posted by Jennifer K Dick at 9:39 AM

Email ThisBlogThis!Share to TwitterShare to FacebookShare to Pinterest
Labels: Fragments in literature, Musings on Reading, Musings on Writing, Pearl Pirie