What is YOUR fragment I? Jennifer K Dick and Lisa Pasold get the conversation started...

I (JKD) think of the use of FRAGMENTS in poetry as falling into a few different categories, such as these three:
1) fragment as ABSENCE: as something which remains when something has been taken away (into which one might put the practice of erasures, but also that of work retrieved but only in part),
2) fragment as bits of SOMETHING BROKEN-- language spaced over a or many pages opening up the white of the page to various ends, fracutred narratives and identities, ruptured languages
3) fragment as ELLIPSIS--making a place for the unsayable, the white page to act as a unit of (unspoken) speech, including in this case a densification of the pause or caesura.

What is YOUR fragment?
Can you take a moment to reflect on this question and also to suggest books which, for you, fall into the category of books you like and/or wrote which for you use "the fragment". Where did your use of fragments emerge from (a particular tradition, reading someone or many people, or realization about space on the page, for example?) AND what do you think the fragment contributes to your work in particular? Feel free to list books you have written which you consider good examples of poetic fragment in use. 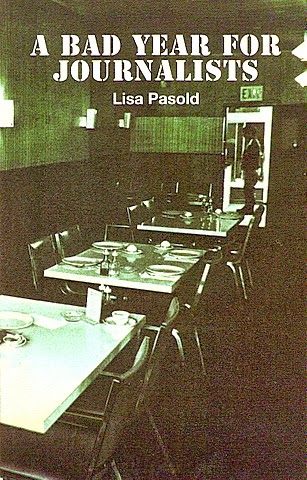 (Lisa Pasold is a Canadian writer and journalist who divides her time between Paris, New Orleans and Toronto. Her most recent book is ANY BRIGHT HORSE. Her first book of poetry WEAVE, was hailed as a masterpiece by Geist.  Her second book of poetry, A BAD YEAR FOR JOURNALISTS, was nominated for an Alberta Book Award
and—in line with reflections on the fragment in her work, Bryan Evans, in Fast Forward Magazine, stated that in A Bad Year For Journalists, "She weaves disjointed memories, from rusty jeeps to lust to typewriters." Her debut novel, RATS OF LAS VEGAS, was described as "enticing as the lit-up Las Vegas strip and as satisfying as a winning hand at poker" by The Winnipeg Free Press. See more at: http://www.lisapasold.com/)
This is what she had to say:

My use of fragments emerged definitely from reading others’ work.

Fragments continue to be useful in generating my own work because of the obvious practical issue of building long poems (which I prefer writing) from my daily writing (which is short gatherings from conversation, signage, reading, thoughts throughout the day).

Relating to your definitions 1 and 2 (fragment absence and fragment as bits of something broken or as ruptured language), my 2006 poetry collection A Bad Year for Journalists most directly uses these kinds of fragments. I wrote these poems as a mash-up of the language from my various journalism gigs: my job in the music industry (writing for Billboard) and other kinds of reporting work, including some experiences while I was in Kenya. Fragments of various friends’ and war correspondents’ life stories, lyrics from songs, and news headlines found their way into the manuscript. I worked on these poems as a quilt, piecing together used and/or left-over lines of language, binding them together to create a new pattern which pleased me. Like a quilt made of personal scraps, I look at the poem and see references to the original source material, but I think the result for other readers is more abstract. This abstraction then makes the work feel as if there is an absence—and that absence made sense to me when writing about the emptiness of journalism. I was trying to discuss how the music industry and the war reporting industry both produce a whole lot of verbiage, yet leave huge unspoken yet officially-sanctioned gaps in which facts are chosen to be discussed. Those absences often appear in the journalists’ lives as an acute experienced rupture from normal life. I was trying to write about the emptiness that journalism can produce.

Now that I think about it, though, I realize that I’m currently trying to stay away from the kind of fragment you define as an ellipsis, maybe because I used it too cheaply early on in my work and when I do find myself slipping into that kind of pause, I am suspicious of my motivations. And yet, all my poetry does come out of an assemblage of fragments.
Posted by Jennifer K Dick at 3:40 AM

Email ThisBlogThis!Share to TwitterShare to FacebookShare to Pinterest
Labels: Fragments in literature, Lisa Pasold, Musings on Reading, Musings on Writing

I'll post an excerpt of my email to Jen.
Fragmenting now comes ‘second-naturally,’ or on rereading or retyping on the computer from notes. But then another question arises: space or runtogether? So is it fragmenting or free-association, or can they be the same? Probably erasure, conscious, unconscious or as impulse, plays a big part; as it does with perception in general: gazing at something for a long time vs capting a series of inputs, as while riding a bus or walking. And reflection : the difference between a brief mental flash of something and inner discourse – an image or idea arising from the unconscious, or conscious (if one is Trying to think, or reading or listening to something), resulting in mono -vs -poly-syllabic utterances that get put down on the page after. Here I mean that the (probably) unconscious figment starts as a flash in the head, is part of a longer ‘explanatory’ idea that one wants to either explore, or skip, depending on how strong the figment is (whether image or idea) and therefore whether it lends itself more to fragmentation or linear discourse.