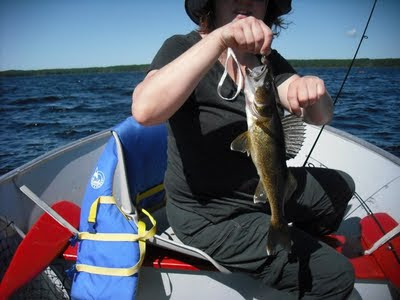 10 July 2011: Sun greets us as we wake around 8:30am. The sky looks delightfully unrainlike, & though our cabin is still cool from the night air, once we step out onto our porch we can tell it is going to be a pleasantly hot day. Summer, sun, smooth lake surfaces &—we hope—fish.

We rub on a bunch of 45spf tanning (or anti-tanning cream as it should really be called!) throw our gear in the boat & are off.

The day, like that Lou Reed song, looks like it is the Perfect Day (click "Lou Reed" or "perfect day" to hear the youtube Perfect Day song in case any of you have forgotten it!) waiting for us to reel in a ton of fish—& on that front it is totally true. But the darker side of Lou Reed’s song awaits us as well. For, after only a little over an hour on a spot out in the middle of the biggest part of the lake (thus most exposed to wind) the wind starts blowing. 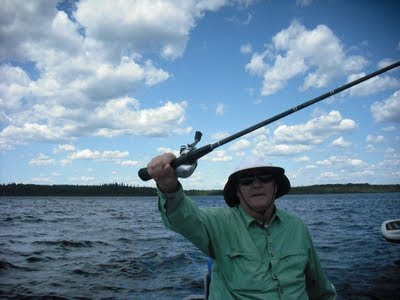 Alhough it is really pleasant to feel the wind on our sun-warmed skin, we are having a hard time staying anchored. Deciding therefore to head to more “protected” waters, we go exploring round some of the islands nearby then dad suggests we head off to the farthest reaches of this very very large lake (Upper Goose Lake--click lake name to see bing map!) & try some spots there both trolling a bit.


For the first time, today we catch nothing trolling, but given the wind conditions some of the other guests have also headed down this way & we see 2 guys who are throwing spinners in along shorelines round islands & in only a few minutes they haul in 2 good sized northern—we are quite impressed & dad vows to hook up our rods so we can do some casting into reedy & rocky areas tomorrow. Why not? Looks like fun. 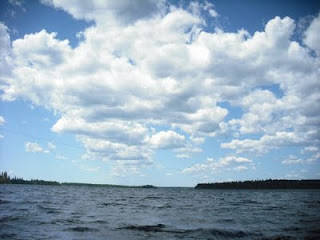 We are drifting along, a little aimless on a few levels, just enjoying the warm day & the beautiful greens of trees & mosses on the shorelines or islands we pass. Dad suggests we go to the farthest shore from camp to a spot he wants to check out.

Not far off, we see 2 of the boats have docked for a shore lunch & have made a small camp fire on a rock while 2 guys are cleaning fish near the shore line.


We again seem to be skipping the usual lunch hour—& again we will discover this is our best fishing time of the day! Because at this point we start fishing along this one shore & though we make some attempts to anchor, with occasional success, it just seems there is no where along this shore we can’t catch fish.


We are pulling so many in, tossing most back out, that we switch from minnows to twisters (sort of fake worms that come in glowy yellow colors & which hook onto our jig hooks) & then again we keep catching fish. 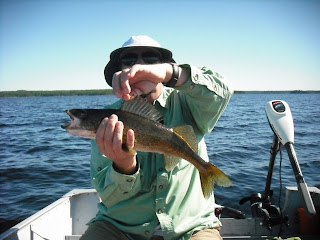 As yesterday, we have a few doubles, & some funny ones—like one where dad is helping me net a fish & realizes he has one on his hook which he had just left adrift for a moment.

We continue to try & anchor well, but mostly keep finding the winds (which we are partially protected from here) are kicking us adrift. At one point we stay nicely attached near a rocky short (see the photos below here, we are really almost touching this shore which drops straight out off shore to 9, 10 then 15 feet—& where we caught a lot of fish—including our legal limit of 4 keepers which are nice walleye we cleaned & froze to take home for mom). 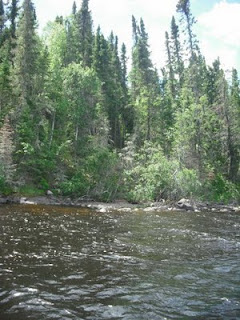 We are pleased to have been able to stay stable for so long & dad has made a few jokes about whether the anchor caught a rock—which is not something you want, as with the wind pushing us, if the anchor catches a rock it is hard to impossible to get back up.

In the end, as I do the lugging of the anchor up, it is evident that we have caught something, but something that—with a TON of effort—I am able to move. I feel almost convinced that I am lifting with the anchor a pretty nice sized stone. I haul, using my arms, shoulders, back, but even pulling the rope over my knees & stepping on it so as not to have any slip back letting the anchor drop back down. Finally, we see that I have a tree. Not a branch or a log but an entire tree—it stretches from shore & as I hoist up it crosses under our boat & out the other side. The anchor? One of its prongs is nicely tucked under the entire trunk of this little but still hefty tree. 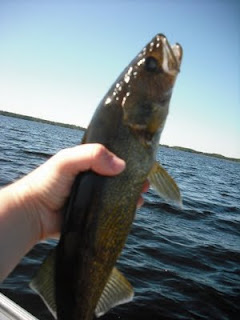 I try my best to get the tree loose, to unlatch it from the anchor's prong, but am not strong enough. So, dad switches places & manages to hold the tree up with one hand while dropping the anchor back down & thus away from the trunk. I must admit, I had looked at the trunk & was personally not feeling like grabbing ahold of it with my hands! After all, I have seen a TON of leeches swimming round in the water, next to the dock in the sand even—by some cute tadpoles. So, I feared what might be nicely embedded in the long-soaked bark of that slimy submerged tree. Dad? No fear there.


& so, finally we were de-anchored, & turning towards “home” base.


But as we got the engine going & pulled out from this little shoreline & its partial protection from the wind, it was evident that there was now a flaw to our “perfect day”: the wind. 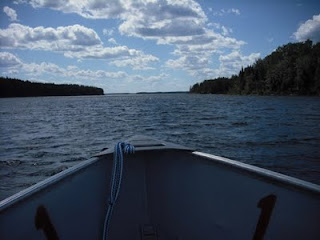 If we had been spending today on shore, that wind would have been a delight, keeping us nicely cooler than the hot sun. But knowing we had most of the long (& in parts very very wide) parts of the lake to cross, & straight into the wind, into white caps rolling towards us, it became quite nerve wracking.


As we headed towards camp, the idea was to head straight into most of the big waves (thus not get tossed around or rolled) & to head into them at a certain speed so they could not come over the bow of the boat (thus to hit me where I was sitting) It was a lot of BUMP up BUMP down. As you can barely see in this photo—where the size of the waves is not so evident, because it was a moment when I was not holding on as much & thus could take the 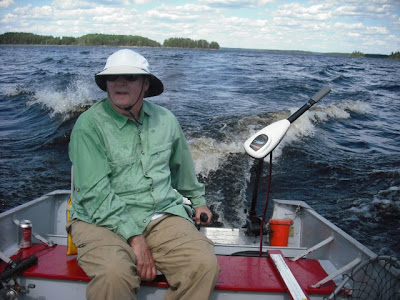 picture—dad is getting quite wet from the splashing. Me? Not so wet, just having my body smashing up & down on the crests.

Even now, hours later, my head & body feel the rolling of the lake—very sealike (on a much much smaller scale) All I could think was “Glad I don’t get seasick” & “I hope this boat will not break in two, or crack” Dad wasn’t worried. I think he has seen worse by far. Me? I was also calculating the distances to shores, islands & rocks, thinking—well, it IS a nice day out, so if we do find ourselves swimming…. But no, no swimming had to happen, nor was there really a risk of it.
We pulled back into Bull Moose Camp after our 6 hours out in the boat. Though we thought we would head back out again in a few hours, assuming the wind would die down, we instead decided to call it a day—refilling the line in one of the reels, setting up the spinner/casting rods & baking—dad made us an astounding what he calls “easy gourmet” dinner—of walleye stuffed with stove top stuffing mixed with a can of crab meat. I added a pan of brownies (thanks to the owner of the camp, Shara & Tom, lending me the pan to bake in! They are really wonderfully nice, and their camp is fabulously well organized and tidy and friendly!) to make use of the oven at the same time & dinner & desert were splendid!

After dinner, we played a game of Rummikub at a picnic table outside by the beach in the early evening sun, then gave a few final casts off the dock for a humorous end to our day—our last “double” says dad—when he actually caught a clam! Yes, a clam had closed round his bait & he hauled it out just as I caught a mini sized walleye. I tossed my fish back, & dad let his clam sink back down to the bottom of the lake just as the sun was doing its final setting.
It was still windy & a storm looked like it was brewing someplace farther off in the distance. We went inside before the mosquitoes could swarm us & played cribbidge til around 10. By then, the rain had come & soon went. Insects swarmed the screens & under the path light outside, thousands of them! Thank goodness for excellent screens on this cabin! 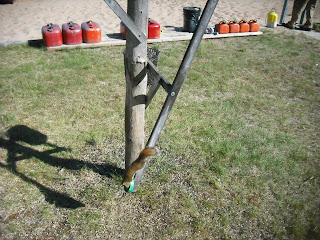 As I watched the insect frenzy, captivated, I thought how if there were bats around here, they would be feasting! & maybe there are, but I have not seen them.

I have seen—many baby squirrels (as in the one pictured here clinging to the peanut butter lid on this great birdfeeder animal jungle-gym), chipmonks & a groundhog, seagulls, tadpoles, leeches, & some magnificently pretty bird that is white & shaped a lot like a gull but has a black forehead & beak, an eagle, the 4 moose en route here along with the deer then too. This is probably not an area one goes off hiking randomly in, however, as the opportunity to run into many many other wild animals certainly would present itself! Best stick to the waterways!
Posted by Jennifer K Dick at 11:52 PM