From Bull Moose to Mamakwash Lake & back 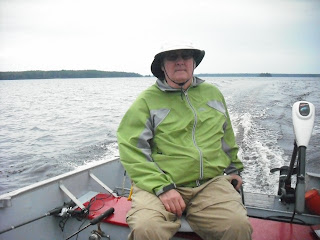 9 July 2011: a leisurely waking (9am or so)—rested, we look out at a morning which is off & on spitting rain. It is cooler, too, so we put on slightly heavier gear & after a wonderful breakfast of eggs on English muffins toasted over the stove burner we are off after more fish.

When we get into the boat, the rain has pretty much ceased already. We are ready to go with 2 dozen fresh minnows, our minnow-fishing rods & 2 trolling rods with rappalas.

Dad decides we should stay out of the middle of the lake in the rain, & wants to try out a place on a nearby lake that he has visited when here a few years back with my brother & brother in law (Kevins) & Kevin G’s dad. To get there, we motor off of 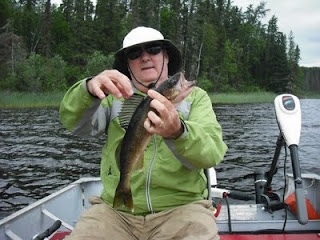 Upper Goose Lake along Beren’s River into Mamakwash Lake. We spend quite a bit of time trying to find a nice depth for fish, but aren’t having a lot of luck.

We catch an occasional small or medium sized walleye (as evidenced by this picture of dad showing off his nice sized walleye with fin), & I pull out a surprising perch (pretty orange-red stripes along the side, a generally tiny fish but this one was a nicely edible size—& perch can be delicious!) but nothing to write home about. 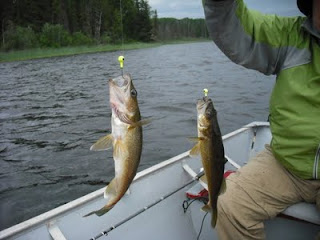 About to give up & head back for lunch, dad suggests a little spot along the river. There, just back around the first bend off Mamakwash we start hauling them in—as evidenced by our photo of one of our doubles (yes, there were many “I’ve got a fish” “Me, too!” moments)

None of the fish were enormous, but some were pretty good sized (our standards had gone up already after catching so many Walleye over 19, 20 & 22 inches the night before, as well as my whopper 27incher). So, instead of lunch, we hung around that pool for quite a while. Then we decided to troll a bit of the river en route back to our lake. 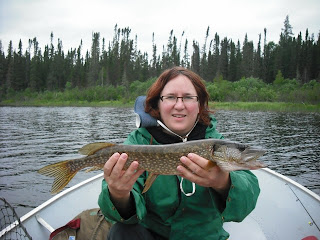 I caught a pretty nice little sized northern—not too small not to keep & not too big we had to throw him back (see the photo here of my perch—the tiny fish—& northern on the fish cleaning block). 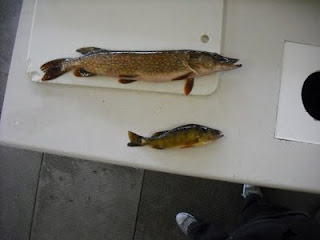 For anyone who fishes, you might be impressed by the cleanliness of the fish house here at Bull Moose camp—it is constantly cleaned & everyone is careful to follow the instructions to help keep the place tidy, easy to use & not smelly (not only to not attract bears or other animals, but also to make us humans want to clean our fish in there!) 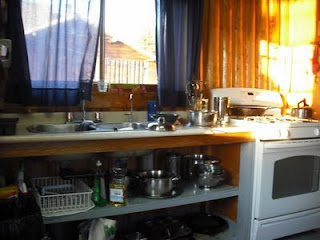 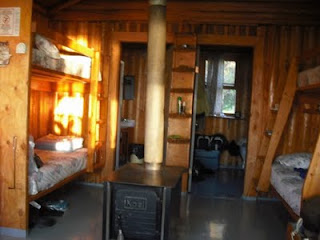 We have a very late lunch in the lovely cabin we are staying in here at Bull Moose Camp (see pics here--I am sleeping on the bunk at the right and my dad has the little room at the back right, the bathroom is through the other visible door, and up front is this full kitchen with stove & complete oven). After our lunch of blackened Cajun spiced walleye & northern pike filets with a pre-packaged mix of cajun rice with red beans (yum!), we headed back out onto the lake again. 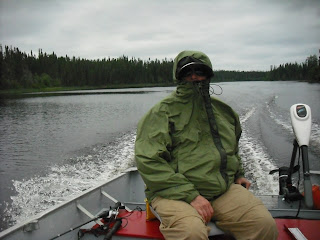 But as you can see, we were chillier—had wrapped up in our rain gear to keep out the cold wind—which is particularly strongly felt when we go top speed over the lake to head to some destination or other.

We headed back to the “hump” as it is called, & tried our luck, but the wind made fishing a little more difficult in this exposed spot out in the middle of the lake (thus which has no wind protection) & we again were catching mostly smaller fish, meaning nice sized 15 to 18” walleye, but also a few jokers—I seem to be the most skilled at getting the ones that might be mistaken for bait onto my hook! 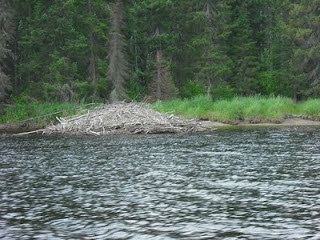 We returned therefore to Hog haven, which is more out of the wind, & again caught some fish & explored some other areas around there. I snapped a nice picture not far from there of a beaver damn. At one point I saw an enormous bird take wing, coming up out of the trees along the shoreline not too far off. At first I thought it was a hawk, but then I saw it was far too large—it swooped closer & it soon became clear we were seeing a bald eagle, with his wonderous wingspan & white head. & as quickly as he had soared into sight, he soared off over the nearby island & out of sight. 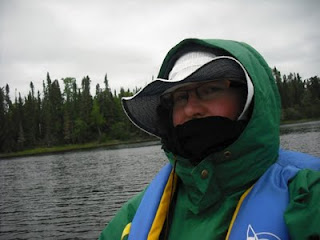 But by then many things were beginning to vanish---for as we looked back towards the main body of the lake which we would need to cross to get back to camp, the land & islands that help map out our route were vanishing into a misty rain, whitening, being erased by the low level clouds & soft layer of precipitation. It was chilly, too, by now. So, as we had had a lot of fun out in the boat for the day, we decided to head back while we could still easily make our way (& in fact the sky & mist lightened by the time we got to camp!)

Day 3 (day 2 of fishing) at Bull Moose Camp was drawing to a close. We cleaned up our boat, pulled it up onto the small beach shore (with the help of Eric again, proving that both dad & I are, well, somewhat whimpier than either of us would like to admit!) & headed inside. Dinner? A small salad & half sandwich—we were still full from our late lunch of Cajun blackened fish. Exhausted, we headed to bed early, looking forward to tomorrow--a day rumored to be bringing sunlight & warmth.
Posted by Jennifer K Dick at 11:22 PM