RSVP & book in advance via Contact Martin Penny at Tel: 0207 4873570
or via email at oxfammarylebone@hotmail.com

The Oxfam poetry series has been running for six years, since 2004, when it was launched by Sir Andrew Motion & Wendy Cope. In that time, the series has featured over 100 leading poets, & raised tens of thousands of pounds for Oxfam's work to alleviate poverty & suffering.

AUTHOR BIOS:
Barbara Beck, originally from Minnesota, is a poet & translator who lives & teaches in Paris. She has been Editor of the Paris-based English language journal Upstairs at Duroc, since the fall of 2002. Her work has appeared in The Los Angeles Review, Van Gogh’s Ear, The Chariton Review, The Literary Review, Slightly West, nthposition, In’hui & elsewhere. She has published several books of poetry translations, the latest of which is a collaborative translation done with French poet Dominique Quélen of Livingdying by Cid Corman, published as Vivremourir by L’Act Mem in 2008. Recent translations of Christophe Lamiot’s poetry appear in the Paris artspace, the Centre 104's la review 104 online in its English version & with sound effects at http://www.104larevue.fr/EN/index3.html. Beck has also been involved in numerous collaborative poetry projects & in multivoiced performance reading groups, such as Quadriphonics, The Midnight Poems & Rewords (http://rewords.blogspot.com). She has read in Paris and abroad. To see a sample poem of hers, “Spring Gathering” is online at Nth position: http://www.nthposition.com/springattherendering.php. For more information on her magazine, now in its 11th edition, & which will be available at the event, see Upstairs at Duroc at: http://www.wice-paris.org/courses/creative/upstairs-duroc.html

David Caddy: Poet, Writer, & Critic who edits the international literary magazine, Tears in the Fence for which he writes the Afterword column. His most recent books are Man in Black (Penned In The Margins 2007), The Willy Poems (Clamp Down Press 2004), & London: City of Words: a literary companion (Blue Island 2005) which is co-written with Westrow Cooper. He presents So Here We Are: Poetic Letters From England monthly on Miporadio. These talk / essays are available at http://davidcaddy.blogspot.com & a first series of So Here We Are is due for print publication by Shearsman Press, UK, in 2010. Caddy also writes the occasional episode of Middle Ditch, an internet drama serial, & regularly reviews for the Use of English magazine & for the quarterly poetry & art publication Oranges & Sardines online magazine (http://www.poetsandartists.com/). He has been published in newspapers, journals & anthologies around the world. Caddy was the founder of the East Street Poets, when it was the largest poetry organisation in rural Britain. Through this organisation he presented twice-weekly poetry readings, workshops, residential writing weekends, walks, seminars, outreach activities, educational visits and the legendary annual 4-day Wessex Poetry Festival, which Caddy directed from 1995-2001. Described by the critic, Jay Parini, as "the Robert Frost of the Blackmore Vale", David Caddy lives & writes in rural Dorset, surrounded by the "mud & root" that inspires his work, about which critic Ian Brinton writes in his book Contemporary Poetry: Poets & Poetry since 1990 (Cambridge UP). Caddy teaches poetry, fiction, drama, comedy & script writing, & is also a freelance lecturer in modern & contemporary English & American poetry. He has read his poetry on television & national radio in Britain & Europe, as well as abroad (recipient of a British Council Travel Award to read in Southern California). Hear some samples at his blog or on http://www.myspace.com/davidcaddy

Brentley Frazer is a Poet/Writer & Visual Artist from Australia. He currently has no fixed address & is wandering around Europe while he works on a collection of Short Stories. There are currently 2 collections of Poems/Microtexts by Brentley available: Memories Like Angels at a ball Tripping Over their Gowns (2007) & A Dark Samadhi (2003). His poems & other writings have appeared in anthologies such as Moosehead X: Future Welcome (DC Books, Canada, 2005), Brilliant Future: The Butcher's Saga (with Fakie Wilde, Impressed Publishing, 2004), In the Criminal's Cabinet, (Nthposition Press, UK, 2004), & SHORT FUSE: The Global Anthology of New Fusion Poetry (Ratapallax Press, NYC, 2002). His publications in magazines & periodicals include work in 3am, Big Bridge, Cordite Review, Identity Theory, Tiger Magazine, Exquisite Corpse Journal of Letters, Jack Magazine, Stylus Magazine, The Age, Australian Reader,Nthposition, The New Aesthetic, Sidewalk, JAAM, fusebox, Rattapallax Magazine, The Courier Mail,The Bohemian Aesthetic, Get Underground, & Mad Hatters Review. Brentley is also the publishing editor of retortmagazine.com which has been placed in the the top 10 online publications of it’s kind by media giants the Guardian UK & The Colombia Journalism Review in New York. He has been described variously as a “Literary Outlaw”, a “21st century Baudelaire on acid” & “the lovechild of Kafka & Burroughs”. For more information, links to books, anthologies & to gallery shows of his artwork, please visit his homesite http://www.brentley.com

Rufo Quintavalle was born in London, studied at Oxford & the University of Iowa & now lives in Paris. He is the author of a chapbook, Make Nothing Happen (Oystercatcher Press, 2009) & his poems have appeared in numerous print & online journals around the world, including Barrow Street, The London Magazine, The Wolf, Great Works, Shadowtrain, Versal, NO/ON, MiPOesias, The Stinging Fly, Smiths Knoll, Carolina Quarterly, Transcript, P.F.S. Post, & Paris/Atlantic. He helps edit the Paris-based literary magazine, Upstairs at Duroc & is Acting Poetry Editor for nthposition. He participates in the online collaborative poetics site “Rewords”. Work as part of an online exhibition called Public Pages can be seen / read at http://www.falmouth.ac.uk/1057/public-pages-40/artists-390/rufo-quintavalle-2355.html. He is currently working on a book-length response to Whitman's "Song of Myself", extracts of which can be found at www.retortmagazine.com.

Ohio-born poet, George Vance is most recently involved in experiments with word/image fusion, tags, & street art. His hybrid language & image video installation, "HEIGHTS", was exhibited in Brussels in 2006, & he recently designed a 'totem' sculpture with a Kanak artist. Author of Bent Time, a chapbook, his poems have appeared in Paris in Pharos & Upstairs at Duroc. He has read at numerous Paris venues including The American Library, Wice, Paris Writer's workshop, Live Poets, Ivy Writers Paris, The Red Wheelbarrow, & as part of the multi-voiced performance group "Quadriphonics" (with Jennifer K Dick, Michelle Noteboom & Barbara Beck). Vance has lived in Liberia, Austria, Germany, France & the French Overseas 'Country' of New Caledonia/Kanaky. Some of his recent poems can be found on the collaborative poetry blog "rewords", of which he is a member: http://rewords.blogspot.com

Jonathan Wonham, born in Glasgow, now lives in Stavanger, Norway where he works as a geologist. He has been published in Poetry Introduction 7 (Faber) as well as numerous magazines & anthologies such as New Statesman, London Magazine, The Wolf, Magma, nthposition, The North & Thumbscrew. His book Steel Horizon: North Sea Poems is forthcoming from Incline Press. From 2005-2008 he assisted with the editing of Upstairs at Duroc magazine while living in Paris. His home website, which includes samples of his poems and photographs, bios, and other information, is found at http://homepage.mac.com/wonham/Poetry/Menu66.html but he also keeps many blogs, including ICEBUS with great photos of ice-coated regions of Norway at http://www.icebus.blogspot.com/ & Connaissances at http://connaissances.blogspot.com/ and he is a member of Rewords. He was recently interviewed about the body & language, & poetry & science for Qarrtsiluni online literary magazine at http://qarrtsiluni.com/2005/12/04/bodylanguage-an-interview-with-shen-and-jonathan-wonham/ He holds a phD in sedimentology & is also an avid photographer.

For a MAP to our Oxfam reading event on July 14th at 7pm, see http://www.oxfammarylebone.co.uk/contact.php

Been remiss with the blogging, but my 2 most recent artseen 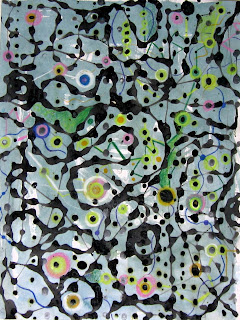 articles have gone up at Richard Nahem's Eyepreferparis blog, today's about Maryanne Pollock's work which I saw while visiting Grace Teshima's (publicity image from that show at the left here), and last month's text about Boris Achour.

For last month's article on Boris Achour: http://www.ipreferparis.net/2009/05/artseen-boris-achour.html or, again, access it by clicking on the title Artseen VII: Boris Achour.

Many things have yet to be blogged since the PhD defense, but that is mostly because I have been resting, enjoying Paris, going to hear friends read, and finishing up the end of the year at EHESS.
Posted by Jennifer K Dick at 9:50 AM No comments: