This week, from Iowa, where the government has not set into law the same official restrictions as many other states, we are already folded within our homes. Our home. My childhood home—in my parent’s house in the slip of what remains of the woods between I-80 and the Iowa River as one wends one’s way out of the center of Iowa City on Dubuque St towards the Coralville Reservoir. From here, we can hear the traffic blast past on the interstate like a rush of somewhat muted white noise while we watch the eagles who have nested along the bend in the river below the steep almost-cliff slopes beyond the slip of woods rise up through the still-leafless trees, into bright blue sky after the snows from Saturday have already melted. 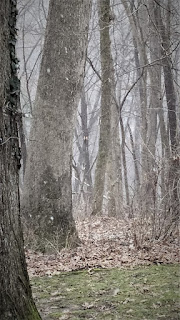 Damp leaves needing raking stick to old tree trunks and wet grass. We go out. There is no one else in sight. Our feet leave prints in the soft earth. We watch chipmunks and squirrels, darting birds in preseason courtship. The deer who often come to lounge in the middle of the backyard have yet to pass by, and the hummingbirds, too, have not returned. There are no rabbits yet, either, though soon enough, I know, they will be bounding about everywhere in twos, then fours and sixes. There are, however, hints of rose-white buds at the tips of one tree: the promise of flowers and fruit to come.

And then we go inside. The news is on and there are reports and reports of reports and comments on reports. We watch the Task Force and their contradictions. We keep a keen eye on the worldometer, watch daily, hourly, as the numbers rise in every column. Even the recovered, you think. But the percentage of deaths has come up to 15 for resolved cases though the percentage of serious cases in the “active” box remains the same: 5%. I check China, France, Spain, the USA. I look farther down on the list. Looks pretty good in Nepal. We have never been to Nepal, not one of us. I suppose this is not the moment. In Iowa the number of cases strikes 90, then climbs. Today we are at over a hundred. But no deaths. Yet.

I watch my adoptive home town on the screen. In Mulhouse, France, there is the scramble for more doctors, nurses, beds, care. The hospital (off and on on strike since June 2019 because of a lack of ER staff Doctors and caregivers) is overwhelmed. It has been working over capacity for 3+ weeks now. Yet the town everyone has always said “where?” to has inched its way into the local newspapers, radio programs, TV spots from London to Iowa. In Mulhouse, we see, the military begins to airlift patients to other parts of France. The military is constructing a massive outside tent-hospital in the parking lot across from the regular hospital. No one I know is hospitalized. News pours in little by little of doctors passing away: 3 so far. Instagram videos of balcony serenades for medical staff go viral. Clapping in the dark under a sky of silence. Then, a friend writes, the roar of helicopters begins their nightly rounds.

I receive emails and text messages: “We are ok, but the news next door is not so good.” “We only have a mild case.” “We are working at home, feeling the effects, but will pull through.” Silence.

The first week of quarantine: people are (mostly) fine. They go out (too much). They do not really fear (going out) (getting it). Or they fear (everyone dying). Both (extremes). The apartments are cloying, tight, small, full of activity despite despair. “Too much to do” “To occupied with... to find the time for...” but the news shows more images of worsening conditions in Italy and Spain. We do not want that here. We see it coming. The worst thing about quarantine is... the list keeps growing. It is hard to know. From here, perhaps, the worst thing about quarantine is just waiting for the inevitable.

This week on Christophe Fiat's Instagram "Tea Time / Rien ne va plus" I was also invited alongside numerous authors from France and elsewhere to supply poems for the 21st of March 2020 World Poetry Day. I wrote 4 "Tea Time"s in French: which appeared on his instagram feed and were also republished as photos on his FB page, and they appear also on my own.
Posted by Jennifer K Dick at 6:06 PM