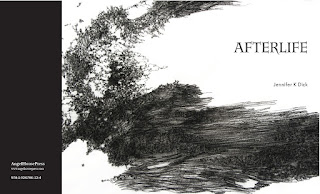 Jennifer will read from the cross-lingual text Afterlife, published by AngelHouse Press, Canada in June 2017 and extracts of some new work.

The reading will close with a few songs from Bremner Duthie!

On Afterlife:
"The echoing question of the mark that language leaves on us all and makes of us all is celebrated here in Dick's lyrical recall of the invention of drawing, while her English/French parallel enacts the question of presentation vs representation in yet another way. The parts all come together in a marvelous tumult, endlessly breaking down and endlessly rebuilding." —Cole Swensen

“The ideal creator: Jennifer K Dick articulates the inventor/invented myth of Dibutade in delicate charcoal words that revel in the limits of language.”—Lisa Pasold 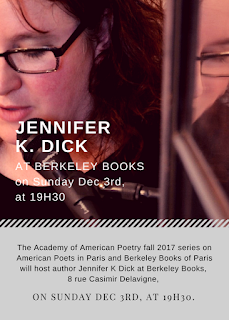 who now resides in France. She is the author of CIRCUITS (Corrupt, 2013), ENCLOSURES (BlazeVox eBook, 2007), FLUORESCENCE (University of GA Press, 2004), and 6 chapbooks, most recently Afterlife by Angel House Press, Canada (2017) and Comme Un n°9, a collective work with 4 Japanese artists (2017). Jennifer is also the editor of two critical books on translation theory in the social sciences and translates French poets. She has been curating Ivy Writers Paris bilingual reading series since 2005 and the Ecrire l’Art mini-residency for French authors at La Kunsthalle-Mulhouse since 2010. Her increasing interest in collaborative projects with other authors, artists and dancers led to a 2016-2017 architecture-text installation at the Basel SBB Train Station in Switzerland (visible at https://www.youtube.com/watch?v=Nmye8THGxww) and the 75 minute live show Traces de son amant qui s’en va (May 2015). She is part of Le Collectif with Italian and French poets from which the 2013 Benway Series Foglio 9 was published and 2 films, one in which she reads, Le Moulin by Gilles Weinzaepflan, 2013, (https://vimeo.com/101581345). Her poem Radial filmed by Lisa Pasold is at https://www.youtube.com/watch?v=qhFqjW0hruw New work appears in Parentheses (Barcelona), Tears in The Fence (UK), BlazeVox issue 17, and is forthcoming in the women: poetry: migration anthology from Theenk publishers, NY (2017). Jennifer currently teaches for the Université de Haute Alsace and will be doing some guest teaching for Kent University UK's Paris MFA program and Naropa University in 2017 and 2018. She also co-organized the international conference Poetry in Expanded Translation 2: Intersemiotic Translation—between text and image, which was held in Mulhouse.

The Academy of American Poets posting about this event is at https://www.poets.org/poetsorg/event/presenting-american-poets-paris-jennifer-k-dick
Posted by Jennifer K Dick at 9:40 AM