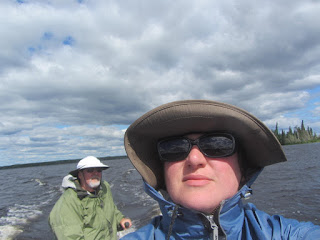 This blog posting is, yes, a bit post-event, but it is also nice to post about the trip even though it is now over. So here's to looking back at Day 5 of my fishing trip with dad to Upper Goose Lake and Bull Moose Camp.

Though the rains had stopped and the sun was back out, the wind remained. The lake was choppy and it was difficult to stay in one spot or even to cast into shorelines as the wind would not only take the bait and fly wildly off with it but it would also push the boat too quickly in one direction or another. So, as we had already discussed, we decided to go around the bend in the lake and fish up a river that we think was called Baron’s River . We stopped at the mouth of the river and fished round a big rock and caught a few before taking the sinewy river bends, casting with little success this time until we got close to the intermediary South Lake . There, we found some nice drop offs and pulled in dozens of fairly tiny walleye. Dad felt a bit hopeless after a bit about finding anyone larger and so we passed through the edge of South Lake and then back around to where the Baron’s River continued again towards a long reed bed and around some more sinewy bends to a rapids. There, we got out of the boat and anchored it on land while we fished from shore for a bit. I caught 2 northern right up in the falls on my “flippy floppy” bait as I like to call the surface spinner (szee me pictured below with the first). Dad had gone to the other end of the falls and there he caught a walleye right away (he is pictured below trying for another and then with the 2nd surprise walleye in hand) 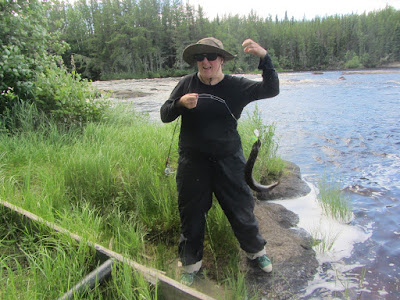 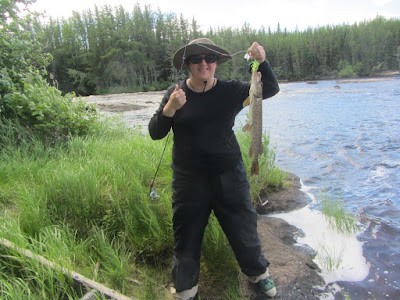 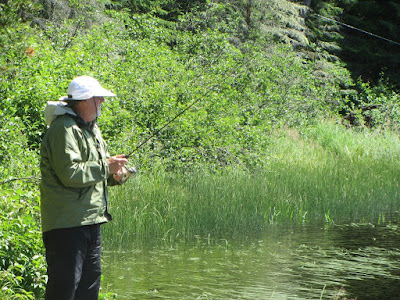 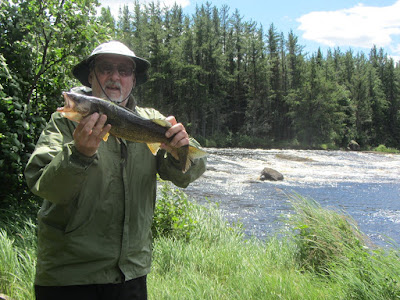 We paused to eat the packed sandwiches I had brought and drink a beer in the sun watching a ton of industrious ants along a nearby set of boat portage rails. Dad was peculiarly flustered by this butterfly that seemed to have taken to his shoes and which kept landing on him. I told him having a butterfly land on you was good luck.

After our pause we returned to fishing the falls a bit more and dad caught a massive tree, dragging it almost out of the water before losing his bait, then losing another, which brought our rapids fishing to a close. 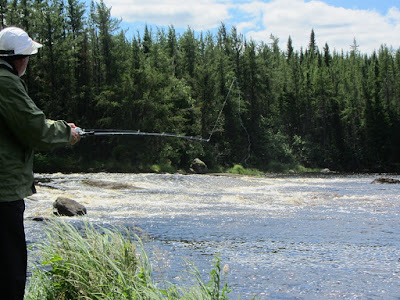 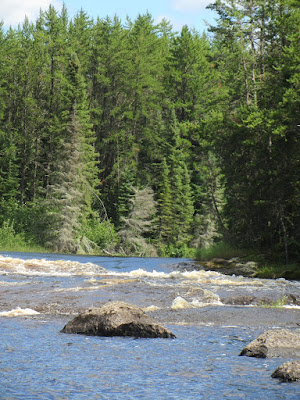 Back in the boat we went around the other side of the falls to try for more northern, but having no luck we fished the river on our return journey, getting a few near the large rock before returning to Upper Goose Lake which was still fairly wavy with some white caps. We decided to go in for a break (having been out for a little over 5 hours) and to let the wind die down. Just when we thought we would park the boat for the night Tom, from Bull Moose, told us not to give up hope and that soon the wind would calm down. So, we had an early dinner and then saw that the lake had become totally placid and clear and so off we went to fish the second hump out in the big lake.

There, we caught a great number of nice sized walleye and enjoyed another gorgeous sunset. As we boated home during the sunset the sliver of a moon became visible in the colorful sky over the islands marking the return path from one part of the lake to the other and back to Bull Moose. It was a wonderful penultimate day of fishing for us. Which we ended with a bit of ouzo toasting to a day of fishing in no rain.