THE NEXT BIG THING! from Jennifer K Dick 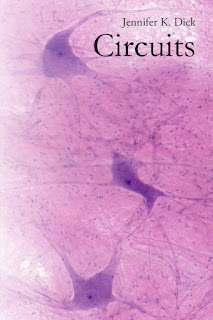 I was tagged by the awesome author Marthe Reed to take part in The Next Big Thing, a series of self-interviews with writers who have new books from small presses--each writer tagged then tags another set of 5 writers (see my 5 at the end of this post), until we have tagged ALL the new authors in the world—or the blogging-tagging is a sort of pursuit of new books and a way for all of us to discover authors we may not have already known! To Read Marthe's The Next Big Thing, go to: NOUS-ZOT

FYI--The questions below are the same for everyone, but evidently the answers vary.

THE NEXT BIG THING  for Jennifer K Dick?

What is/was the working title of the book?
The book was always called CIRCUITS. From the get-go, this title felt for me a little electric, about neurons firing and all those connections we have yet ti locate or which get dislocated in our minds and memories just as they do in circuitous language.
Where did the idea come from for the book?
The idea for the book came during a dry spell of writing when I got into reading pop sci books. I admired George Johnson’s In the Palace’s ofMemory and could not get over the cool weirdness of his chapter titles. Then I started playing around with the language of his popular science, intermingling it with that of memories and recollections, and the two fused, confused each other more and more and slowly over a period of literally years these poems emerged, re-emerged, were rewritten and thought about and felt and then began to be sent out and then there was the book, and then versions of it. In fact, this book--Circuits--is likely the product of one of the longest revision processes I have ever undertaken. Some of these poems were drafted in 2003 and still this past year--even months--as my publisher and I went over the proofs I added more changes and polished out jagged edges.
What genre does your book fall under?
Poetry.
What actors would you choose to play the part of your characters in a movie rendition?
Creepy thought, really. There would be a lot of actors as the poems are about relationships in a way, or paths of relations. I think sometimes an actor could be fused into another. I think I would love it if some were filmed with blaring angry heavy guitar and drums—melted to urban sounds of train screeches or combustion. Others would need to be in silence.
I would like Valérie Mréjen to film some, and perhaps Sophie Calle others. Some feel like Tulle and others like rock trash. Anyway, I would need each section to be a short. Perhaps some character-actors would reappear, like a Lynch scientist type played ideally by a young Jeff Goldblum, the Goldblum we remember from his role as Watson in the Race for the Double Helix. Other scientist types could be played by Michael Emerson (he could even maintain lots of his quirks from his character Harold Finch on “Person of Interest”). There is certainly a female who comes in and out of a few poems and who could repeat in scenes—someone overthin, fragile, would be ideal for that role—or, better yet would be to have 2-3 women play that one role, echoing and overlapping the same scenes, lines, gestures, expressions—to imitate the way I like these poems to go no where, get trapped in the theories of their own selves, their own recollections. So perhaps overlapping a varying set of disguises, as in versions of Tilda Swinton (like she looks in “We need to talk about Kevin”) and a glasses-sporting and a far less typically cowgirl American girl next door version of TriciaHelfer with a brunette version of Sarah Michelle Geller with a mousy someone who is dark haired and perhaps just post-teen to mix in with the the others—an Anne Hathaway with that excellent short cut? Younger women would also need to be cast to play these same characters at a different moment in time. Ideal would be actors we have never seen but who are good on screen.
What about some of the other males? I’d need a bully, someone who looks a bit beat up or gruff like the guy staring in the new Arrow perhaps—but not as stiff or muscly as Stephen Amell. Someone more “real” than your average Hollywood male. Also, Denzel Washington would be a great addition for some of the male roles—the voice and movements of the advisor in certain poems, directive, reflective, someone with a great reading voice.
Other random wild extras would certainly be appreciated as walk-ons, and figures—an Emily Dickinsion perhaps played by Isabelle Huppert (with an edge of that look she had in la pianiste) would be great, and I would like a Wallace Stevens, a Danielle Collobert played by a red-haired Mary McCormack and other authors who are named or whose lines are remangled to appear and be present in the scenes.

Actually, thinking about a filmed scene of one of these poems is pretty fascinating—how odd or how normative they could be depending on who directs, films and imagines them.
What is the one sentence synopsis of your book?
Circuits are the library of entanglements we carry inside our heads/bodies
How long did it take you to write the first draft of the manuscript?
So long and in so many layers I could not really say!
Who or what inspired you to write this book?
Life, years of failed romantic connections, a fascination for trying to figure out how things tick and thus find solutions to problems that in the end are metaphysical or beyond the puzzle solving me. Language and my interest in unstitching meaning, restitching it to sound. Density of exploration. And of course George Johnson’s book In the Palaces of Memory (Knopf 1991, Vintage paperback, 1992).
What else about your book might pique the reader’s interest?
I personally put a lot of effort into what happens visually on these pages—how the text sits and moves. I hope that will be of interest to those interested in form.
Also--I think that the book will be interesting to those people who like popular science books on memory and neurology. The mazes of these poems are in no way as elaborate or exciting, of course, as the mazes of our own minds.
Will your book be self-published or represented by an agency?
Corrupt Press who published my chapbook called Betwixt is publishing CIRCUITS this month—so check Corrupt Press' website (also run by its Founder and Editor in Chief, Dylan Harris) for updates! The only issue is they are not yet represented on Amazon as they are a fairy young press figuring their way into the world—so please help it exist and get read--as in, if the reading of CIRCUITS sounds like it interests you, please order a copy off the Corrupt website and perhaps even order one for a friend! I will be in Paris mediating an encounter between poets Marilyn Hacker and Alfred Corn at the University of Paris on March 1st and there will be copies on sale at that event if you want to pick one up in person while listening to two other poets talk about their exciting new works! For now--THANK YOU for your interest in Circuits and to Marthe Reed for her invite to participate in The Next Big Thing!
My tagged writers for next Wednesday are:  (and click on their names to visit their blogs!)
Travis Cebula
Rachel Blau DuPlessis (but whose post will appear on Jenn McCreary's blog next Wednesday)
Lars Palm
Sarah Lariviere
Lisa Pasold