Transmissibility & Cultural Transfer: Dimensions of Translation in the Humanities 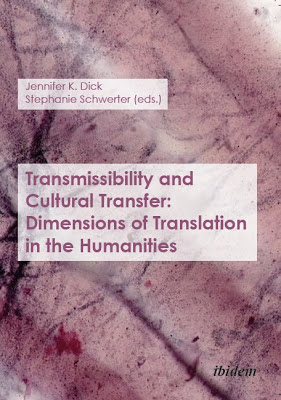 THE STORY OF OUR TWO FORTHCOMING BOOKS.... starting with this one!:
Stephanie Schwerter and I embarked upon the near-impossible a few years ago in May 2010 when we threw together a conference on translation in the social sciences with only a shoestring budget (see the blog from this event: http://traductiontransmissibilite.blogspot.fr/). We in fact were helped invaluably by funding from the EHESS & the MSH of Paris as well as unexpected last minute support thanks to the American Embassy in Paris' Culture and Education Office--which allowed both young and experienced American scholars come and speak at our event. It was a tornado of a conference, with double-barrel seances meaning we could--hélas--not catch everything at once. It was a conference full of bright ideas and dynamic speakers (again, see our blog for full details on all of those who were present, and to read abstracts of their talk) as well as a great sliver of authors and literary translators from Canada, Luxembourg, France, the USA, Lebanon and Argentina who not only spoke but also gave a post-conference reading for IVY Writers Paris: http://ivywritersparis.blogspot.fr/2010/05/transmissibility-lectures-le-12-mai.html for full details.

Steph and I were like waterlogged cats afterwards, thrilled with our encounters with so many scholars from such a vast array of areas, enlightened, glowing with all they had spoken about an made us aware of.

We soon began the long, slow climb towards publication--and I will announce in Spring the 2013 edition in French of a massive tome which has resulted from this conference, and which is forthcoming with the MSH of Paris. But what about the speakers and authors in English? We had in fact been contacted by a UK magazine requesting we supply them with selected works in English resulting from this conference for a special edition. So we got everyone to send in their exciting work and expected a series of articles to appear shortly thereafter in the UK. The magazine editor responded with great zest confirming that he had also adored the works presented and wished to publish them all... but time passed and no further word appeared. It came to that point where a query must be sent off, like a bottled message tossed out to see. And it was with distress that we learned that there had been one of those passing of the bars, changing of the guard, and the editor had headed off on some political self-exploration project in journalism far from the pile of exciting, glowing articles he had accepted. What to do?

Stephanie--being German--suggested we revamp the project and revise how the works came together and make a real book on the topic. We went through a process of reading, selection, editing, organizing, including requesting specific developments and changes to the texts that had been sent off for the magazine, updating the research and adding dialogue between the reflections presented to us. In the end, Stephanie and I settled on a tightly selected set of essays making up a volume in two parts--a small selection of 4 specific case studies whose reflections far exceeded their particularities as cases (thus rendering them perfect for the edition) preceded by a first half of the book on theoretical and applied translation theories specific to the social sciences. We presented the project to Ibidem-Verlag in Germany and found that the collection interested them. Of course, the publication did not then POOF appear overnight--it has been a long haul of editing, corrections, alterations, revisions. Perfecting, we hope! And now... the book is on the threshold of the stage, about to enter. Yes, we are thrilled to announce that it should be out this winter!

The authors of the chapters of this book--Jean-René Ladmiral, Peter Caws to start off with (and see below for the full table of contents) address areas in the humanities such as philosophy and sociology; As the reader progresses through this book, the chapters speak to one another and the reflections therein extend into the political and linguistic ramifications of what these authors have to say about culture, language and thought--about our need to question the origin of many of the ideas we take for granted, these ideas we treat as if they've emerged in an English mind, with Anglophone cultural and national references--which is so far from the truth. Where to begin reconsidering the way we treat so many well-known translated books as if they are written in our native tongue? And why even do that? This book will certainly provide many ways of looking at the answers to these questions, and many many more.

To get a peek at what is inside, read our blurb on the IBIDEM-Verlag site at: http://www.ibidemverlag.de/Publisher-s-List/Social-Sciences/Transmissibility-and-Cultural-Transfer--Dimensions-of-Translation-in-the-Humanities.html Or just get a sense of the volume from the Table of Contents below:

Part I. Theoretical Reflections on the Uniqueness of Translation in the Humanities

Peter Caws: How Many Languages how Many Translations?

Thibaut Rioufreyt: The Role of Actors in the International Circulation of Ideas

Salah Basalamah: Social Translations: Challenges in the Conflict of Representations

Henry Leperlier: Translation and Distortion of Linguistic Identities in Sinophone Cinema: Diverging Images of the “Other”