A few weeks have passed but the sounds of Montpellier, the quiet of the night, the cobalt lighting on the arcades, all that is already fading into a past. But here is a glimpse back at my first day in the heavenly south--full of quirky moments and captured in a few pics and personal ramblings below...

On the road--the LOVE of trains. The purrrrrr of the TGV, that occasional odd jolt and screech. Towns whizz by, as the landscape changes--rising and falling against the windows. Weather, too, in a single day's ride might go through as many moods as I, enclosed in the comfort of knowing I'm sealed away from other responsabilities, can only focus work-wise and what is there, along for the ride. For this Mulhouse - Montpellier trek I had the proofs for my new book, Circuits, (coming out soon from Corrupt press).: 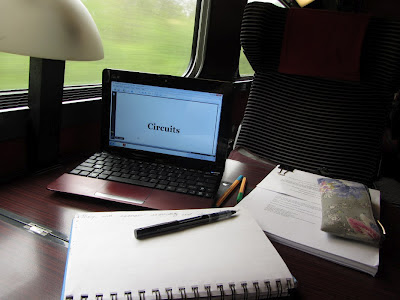 Arriving in Montpellier at night, fairly late, I saw little besides the tram and the spiderweb of side-streets angling towards the gorgeous Hôtel des Arceaux where I stayed. In the morning I got up, had a lovely breakfast (with the most amazing mini-POT of really dense, rich coffee and hot milk), then I began to wander. What can I say, I had big plans--walk in one direction and see what was there!

The blues of being on holiday alone engulfed me. It seemed the overwhite sky, the grey of the stone and trees not yet fully in bud echoed that unformed interrior me.: 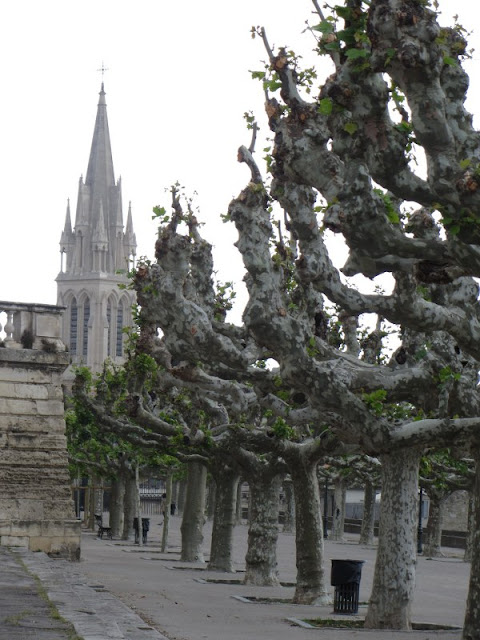 The tree becomes the fibers and veins of the body, a circulatory system. Some lines, almost translucent, faded, wait for their purpose: to be filled again, grow dark and robust, perhaps burst into bud. I stood before them, my eye unable to trace out the pathways among vein-branches which were entirely too complex to visually comprehend. The eye--seeing them as a whole--trusts in their connectivity. They know the way so that our gaze does not have to locate it.

The entire weight of leaves would one day be upheld by the veiny branch-structure in these goaches, just as the body survives because of the tiny capillaries, veins, fibers, tendons that hold up the mass of being. The mass and the netting below it. How to make itself into surfaces and hide its force behind them?

I wandered on, through the museum, on occasion listening in on a group visit or watching art students sketch en masse an apple or a portrait or a building. I admired the ruins of a mosque in snow in Laurens' gorgeous painting "la mosquée bleue, à Tauruis en Perse" (Salon de 1872). A place of path and passage, returning to the earth while above the sky was its cerrulean blue dome.

Wandering away from the framed figures of nature and back out into the world of real nature, I stumbled upon a wonderfully ridiculous street art performance: 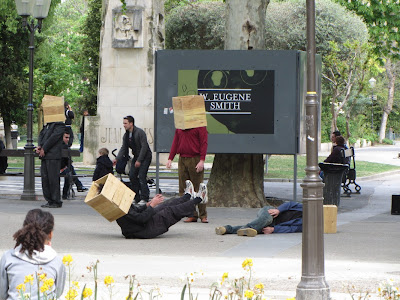 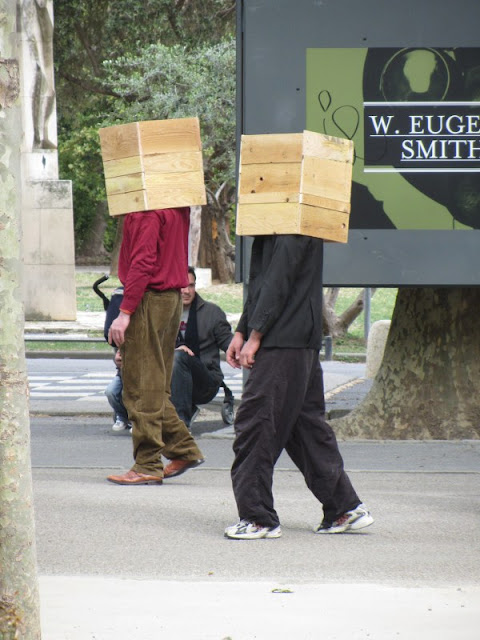 I hung around and watched them for awhile, boxed heads, startled public, a bit of improv between dance and theater. I then caught a film and on the way home to the hotel stopped into a lovely restaurant for dinner opposite the Hotel du Palais (that being behind the Palais du Justice).

KINETICS ?
I was thinking about movement, kinetic energy, passages. How some poeple just pick up a bag and hit the road. Some find themselves alone with a bag along a road. Some people fall asleep and wake up along unfamiliar roads. There, in the restaurant, the tiny pedestrian road outside was small and quiet. The Hotel du Palais sat on one side and the sleepy restaurant and its still-lit terasse sat on the other. A man read his newspaper in the terrasse, alone. (one is always reminded of Hemingway at such moments--of A Clean, Well-Lighted Place). It was too cold for the terrasse but he stayed anyway, read his paper, drank his coffee.

After, he folded the paper neatly, set it atop the table, stood, pulled his jacket back over his shoulders, buttoned up, picked up the paper again. There was a bright light over the hotel door and he glanced at the Hotel's doorway and sign. An XVIII century building--Parisien in style but with only 3 floors above the rez-de-chausée--long windows, thin balconys and tall blue-grey shutters for each window. They were all dark, shutters still open. Vacant, empty, waiting.

A car drove past and three pedestrians strolled by. I looked away as the waitres brought me my dinner and set the plate down in front of me. There were a few couples and a trio in the restaurant. Their voices were gurgling water as they talked in French, English and Italian. I looked back out to see that the lights in the hotel lobby, now lit, showed no one at their post, waiting for clients, returnees, an event.

The man and his paper were gone. His table had 2 pots of water, an empty espresso cup and saucer, a bright orange napkin, a knife, an empty water glass, a candle and a small plant in an alumninum pot on it. The green of the little plant seemed to lean out over the aluminum pot's edges towards the water pitchers and candle-flame. His table and two others were softly lit by the orange-yellow light of a bulb hung from a big tree nearby. The rest of the terrasse had been and still was in shadow, abandoned.

It was too cold tonight for a drink on the terrasse, but the old man alone with his newspaper had not seemed to mind. Soft music began to filter out of a speaker someplace. Old jazz. From the turn of another century. As I finished my dinner, a few other tables inside were still occupied, but only a few. The waitors and manager buzzed about busily, regardless... 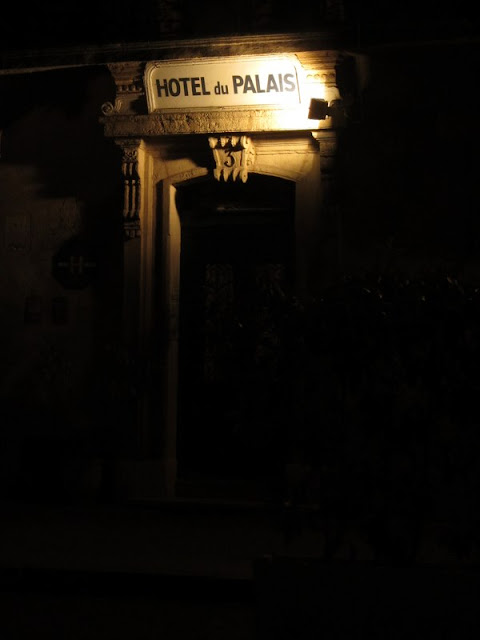 I stroll back to my Hotel des Arceaux and take a pic from my balcony of the blue-lit arcades and the sleepy street. I seal myself in--closing the shutters--to sleep fitfully. 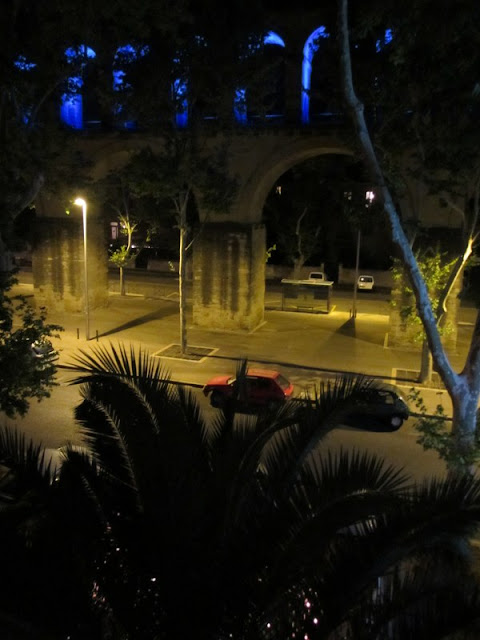 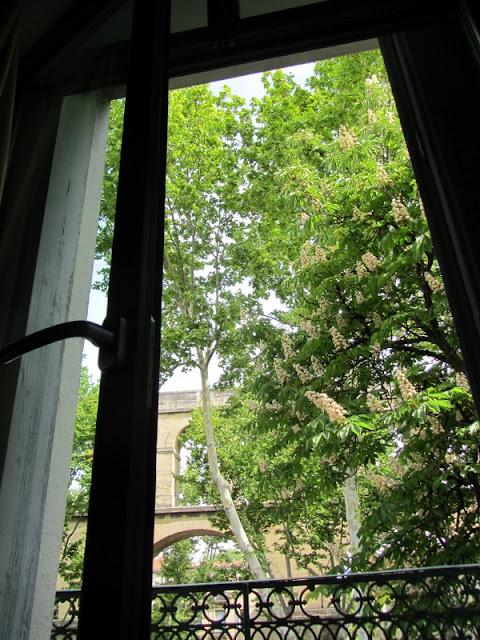 view from my window the next morning...