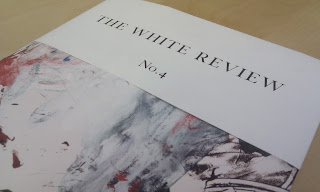 I've had the beautiful pleasure of receving some amazing books of late: including THE WHITE REVIEW issue 4, the French art and literature review put out in Bensaçon by Montagne Froide called MOBILE album / international (issues 1 and 2!), the newest and very exciting book by Matthew Cooperman, STILL (counterpath press), and one of the waylaid but finally drifted-in-off-of-the-bookmaker's-table Dusie Kollectiv 5 chaps--Moonraker by Vincent Zompa.

For anyone who like me is coming late to the realization that The White Review is out there publishing a gorgeous lit mag but which is also an object, this is the time to get a copy. In issue 4, the marbled paper of Venitian fame lines the inner cover which has an outer sheath poster with a stunning image which has been smartly wrapped round the review--the outer poster painting image is by Landon Metz. There is also a poster insert by Gabrielle Beveridge. What I think I am trying to convey by mentioning this is that this art and lit review drops hints of itself all over its reader's life--"aesthetics matter", "making and the object link to the wor(l)d", "come on in, don't just slip me onto a shelf" it cries out. Once opened, the array of writings from creative work to critical reaction and reflection have been as attentively selected as the art work which led me in the door. 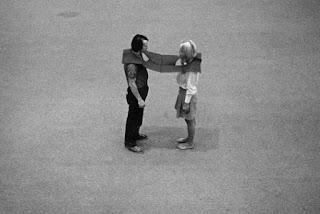 The French & English art-lit review MOBILE album/international is no less lovely in ways, though it has a more classic art review look--slicker paper for the first 2/3rds and the clean edges to border all of the images contained within. The two issues I was so kindly given by the editors, including Michel Collet who will be part of the Lex-ICON conference here in Mulhouse in June, are on themes: 1) "in between" and 2) "on translation". The third issue I have heard may soon enter our universe--and it sounds like an exciting collection. 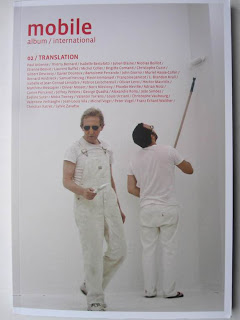 Issue two announces that "Mobile is a French-American bilingual magazine, where a part of creation meets a part of reflection." on the Presses du réel site: http://www.lespressesdureel.com/EN/ouvrage.php?id=2319&menu= which details this particular issue. Some of my personal favorites from issue two include the wonderfully zany inspire-me to be wild images of the Franz Ehrard Walther retrospective "Werken 1958-1968" (pp118-121) including images not unlike this b&w sample of his I located online. There is something elastic in his world, both covered over and extending to contact. I am all for the play, and the connection. And I like the geometry of the fabric's movements as captured in thes photos. Another fave? The double-page color photo, Ludovic Zeller (pp56-57) entitled simply "Landes (France)" as part of the Olivier Leroi interview Zorro Noir / Zorro Blanc which follows it. Many other exciting works to read and look at in this gorgeous Mobile of images and texts.

As for Matthew Cooperman's Still: Of the Earth as the Ark which Does Not Move, I adored Gillian Conolly's assessment of it on the Counterpath Press blog. http://counterpathpress.org/still where she writes "“It’s as if, [....] in our still lives, in the still shots of cultural, historical and individual atomized memory, Matthew Cooperman is holding a Geiger counter, a microphone, a mixing bowl and a spatula, defying his own lines, [...]" Isn't it brilliant to 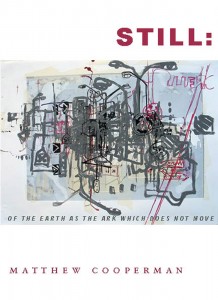 think of an author defying his own lines? But more than that, on the black backgrounded, white-typo pages with lines by authors such as Hart Crane, Hesiod or Harriet Tubman (anyone seeing an H theme in there?) I admired the way the text seemed to be struggling to remind us of its own familiarity while Cooperman had blackened out / dropped certain letters, even words in certain quotes. What is there, where are the gaps leading, are these crumbs in a trailed following? Still. If we move, might we set another vowel loose, lose it? Or must we move, quickly stack everything onto the ark "which does not move" as his title says, in hopes of storing it. Or, are these parts of the phrases which have jostled loose from that storage ark, to come back? This is a book that invites thought. I have not even begun knowing how to take in the poems. For now, they are taking me in, and I am too within the experience to yet "review" or comment on it. Aside, of course, saying--you should read it too!


Finally, the lovely handmade chap, Moonraker, by Vincent Zomba. The electronic version is at:  http://www.dusie.org/ZOMPA%20Moonraker.pdf so you, too, can enjoy the poems. But my copy of the print/handmade book version has this great RED on the cover where the yellow image appears on the online version. I like my red one, somehow making me think of cartoon exclamations. The texts? Wild rethinking of how one can explore a single noun take place in this little collection, for example: "skin". Not the literal simple outer covering of us, but something of connected-disconnectives on a larger level, as in the 3rd version of the "title poem" (all but 1 poem in the chap are titled :MOONRAKER". In this version, the poem begins:
And then the skin phone rang

and then the skin phone coaxed
to me or through me

Of wafting of solitude of sorrow

I pick up a stick and turn
it into a telephone
[...]
The poem here begins with an almost hardness, a slick movement, an unusual combo of skin and phone, but then there is the O of "Of" which comes and repeats as if in echo to the gentle "coaxed" as if its response, the of, of, of with the wavy rhythm of "wafting" "solitude" "sorrow" are like little wavelets of sound lapping up against the reader's ear before the reader reaches "of saying". What is being said? A passage. A becoming and disintegrating. There are the elements of everyday life that pepper these poems (as in nouns of place, flowers, trees, household objects, things), and the almost-familiar, (as in the delightfully unexpected: "the mules who bite the earth/and chew all night around me" or the normal slippers that suddenly find themselves making an odd noise, as in ""I brought you the buzzing slippers") and then there is something odd (as in "Stepped out of the wall / but couldn't stop yourself"), or more than that, something uncanny and threatening (as in "blue sanitarium flames" or "one child brazenly eating our leg"). And what lies between? The expression, or the possibility of it--of saying, writing "in our language of knots" as he says a few pages later. This possibility of expression, of reaching out of the mind, the mire of dream, to act in the tangible world, and thus, as Zompa ends another poem, it is not just that "I am positioned on a wind. I position a wind". 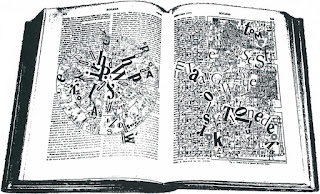 Well, those are my 2bits on the lovely books I have so graciously received of late. THANK YOU everyone. And more soon. Just in case anyone is interested--as you may have noticed, I have been adoring the discovery of so many fun visual text works as part of the Lex-ICON project http://lex-icon21.blogspot.fr/ --(the image at the left is from Andrew Topel's Book of Spells. Keep an eye on Lex-ICON for another of his text-images Friday March 30th when that gets published) and I hope everyone will keep checking that out during our 60 days 60 posts pre-conference extravaganza project. It has been a LOT of fun to be the poster for the last 10 days but after the next 2 the bar is passed off to Claire McKeown! I look forward to seeing the next batch of submissions as they light up my screen.

Until then, tis off to PARIS again for--YEP--IVY WRITERS PARIS with Dusie Press publisher and author Susana Gardner, Sean Cole of NPR radio fame but who will be in Paris for the first time ever reading his new poetry, and to accompany them is Gilles Wienzaepflen, whose recent collection of poems from le clou dans le fer is one of the most delicate treasures I had the pleasure of encountering last fall. It will be a splendid night à Paris, so hopefully I will see some of you there? For more, see the newly revamped IVY blog at http://ivywritersparis.blogspot.fr/ Feel free also to join our FB group and respond to our FB event invite for Tues the 3rd of April's reading!
Posted by Jennifer K Dick at 6:46 PM