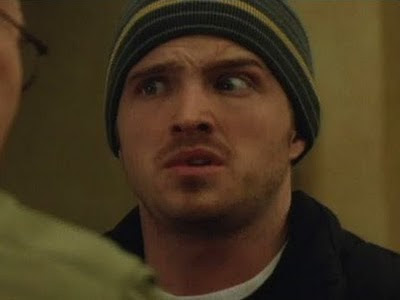 Last night's episode of Breaking Bad (Season 3, episode 12) was the one I feel I have been waiting for for a little while now: an episode which makes me wish I could see what is going to happen next week right now--the waiting is over and the consequences are at hand!
For this season has been simmering for a few episodes. With its usual brilliant dialogue and bizarre psychological explorations, it has kept us hooked even though we have been in a kind of holding pattern : Jesse Pinkman (played by Aaron Paul) has been on observation. Hank (actor Dean Norris) has been in the hospital. There have been various spins around the house so that we think perhaps Walt (played by Bryon Cranston) will be returning home at some point, or to the hospital with more cancer. So the plot's been cooking at a nice, mesmerizing boil, threatening to slip over the rim then pulling back, again and again. But under the surface, the pieces have been set in place for us viewers to see this explosive confrontation coming. However, unlike what we may have suspected a few episodes back, it is not Walt's instability that throws everything off-kilter, but Jesse's, as he comes to a few realizations and seeks justice.
So this was it--the moment of no turning back, of Jesse finally setting off on his course of no 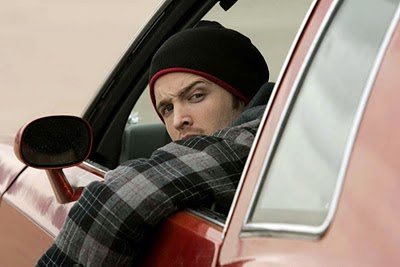 return, of not getting away, of no more u-turns, of taking his no-holds-barred revenge regardless of the cost. Especially following the "pep talk" of our favorite hit /cover up/solution-for-any-bad-situation man, Mike (played by Jonathan Banks), it seemed inevitable, in the nature of Jesse, to act out. So we were getting the brilliant signals oozing out of every frame that this was it, that Jesse was going to either get himself killed or kicked off the ranch. Walt sees it coming, does everything in his power to curb the active anger--from flat out telling Jesse murder is a bad idea (duh), to trying to get Jesse arrested and held in jail, to forcing Jesse into negotiations with his opponents.
And it seems like it might hold, for just a second, and then it is over.
The moment where Jesse slips up, goes back to zero on the 12-step count, was bound to lose it all, is here. But we can already see something is racing towards him, has dashed out of the tranquil, safe suburban family dinner option and is whizzing through space like the heroic antihero that he is--all rationality in a way, all past rationality, to save the day.

Walt remains the superman figure that Pinkman depends on without realizing it, and it is Walt we are worried about and concerned for when he leaves the viewer panting, ready to high tail it for the hills at this episode's ending exclamation: "Run!". But like any comic book hero left under a massive slab of Kryptonite, we now ask the requisite questions (as comically sure of the response yet thrilled to play out our curious role): Will our hero escape? Will this be his untimely devise--an unselfish act of self-sacrifice? Or will our villains get what they desire?

The wonder of Breaking Bad is that with its fabulous moments of subtle humor (ie: Skyler (actice Ann Gunn) reading the Wikepedia entry on Money Laundering, or Marie's proud, sly smile as she wheels Hank towards the hospital exit, knowing on what grounds she has succeeded in forcing him to leave (played by actice Betsy Brandt), it manages to grip us and jerk us around and surprise us even in actions that are somewhat predictable. We knew Walt would come, but did not guess at the graphic moment of his action.

Gritty, funny, dramatic, horrifying--this mixture is the very thing that keeps me coming back for more of Breaking Bad. An A+ episode by writers who always have an unexpected ace up their sleeve. (Photos courtesy of AMC, buddyTV.com and MSN)
Posted by Jennifer K Dick at 3:24 PM

I concur, Breaking Bad is a top show. The ending of this episode overwhelms anything I've seen before.