Talking about the pages we love...

Sometimes it seems that the words of writers that have com 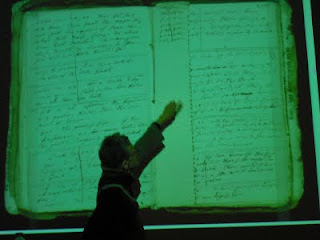 e before us LOOM. There is something larger than life, untouchable about certain texts or their authors. For me, this applies to Dante, about whom I cannot write critical work because I feel overshadowed by the accomplishment of the original, daunted, humbled. For others, it is the work of Shakespeare, Joyce, Stein, Dickinson, Whitman, Stevens, Mallarmé, Baudelaire, Homer, Ovid, Olson--and the list could go on and on--which they are unable to write about.

Thinking of this reminds me of a moment at Mount Holyoke College where I was studying the poetry of Zinnaida Gippius, battling with it. I wrestled with all of the mysteries of it which I felt unable to grapple, to peel open, to see into even enough to write the term paper I was struggling with. I fell into a deep sleep and there she was, in a smokey haze, wearing a tux, leaning back on a wooden barstool, peering at me--as if to say, "Go ahead, ask" And as I shrieked "I just don't understand you!" over and over, one of my hallmates rushed into my room and shook me awake saying I had been yelling that aloud. Who knows, perhaps I did manage in the end to write about the enticing world of Gippius' poems for Joseph Brodsky to scoff at my young reflections on, but more importantly, for me, this was the first in a long series of strangely delightful battles. The work did not deliver itself openly to me. It had to be pried out, re-read, re-examined, questioned, interrogated, slept with.

That reminds me of Harryette Mullen's fabulous title Sleeping With the Dictionary. Doesn't every author, in a way, go to bed with one ear on the massive tome of their thesaurus, their dictionary, their real or imagined OED? As Susan Howe and Dominique Fourcade talked about Emily Dickinson's fascicles in Paris this weekend, they also spoke of her Dictionary. We have an intimate relationship with words as authors, their corporeal being, our desire to give them more physical stature than perhaps others do. As in the photos of Howe here, where it seems that she is reaching not up at a screen to point something out, but back through time to an enlarged version of Johnathan Edwards' manuscripts. She is reaching towards Edwards' time-tattered, world-worn scribbles, into the textured spaces of the paper itself, past projected powerpoint image, colored light, past now, back to the center of some space between two handwritten letters. Can we touch the other, there, between the print?

Is that not, in a way, what reading is about somehow? Contact. Word and space and ourselves not fixed in time but carried through it, forward and back, infinite?

It sometimes feels as if, to me, we can touch the other, the author, there, between their scribbled syllables. Consonant. Vowel. Dashed-off punctuation. We spend so much time reading the words that eventually they blurr, we drift off with them, they carry us out over a seascape, dreamscape, closer and farther to them. Things as we study them, both as scholars and as authors, peel out, open, as if to core, text, to stand before its center, to listen to it so closely that our hearing seems augmented and all sound comes in and then, where there was only confusion, only incapacity to reach the text, there is suddenly a moment, as of a chill rising up our spine, when it seems the entire poem, book, author gives itself to us. Sure, this is illusive. It is temporary, perhaps illusion. But it is like the phrase by Paul Valéry selected to accompany Saturday's talk by Howe and Fourcade at Le Petit Palais: "Une oeuvre d'art devrait toujours nous apprendre que nous n'avions pas vu ce que nous voyons." 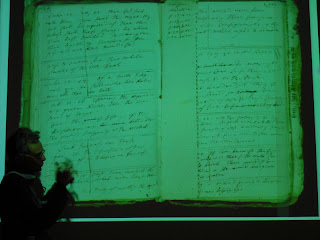 I pull out and peruse my notes from the various talks I heard Friday at l'institut du Charles V, caught by the phrases I jotted down: "The flux of drawings challenging the fixity of text" (Antoine Cazé, from 'Susan Howe: TransParencies')"Disruptive energies of this radicalism" and "textual brokenness becomes a motif" (Will Montgomery, 'Susan Howe's Later Lyric'), "Move in closer to the enclosure of words...boundaries/known reference points begin to disappear." and "Explode the book into a space." (Redell Olsen, 'Book parks: scripted enclosures and Susan Howe's spatial poetics')

I left feeling that the material-ness, the material of, the materialism of physical nature of the world--and my, our, these selves--is in flux. The body that is me at one moment is solid. Granite. And then there is a breeze passing through a muslin shift. What of the me, us, solid, remains in that second instant? This, too, is reading--the passing from what I know, see, hear, feel at this moment of reading, to the moment after, when the knowing, seeing, hearing, feeling has shifted. I let go, I point towards. I enter the flow of the gaps which carry me, buoyant, to and fro in these, my languages.

We readers/writers are perhaps in the destruction/construction of history. At least this is something I feel I have learned after many years reading and studying the works of Susan Howe, Myung Mi Kim, Anne-Marie Albiach and Stéphane Mallarmé. I came here for him, and as I worked at the end of my PhD, I--like these accidentally-intriguing pictures I took of Howe--felt I was reaching towards those manuscript pages of Un coup de Dès propped on my desk to an explanation for what connected us as much as to understand the work itself. I was reaching towards the unnammable, unknowable first instant, the second before the sound became, the poem spoke.
But I suppose I should leave off here with some of the phrases from Saturday's talk. Perhaps in a language you speak, perhaps in a language which remains a series of glyphs and signs to be sounded out towards meaning: from the programme of "Autour d'Emily Dickinson. Avec Susan Howe et Dominique Fourcade":
"Les artistes ne perçoivent pas immédiatement toutes les relations au sein d'une oeuvre: ils les sentent.
Là où une pensée se surprendrait au moment de voir.
Là où une pensée s'entendrait voir.
Ces fragments et brouillons à la limite du dessin sont suggestifs, nullement statiques.
Sensation qui se replie sur soi pour rester à sa propre hauteur."
(programme du Petit Palais, le 31 Octobre 2009)
Posted by Jennifer K Dick at 4:44 PM

Email ThisBlogThis!Share to TwitterShare to FacebookShare to Pinterest
Labels: Academic Conferences, Art and Language, Musings on Reading, Musings on Writing

this post is so beautiful and intimate that i almost feel shy, like i got caught in the library trying to have sex with a book. that's the other thing, i think: books are like people in that you don't really know what can of worms will be opened in the field of intimacy until you actually sleep with it/him/her/et al. and then...watch out! the syntax--or lack thereof-- might cause permanent changes in your body tissue. and now i'm going to take a deep and scintillating nap with your post-- so much love....s

Hey Grace & Sara--Such lovely comments from you! Thanks so much for them, and for reading my post. Also, Sara, I adore what you say about the dangers of reading causing permanent changes in your body tissue! The things we get close to, the things that undo us, that which forms into us. Kisses, Jen