"NEXT!!!!!" --That is what I would have yelled out till my lungs turned blue, and with a roll of my eyes, had The Vampire Diaries, the new CWtv show vampire fans have been awaiting with baited breath, been someone auditioning for a key part in a new play. In Vampire Diaries episode one, a Gossip-girls vacuity and prettiness are paired with even worse acting. Sure, they're eyecandy 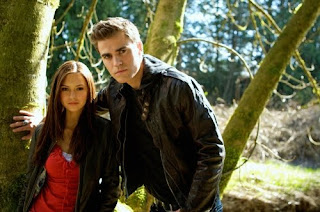 when sitting still, but their bodies have a stiffness and their faces an expressionlessness that's without mystery or any sensuality.
This is perhaps not entirely their fault, as I get the sense that those behind the camera are leading this frenzied bag of badness with a tight grip. The bizarre forced camera cuts are almost a comic echo of the jerky movement between storyscenes. Unlike Trueblood's masterfull baiting of the viewer, this program establishes all the bases for what is to come, leaving us little to chase after or think about on our own. And the journal fluff, especially that oh so reading in tandem? I might suppose this show is striving to look like some after school special for vampires who will behave! Finally, as if to cover up the bad acting, characters, and narrative choices, a dominating soundtrack deafened this pilot episode. Was there a behind-the-scenes debate going on about whether the idea was to make a series of linked rock videos or a TV show? 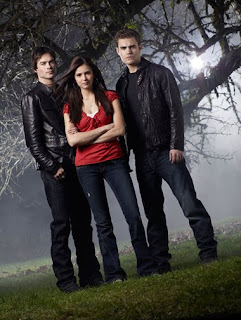 And I write this review when I am the ideal candidate for loving this program: A vampire junkie since reading Bram Stoker way back when in high school. A Buffy adorator--and though I should not admit this, I even own the entire, cheesier, Angel series: fun to rewatch on lonely winter nights. I read all the Stephanie Meyer books (despite the terrible editing job on such a bestseller) before seeing Twilight on opening day here in Paris (with every teen out of school that afternoon!). But when it comes to TV vampire drama, even the quickly cut from production Moonlight had more excitement.
In short, this first episode of Vampire Diaries left me sadly disappointed. What's more, many other reviews strike me as peculiarly undemanding of the show, and have startled me with their flattery. Don't be fooled, even if "everyone" feels like they should say they like this 9021-OH-Vamp show, the hype is goning to fade fast. After all, make-up runs in ugly streaks under heat like the one that will be needed to keep up a facade of greatness when there is no substance behind the curtain.

On a positive point, this new show's vamp teeth choice. Nice special effect work there! Solid, animal, natural looking fangs one could expect to bite deeply into our awaiting necks. Alas, my neck is exposed but their the fangs just aren't able to get close enough for me to get my heart flip-flopping as I await next week. If I am out and miss episide two, well, tant pis.
Posted by Jennifer K Dick at 5:32 PM