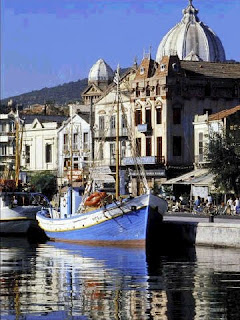 I have officially left the peace and quite of the beachy island beachfront life of Skala Eressos. As the bus rumbled and curved over the mountainous ranges of Lesbos yesterday winding its way from the arid heights near where I have just spent almost a month through greener, pine and olive-filled valleys, past red-tile-roofed monasteries and villages, to the suddenly bustling busy Mitilini, I did do a little bit of regretting the post-skinny dipping in the Agean celebratory tequila shots of the night before! But it had felt splendid to toast encounters and departures with a group of women from Norway, Canada, England, after having a plunge in the dark night Agean, the water exciting and, though cool, not too cold.

It was "the last swim" for me there, the end of a season. And then in the morning as if to signal 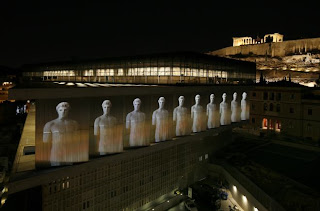 this leaving, I spotted the first clouds I had seen in nearly a month! White, fluffy, billowing clouds as if plucked from a child's storybook.

On the bus, I slept and woke off and on, taking pictures now and again of the daring drop-offs round us, the valleys and peaks of the island, its varied nature. Once in Mitilini (pictured above left), I stashed my suitcase at the bus station on a shelf like everyone else, crossing my fingers that it would be there when I returned later in the day. Then I made a beeline for the cafe where I had first had a cafe frappe in Mitilini when I had arrived at dawn 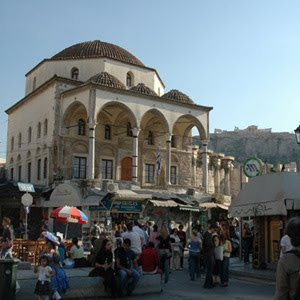 the 5th of August.

The little boat with the same rugged, drowsy fisherman was docked in front of the table I had sat at, though the harbor was bustling at noontime, the cafe filled with the click and huff of backgammon pieces and players. On the terasse where I'd sat and thus sat again, the fake lawn under the tables had been sprayed down to keep it cool. Large, cobalt blue parasols protected me from the sun as I journalled and then looked up info on the history of Mitilini--and also the distillation process for ouzo! After my little pause, I arced round the waterfront then weaved back and forth among the little backstreets behind the port, looking in shops and the appealing bakeries.

The town smelled like sea and anis, with a hint of sweet almond oil, too, from their cookies. I stopped off at a few churches but all were sealed shut, then bought a bottle of ouzo for Paris and some oregano from an old man sitting on a crate outside his spice and spirits shop. The clothing and other stores were shutting up for siesta, but I continued to meander the closed shopfronts before stopping off for another cafe then wending my way back, fingers crossed, to my bag. 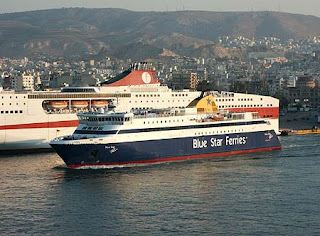 An old, red-eyed dog was asleep in the entrance of the bus station. I was thrilled to find my suitcase still there, as many others had taken off on their voyages either cross-island or islands. I asked the dog, some sort of irish setter and something else mix, in English if I could get by and he looked dully up at me but seemed to understand, seeing my bag, that this was one of those moments--and so he hauled himself ever-so-slowly and reluctantly off the cool floor and let me pass. I grabbed a gyros en route to the ferry, also looking over the port's edges into the water to spot all the little and medium sized fish who were often hiding along shore or under boats. I passed the Mitilini ouzo museum distillery and the busy parking lot by the ferries to climb aboard my own ship in the late afternoon with many others.

Though I am much more comfortable boating than flying, I must admit that as our ferry headed out into the dark, rolling sea between Lesbos and Chios then onto Athens, I felt warry. After we passed the ruddy red coast of Turkey on one side and various small Greek iles on the other at sunset, we took on a last load of passengers at Chios and headed away from land into a black and powerful sea. The ferry decks were covered with sleeping bodies, those who had decided to camp out on the floor or had brought sleeping bags. The sea rolled us up and down, side to side a bit, so that I kept wanting to right the boat when it listed left! For many it seemed this rocking was 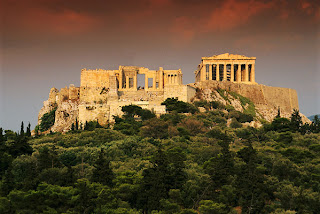 comfortable, a physical lullaby singing them into dreamland. For others like myself, the rolling dragged us outside again and again onto the gated metal deck for a look overboard, at the movement which seemed so close below and all round us. The moon was high and I spotted another well-lit ship not so far off from our own. Returning inside, a bit less antsy, I, too, fell asleep in my chair for a few hours, waking to feel the thudding crash of waves against hull around 1am then again at 2:30 but when we finally pulled close to Athens this morning at 6:30 the sea was flat as a pancake.

Now, about to head off to explore more of Athens, it still feels like the earth is rolling and roiling under me. I look a mess, and am unable to check into my room at the Golden Athens Hotel near Omonoia yet. But no matter, I figure, what I look like today! I have therefore dumped my bag off and am going to see revisit the Monastiraki quarter (pictured above left, second photo down), which is part of Athens old town, before returning to check in and shower before heading back out to see the exciting new Athens Archeological Museum (pictured at the top right), which opened in June of this year.
Posted by Jennifer K Dick at 10:46 PM