John Parker--may his life and writings be remembered! 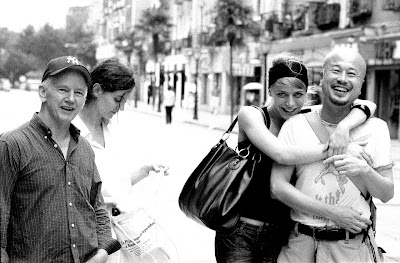 The sad news is that a wonderful writer, artist, spirit and friend has left this world this summer. John Parker passed away in Shanghai last week. I met John while he was completing his MFA at UMASS and while I was an undergraduate at MHC. I would often call him up in the middle of the night unable to contain myself to read him new poems, waking him from various stages of dreaming. He never complained! He was responsible for me meeting many other MFAers over at UMASS and for my taking, with Greg B, the graduate seminar on Hemingway offered by Donald Junkins. Unforgetable times in Amherst and South Hadley! Life was beautiful because John was in it. And here is a lovely photo by Greg Bachar where we see John at the left. Gorgeous, full-of-life picture! Info for those of you able to make the services is below. Read his poems, celebrate his life, feel the joy that was his in living!!! Some of his work appears in the bright blue issue of Upstairs at Duroc, in case any of you have those laying about he house and want to have a re-read of his prose poems in memoriam.
John‘s Funeral Service before cremation

All friends are welcomed to share memory of John, Poem reading to contribute to John. A PPT document which summary John’s life and work in Shanghai will be shared with every one. Small food and drink served.

Vienna Café will be screening two films to remember his numerous days spent in this little café. Pumping Iron, a film about body-building culture is a film that John always wanted to screen here but never had it realized. Behind the Heavy Wooden Door is a short film about stories happen at a Japanese bar in Shanghai. Starring John Parker and his friends, the film is set in one of John's favorite bars in Shanghai.
Posted by Jennifer K Dick at 4:25 AM

Email ThisBlogThis!Share to TwitterShare to FacebookShare to Pinterest
Labels: Personal

John Parker was my uncle... my sadness at his loss is great; more for not knowing him and how great he was, only memories from childhood. My sisters and I just spent the weekend in Cape Cod, celebrating him and sharing memories of him. I would love to know more. Thank you for sharing this.

Dear Nancy--Greg Bachar had sent onto me his text for the memorial in Cape Cod. We who knew John at various moments in his life were so very lucky. I would certainly be open to sharing more with you and also hearing anecdotes you recall of him from when you were young!!! If you want to send me an email with a phone number, even, we could speak about him a little--my email is on my profile, so you can contact me. I know that Greg is in the process of trying to bring John's writings together in hopes for a book, and I really also think it would be a great thing if that happened. Best to you. It is so nice to hear that so many family and friends of John are thinking of him this fall!!!

I was just reading John''s exquisite " Night Song At Da Nang" and then discovered here he had passed away in 2009. I adored John. He was my friend, my mentor, and one of the most beautiful souls I ever knew. My heart aches learning of his passing quite some time ago...