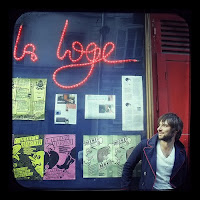 Paris Vacation: as I have yet to actually get out of the city, I am rather getting into it, enjoying its sites and scenes. Visits from friends, visiting friends, concerts and readings, as well as afternoons and evenings writing poems and articles at home.
In that order. But here, in reverse chronology--to start with the excitement of seeing a CONCERT for the first time in AGES! Loved discovering the space(s) of La Bellevilloise and, with Marielle Anselmo, went to see Kaluun + 4 other groups competing in a city-wide multi-concert affair (calld Clack! ). Discovered a group, writing their songs in English, but splendidly, who was the official JURY choice (and mine as well) for the night--You & You (Félix, the lead singer, is pictured at top, left). Perhaps not the most brilliant 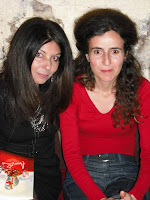 band name ever, but click on their name here to be transported to their MySpace site to hear some samples (they have 6 tracks up), perhaps watch some videos as well. These guys who formed their group in Feb 2008 were riveting, and a pleasant departure from the majority of French bands singing in English. As it is, you should check them out: YOU and YOU at Café de la Danse May 26th 2009 when they open for a group called Gush!!!
Preceding concert night, the IVY Reading for this month with a small, vacationtime audience, but all listeners totally tuned into the fabulous duo we had read: ADEENA KARASICK & GWENAELLE STUBBE (pictured at right). Both performers in their own ways, with word and sound play, or image and positioning of the voice on the other side. A few fun pics of the poets in action can be found at IVY's site, under the post for the event. Also, check out Adeena's video online (http://www.youtube.com/watch?v=I_m6CkdkbUY ) at Youtube: "I got a crush on Osama" 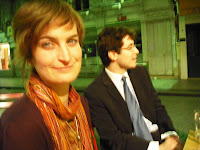 After the reading, ran into Jennifer Huxta (pictured at left with Frederic Benhaim looking so bank-serious!) and the crowd from her Live Poets reading (which was the same night as Ivy!). We sat on a terrasse on rue Montorgueil while the last of the sunny spring days this week began to spit and turn into the rainy cool muck we have had ever since. But it was pleasant to just have those first sunny days, to drink with everyone, to listen to the post-PhD stresslessness of it all! Pictured here: Elizabeth Spackman who was visiting from NYC; wine glass & pack of matches with spoon; Bart(?) with Carolyn Heinze in glasses behind him. 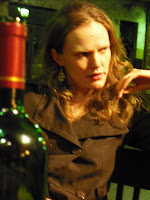 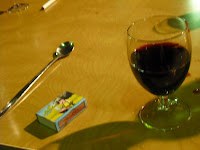 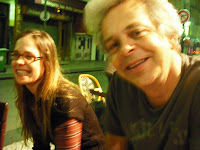 To end with: Three Pictures from my neighborhood: Bassin de la Villette at night. Walking with Elizabeth Spackman, catching up on her life in NYC and mine here, we enjoyed the array of lights on the bassin, some from Stalingrad, others closer to La Villette. 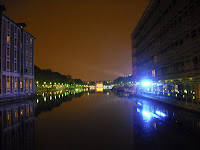 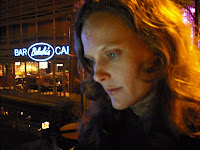 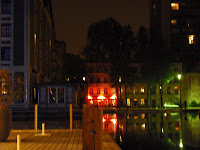