It is officially "vacation" week for many here in Paris. People are off skiing or, if lucky, sunning themselves in some Brazilian paradise. Me? I am catching up, finishing up, closing doors on projects and, as for teaching creative writing, my semester.

In fact, as the semester draws to a close for Promo 2006 at the Ecole Polytechnique, I realize I really enjoyed working on theatre for the first time with students. So thought I would mention their blog with my (often somewhat blurry!) pics of their plays being performed last week. 11 in all, so it was quite a packed afternoon! To see them, feel free to visit the Polywrites blog: http://polywrites.blogspot.com/ which also includes some fun texts from earlier this year and all last year, in case you are interested in perusing. 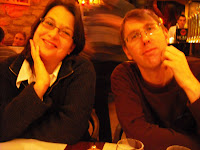 And if I have not been vacationing, I have had the luck of having others vacationing here. Diccon Maude (pictured with Marielle Anselmo where we had drinks near Beaubourg) came over from London and we ran round to some of the sites I don't visit often enough (Père Lachaise, stopping by Stein and Toklas' grave, which had been visited the week before by Michelle Naka Pierce and Chris Pusateri who were over reading for IVY Writers Paris, visiting the city and my students, and leaving me all inspired--see photos of them together here from an evening chez moi also with Lisa Pasold, Nicholas Manning(not pictured), & George Vance where we recorded filmage for a forthcoming interview-readings film to be up at The Continental Review this spring--as in, when I learn to edit it properly!) 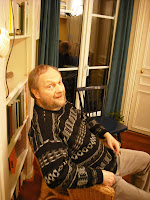 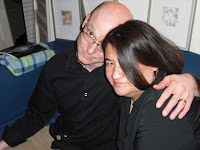 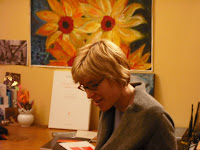 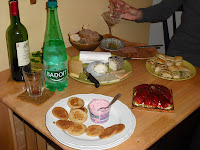 Much of what was discussed with M Naka Pierce and C Pusateri was the place for or absence of the quotidien in their--and others'--poetry. Issues of what kinds of "quotidiens" exist and where the self is came up as well. At their visit to Polytechnique they also talked at length about their creative processes and as they read together back and forth poem to poem some work out of Pusateri's Anon (Blazevox 2009) and Naka Pierce's Beloved Integer (PubLush/ Bootstrap Press 2007) I wrote the poem here, which also appears on Rewords, but I felt like including it here as well. It was great to write pulling words from their poems as they read, and for those of you who are constant reading-goers, this is a great way to find new poems! I am certain that for those who know Naka Pierce and Pusateri's work well, you will hear their vocabularies in here. Happy vacation(s), everyone....

facts missing memoir's aggregate slippage. names, or the heat in the evening bed ceiling snow vulnerable secret direction of you fading. lie. glass sleep. a picture yellowed as persistent film. think, closer to me, hearing an old, heavy voice. childlike breadth of scuffed knees, pick-up self recurring in time zone's return. fountains turn back rock canyon quarry's mouthless history. speechless documents graph you to you to close everyday content's failure to risk imprinting the written space printed, printing this unreeled distance. white breath, neck cramps, a city (India), house open to four seasons, direction a compass-character you pick up like a toy consequence. the otherness in/of the familiar. almost. as in the way this gap (space) (tooth) reaches.
Posted by Jennifer K Dick at 6:04 AM