The pleasures of poetry 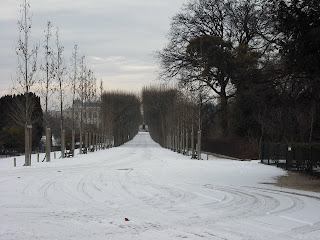 Good day: taught, lunched, gymed, translated 2 poems by Marie-Louise Chapelle into English, prepped, went to reading, dealt with reading location crisis (as in, found a new venue at the last minute while 30 people stood on a rainy street debating whether to go back home), introduced readers with Michelle Noteboom, listened to great poems by Chris Pusateri, Marie-Louise Chapelle & Michelle Naka Pierce (see IVY for details & links to their books & some online poems), listened to my wonderful students read translations into French of MNP and CP's works, read translations of MLC, dined & chatted with everyone after the reading, metroed home in a jubilant mood, and then heard that 12x12 (UofIA Press) is out and my parent's are soooooo impressed (always makes one feel great!). And so, how was your day???

Been thinking also for the past 2 non-blogging weeks about all those things I have not blogged about. About blogging, and journaling, and the gap between. But of course, also, about sharing in the pleasures of what is read. 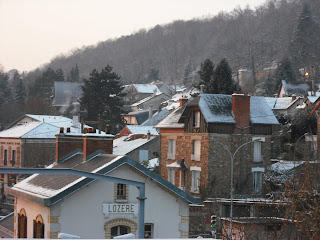 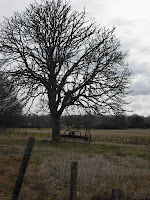 A second exciting book that came into my life this week was Andrew Zawacki's "Petals of Zero/Petals of One" (Talisman House, 2009). A gift from Andrew, I unsealed its envelope and carried the volume out into the world, the Paris streets, down into the dustball-filled wintery metro with me and re-read that great first poem in the volume "Georgia" and the word echoed and the hollow of the night on which it was composed seemed to come through time as if I were channelling Zawacki for a moment, scratching the words onto the paper, the delicate painful lines, the raucus ones, the jostling ones, the ones that said :
............"here is a city
............is the same city
............and I don't know this city Georgia
............and I don't know if I want to know
............what it is that anyone knows Georgia" 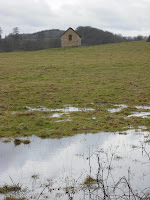 bumping along in the metro cars, my elbow and the elbows of others reading lines in a city I know and yet I don't know, Andrew, what it is about that poem that works so well, but it sort of feels the city and slithers through it, underbellying, resisting, tugging at then tossing off, urban collision and the quieter voice that, like Oppen's start of Of Being Numerous speaks of and to the many yet is the one, you in this case, and another, me in that case, speaker, listener, author, reader, meeting across the rhythms of those pages and recollections of hearing you read it a few years ago when it was still fresh and is still now just as new and alive as then, reaching me unexpectedly in a little yellow envelope from the states in a Georgia city you now live in. Thank you.

But I am also excited about some new discoveries, such as the book I'm ordering from Factory School by Erica Kaufman. Her first collection, Censory Impulse from such an exciting, innovative press, looks like it's one not to miss. Especially after I checked out her critical-reflective playful text intro to her guest editing stint: Queering Language: Editor's Statement from EOAGH mag. What can I say, it piqued my interest. And I liked her sample works from the collection, so... off to get my hands on that book!
Well, it is late and my words on words are getting tireder by the second while the wind outside has begun to rail against the night, a furious, gusty storm that Paris has been awaiting all evening and which is only pummelling the town now that the majority of its inhabitants have gone to sleep--as should I. Just a few images, then, to close off this posting. Pics from Normandie weekend with Kate Van Houten, dinners by the fire, & her sculpting. (FYI, the photos above are some I took on wintry days here in Paris, out at Lozère, a suburb of Paris where the Ecole Polytechnique is located, & on a walk in normandie with Kate--the fields.) 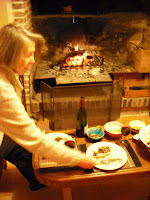 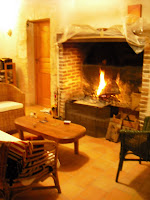 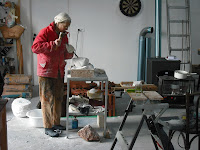