Flashmobbing & other kinds of civilized dissent

Yes, I flashmobbed the other day. It was fun. Sprinted out of the métro just in time, in fact. Ran into Antoine Cazé and Sophie Vasset in the elevator exiting the St Michel station and we only had a moment to dash over into the crowd which had gathered before the whistle blew and books came up in front of faces and mumblers mumbled and others orated and others seemed merely to stare into their pages. 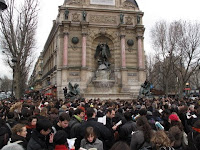 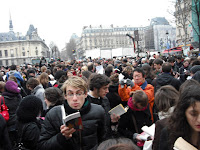 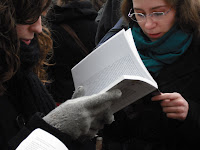 One older man (in center picture of the following trio) strode back and forth through the crowd reading as he went with a paper sign stuck to his back. Other people with cameras milled in and out of the group, their photoshutters clicking and humming and buzzing. I got a few jolts from those around me as they heard the English I read out (Oskar Pastior). I thought, why read in French? It is so unoriginal in that context! So I read in France a German poet translated into English by Americans. Fitting? Perhaps. 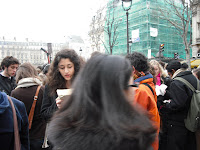 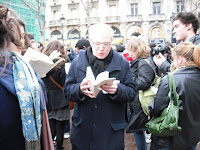 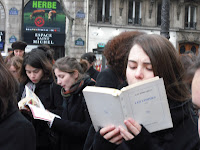 As we read, and after we stopped at the sound of the second whistle, a young man with a cardboard sign wandered round passing out flyers explaining why the universities were on strike. I, personally, am not on strike. My students sometimes come to class and then take off to meet over at the main EHESS building to discuss what the school is doing, but generally we have been plowing forward into our semester regardless of the political sparks flying round our heads. 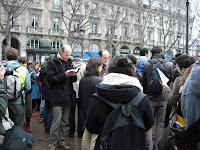 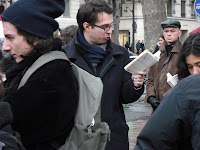 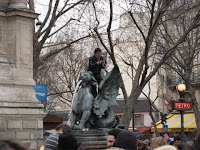 It was kind of lovely, this intense moment of words and pages and I felt the sadness of the demise of such beauty if the laws should go through and the focus on the humanities should be diminished as radically over the coming years as I feel it would based on the proposed changes. No surprise, but surprised all the same. 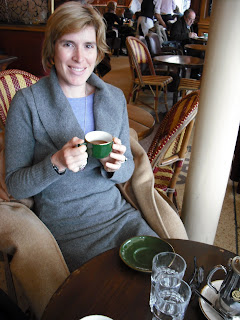 After, I found Lisa Pasold who I had failed to meet before the flashmobbing began. We went for tea and coffee in Panis café oppostite Notre Dame and life felt beyond civilized. A little dissent, a little photojournalism, a short stroll among tourists on rue de la Huchette and then tea in a glass-fronted café. Life is still good. 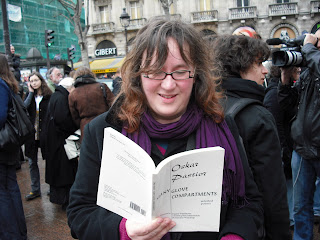 The photos here also include 2 from the glass-front of l'EHESS today, where the police had arrived early, standing alone, blocking off parking spaces, waiting already tense for the mass of announced university professors, students and researchers that were to gather at 3pm for yet another March through Paris. 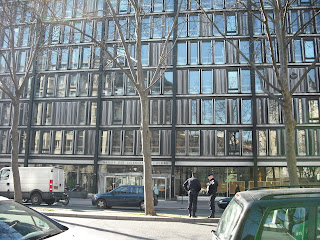 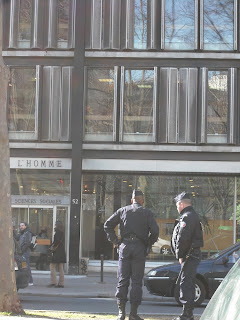 Over the past week, many forms of prostest have been emerging, from teachers merely holding classes off campus to workshops on poetry and politics or plays and films being made, reflected on and examined all under the guise of not studying. What is education, if not the realization of how many things we still need to reflect on? We peruse, discuss together, test out, examine, write, read, read, read... in a flash/mob!
Posted by Jennifer K Dick at 2:37 PM

I wish I could have gone to this! I was too sick that week to get out of bed.
You know Antoine and Sophie? I teach with them at Charles V!