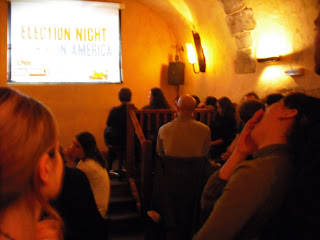 It was rolling towards 5am, then just past, as I taxied from The Highlander pub through the rain back up to Louis Blanc. I said "There are a lot of Americans awake in this city tonight". The cabby just nodded. He told me, when I asked, that he was Congolais as he switched his radio from some long-winded tale on the new documentary (translated into a gazillion languages) of Pope Jean Paul II to the French announcement of the election results in the USA. To both our surprise, according to CNN, they said, Obama was the new President. As I gave a quick yelp of joy, he was already on his cell babbling away in some language I didn't understand then, for my benefit, threw in in his heavily accented French a Yes, they've already announced it, it's him. I felt moved, as we drove up to my door, that even he and his friends were awaiting this news. Change is coming. Change is on its way.
Of course, change is not exactly here, as Obama makes clear in his wonderful speech in Chicago which I only got to watching this morning. It is still on its way, it is still in the making, it is still to make: "We have a lot of work to do". But this election gives us--and me--renewed hope that it can be done, change can still be made. If you didn't get to hear the speech, it is on YOUTUBE--Obama speech in full version, 17mins.
But I think that all of us should also do honor to his contestant, McCain, who gave a gracious concession speech, bringing us much joy as it certainly brought him sadness. To listen to that speech on YOUTUBE--McCain's defeat, a lovely defeat to us, perhaps, but certainly a deep defeat for him, as this was his last stab at the Presidency. He did a beautiful job in this speech reminding everyone democracy is also about losing, and about how that fight was worth it. He should be thanked by all democrats, for his kind words for Obama, his competitor, but also for all he has done in his opposing views to remind us why we make the choices we do. For providing us choice. Thank you, McCain, we are sorry for your sadness. Thank you for your kind support of the man we also selected, and best to you in your continuation.
Finally, a few pics from the night here in Paris: HOW PARIS CELEBRATED THE ELECTION: 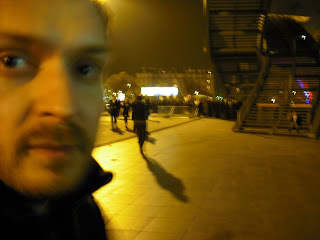 MIDNIGHT: Palais MAILLOT. The line is hundreds strong. Everyone is on the guest list. No on is getting in the door. Our attending French contingent, Poet Fred Forté, says with his eyes "You guys really want to wait in this line?" Or perhaps he is thinking, "Goodness, so many Americans all in one place in Paris, what a mess!" :) 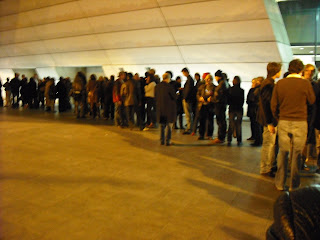 Above: One third of the Line. One thinks perhaps they should just open the mall and let us wander aimlessly in seach of the news of what is happening overseas. 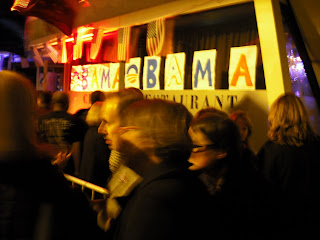 "Who's on the List???" All of us. We were about to bail entirely when I said, "Let's just go check out the door scene". It was pretty clublike, and disorganized, and so, before you know it, we are in the door and among the... whatever, as seen below. 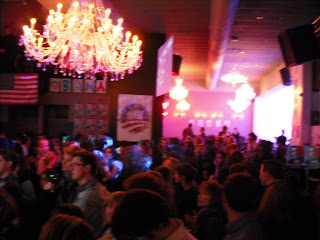 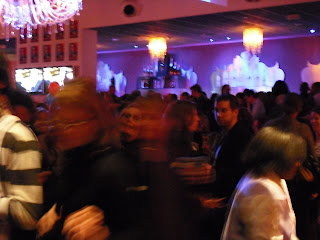 We waited for this? Yep, overpriced drinks and no seats unless you can buy a bottle. Clublike, as I said. So we... made the tour, went up and down the stairs, stared at everyone, and LEFT. In the above picture, Michelle Noteboom can be spotted in the central blur space. Is she thinking what I am? "Let's get outta here!" Yep. So we taxied, in defeat, towards Mich and Fred's place before getting the Huxta call--"There's space here" in the Eccosais pub The Highlander. Leave it to the Scots to be welcoming to all the put-out Americans! Off we went. The pics below (as well as the first one on this post) are from a fabulous rest of the evening!: 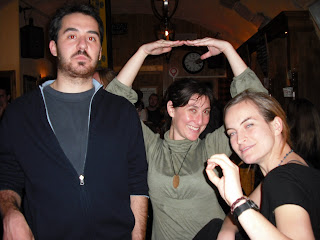 Above: Ariel (French), Cara (Californina) and Miss Huxta (of Pennsylvania) go whole-bodied "O" for O-bama in the basement of The Highlander pub near Pont Neuf. Below: Ariel says to me "This is how it is done" and see, I manage to "O" for Obama, too. What can I say, it is late and getting later, the results at this point are only for the East coast and we are... waitin' waitin' waitin', the clock ticking towards two, then three, then four am. 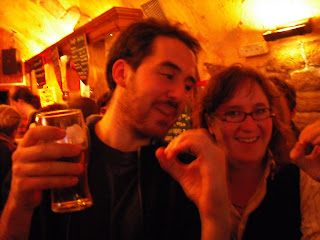 An American Election is nothing if not for the support of its Canadian contingent. For that we thank, pictured at right below, Carolyn Heinze--Give her an O!!! And with her, yep, more French boys keepin' us in line, and doing the ever thoughtful "Yes!" as CNN announces exciting new election results--though their "Yes!" comes just before turning to ask, "What are they saying on CNN? What are all those numbers and colors?" I never realized that we had the world beat in silly graphics during elections--but, yep, we do. 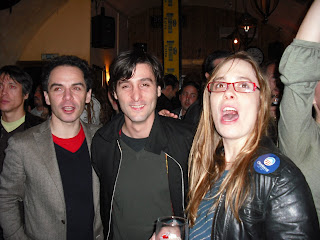 THE PINS: small, but to the point. To show our support to others, as if they didn't know we were Obama supporters. I prefer the pic with Frec and Mich. Cute, no? I'm wearing--and about to lose--Fred's pin. Sorry! Anyway, we stayed at The Highlander until late and later, and then with hope in our hearts headed home to learn the election turned out alright, finally, for once!!!! 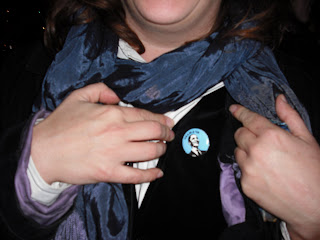 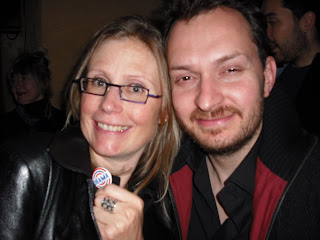 Yes, the streets (and I) felt happy yesterday after the big win!

And the Highlander is right in my back yard. I shoulda called ya!