Of Deserts and Mountains and Mesas... 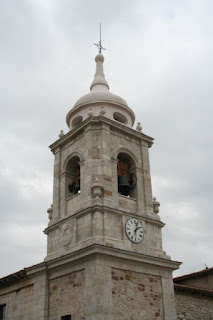 Far and farther from the maddening crowds. Sometimes too far perhaps, but comfortably so. I walk solo much of the day, and feel recentered in that. Access to internet services is also far between now, and often on dial up. Mostly because after coming over the last of the lovely Montes de Oca mountains (from Villafranca--steeple of its church which sat opposite our Alberge and was the site of the party--with teens still partying for their Fiesta even drinking pint glasses of wine, offering me drinks, at 7 in the morning as I headed up and over the mountain) and onto Burgos (with its famous Gothic cathedral, a massive structure, pictured below at the right here) pictured a day and a half later, but a Sunday (thus all amenities closed), I have entered the Meseta.

This is the first of two mesetas, a sort of desert area, arid and vast and arid and more of that. I had been warned about drinking water, carrying extra just in case, not drinking from fountains, and distances between drinking water options, but no one mentioned the WIND. With no trees 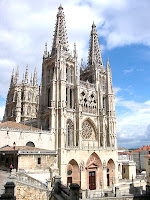 or, well, anything in sight at all for many many many hours yesterday I walked straight into the most astounding wind in the early afternoon at the end of my 30+km trek. Sand kicked up and stung my shins and I often had to keep my head down to use my dad´s fishing hat and sunglasses to try and keep my eyes and face a little protected. I often thought of desert tribes with their big scarves and thought how logical it would be to have one! I almost decided to get out the cool Navarra souvenir scarf that Michael, one of the Irishmen who has now left the trek for home, got all of us when in Estella. But being me, I kept my head down and tried to just keep going forward, my sight on the stones before me. I tried to breathe through my nose as much as possible to avoid inhaling so much of the dust and bits of hay also flying in from various fields and chalk dust from the stones. It was the hardest going yet, warm too, but I just felt like I was pressing myself and my sack against a force pressing back against me. I continued like this for awhile, feeling sure that I was making good time, as I was constantly heading forward. But When I came to a marker in the middle of no where which read "Hantanas, 6km" I thought I would flip out. I was not even half way.

It was just so terribly battling the effort of going forward and seeing no one and everywhere you looked vast golden-colored plains, no trees! It was beautiful, when I turned my back to the wind´s sheer force and looked out over the vast mesa or along the path at some of the bright violet thistle and wildflowers which still grow there. I was passed by a few bikes, but was always surprised that after spotting them behind me it would take so long for them to get to me, and then it took them ages to get much farther than me in the wind.

After every slight upangle on the mesa, I tried to look forward and spot Hantanas. I thought if I could just see it was there, that would make the going easier, more reassuring. Tired, I took another pause on a pile of rocks I came across near a tractor digging some irrigation ditch (it felt a bit comforting to know another person was within sight, and was also a sign that the village had to be somewhere). You could see in 360• and I kept thinking "where is this village!!!???" When I thought it was just crazy I suddenly came across a sign which read "Hontanas, 0,5km" And I looked and looked and NOTHING! I thought, it cannot be. But just a little farther there was a sudden dip and there was a sort of bowl in the earth and inside that bowl sat the village and I thought THANK GOODNESS, and How marvellous! 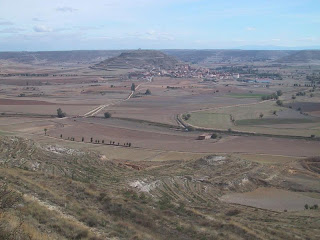 And then today, rain. Isn´t that ironic? Come to the desert and you get rain? It was kind of nice. It stopped within the first hour of my walking, but I did get out the rain gear and put it to use, and it made the morning cool and kept the dust down in the afternoon as the wind picked back up. It brought out rabbits in throngs, and huge black bettles along the edges of the trail, and ants and some birds. It pinned the dust down for a short while at least.

I am mostly trekking in companionship with a group of French people. We meet up in the evening and at pauses, such as in the town picturedd here by Andy Burgess, which is called Castrojeriz, and which I also took a picture of when I got to the top of this little mountain) sometimes cook or go for food together. I also see the remaining troops from the English and Isish band (the 2 Canadians, Paul and on occasion Lars who has had a lot of foot problems). It is nice now to run into people, as the effect of the masses died down at Burgos. The groups fan out across the villages and there are always spots to stay in. I am going a little slower than originally planned, though did 30 some kms most of the past days and only around 22 today. Also had to go over another fairly sizable mountain today, which was a bit unexpected (had I read the guidebooks, well...I might have known!) I have gone over 2 sets of pretty major mountains (the Pyrenees and the Montes de Oca), a few smaller and now there should be more flat land until at 2 last points closer to the end there are again some mountains to deal with.

Tomorrow, back out onto the Meseta. Looking forward soon to areas where there is nothing for a minimum of 16kms. Big plains of hay and dry chalky land. The earth remains difficult for me to describe, because quite peculiar, but there is a beauty to the vast space, the sky and the shadow of clouds over the land. There is a beauty in keeping going, in the walk, the path. I listen to recordings from time to time of poems by Susan Howe, George Oppen, Ted Berrigan, Charles Olson, Nathanial Mackey, Kamau Braithwaite, Michael Palmer. There words come at me, competing with the wind, under the open sky.
Posted by Jennifer K Dick at 6:52 AM

Thank you for your blog of your pilgrimage. It was very beautiful and inspirational for me. I am getting ready to start a short walk for a couple weeks across France starting at Le Pellerin, near Nantes, France. Any ideas on what to bring or not to bring?

Many blessings to you,
Jennifer Holt