Miles and miles to go before we sleep... 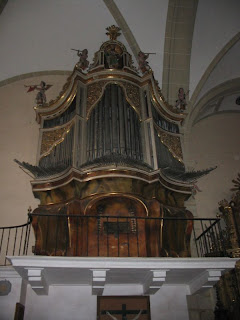 Tonight, here in Redecilla del Camino, a cool breeze (dare I say cold?!?) is wafting in. We have been steadily climbing, but so steadily that the effort goes mostly unremarked. I would say this is the region onf Spain most like the one in France where I began, but the region (La Beauce) in France is flat as Kansas whereas this is rolling mountains we will edge up to 1150 feet up again perhaps tomorrow already.
The pleasure of staying off the main tracks continues. I adored waking in a little sleepy village and heading straight off into and across fields (vinyards this morning, wheat this afternoon). I have latched onto the French contingent a bit at the moment, enjoying a bit of company in a "group" that is not one: all of the people are travelling alone, and each takes their own space and time in a variety of ways throughout the day and evening.
But one of the pleasures of today was long breaks in good company. The first for tapas in Santo 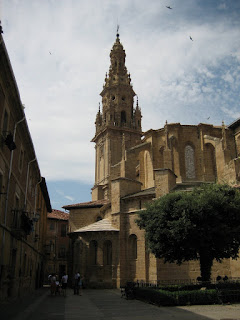 Domingo de la Calzada (pictured at left is the lovely chirch whose spire led us towards it from a great distance!). It was a charming little city where I am sure the swarm of guidebook followers has descended tonight. We got in around 10h30 and people were already lining up for spaces in the hostel that opens its doors at noon. Ran a few errands then found a great plaza OFF the main path in the city and plunked ourselves down on the terrasse for drinks--excellent coffees, and even better Tapas--in particular an odd combo: small piece of toasted bread topped by spicy sausage patty, fried calamar atop that and then little fried quail eggs. This cost 1euro20 a piece, as did the mini lasagnes in a tart format. Yum!
After this brake, we charged on towards Grañon where many people were already stacking themselved along the floor of a church converted into hostel. One of the French walkers I have met had decided to stay here (he got in early and by the time we traipsed in he had decided to stick to the plan and that village.) I had already decided I felt like going farther, and so did the others, but we again had a lovely break. This time a sort of thrown together picknick on some stone tables and chairs under trees. Cheese (Spain makes wonderful cheese) and ham, the usual cereal bars of every sort, some figs I had picked up at the village Alimentacion in Azofa, etc. Around 4 or a little after, we headed back out into the vast landscape of wheat. The trail trekked right and left through fields then over a bluff into a new region of Spain the Castel y leon or something like that (I will have to get back to you on it!) and down a last slope into Redicilla del Camino--a village under total renovation, with no shops, just the hostel tucked behind the church with its wild organ (in photo at top of this blog entry) and a few great statuettes among their gold leafed decor. After a quick tour around town to watch electricians stringing wires over houses and yards, construction workers pouring concrete and lugging some heavy equiptment round in a wheelbarrow, I took a quick journalling break on one of the benches (proudly declaring they are provided by the catholic church!) of the village opposite an old couple watching pilgrims pass through or just enjoying the last of the afternoon sun (while I hid in the shade!).

One of the great things about villages in Spain along the Camino (and perhaps generally) is that many villagers come and sit along the paths or roads in the evening and wave and say "Hola, buenas tardes, buon camino" as you pass.
When I am tired during the afternoons, too, I find it strangely uplifting as one of the bikers flies past and waves and calls back "Buon Camino!" No, my little feet will not carry me so swiftly to my next resting place as their two wheels, but the distance seems possible again, the solitude of my own steps part of a moving, part of a path, part of going forward.

I love that the villagers are so welcoming and kind. In my new place on Spaight I've been trying to say hello to people and sitting out on the porch with my journal or my guitar as often as my currently allergy-plagued nose will allow to put myself where saying hello is more necessary and normal. I find that having a cat outside with you makes it easier to strike up friendly conversations. Hurray cats, the social lubricant!