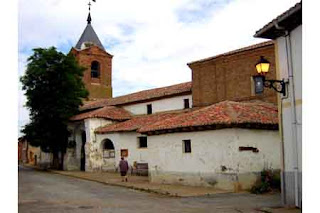 n´arrete pas le pellerin! Or so they say in French ("The morning rain does not stop the pilgrim!" and with a computer with accents!) And so it was. In the pre-dawn dark of El Burgo Ranero (church of the town is pictured at the left here) in the house of a gramotherly señora who had fussed over everyone as they cooked in her garage-cum-kitchen set up for the purposes of pilgrims passing through and making dinner, I and various other pilgrims (2 French, 2 Belgian, 1 German living in Barcelona) gathered in the spare bedroom with a foldout couch and its white satin sheets, table with 2 chairs, ancient tv that probably hasn´t worked since the 70s and a microwave: our ticket to coffee and around which we discussed the weather: RAIN. And cold wind.

Regardless, a little while later we geared up`and headed off in twos or alone whenever we had managed to talk ourselves out the door. It was still mostly dark when I took to the road, my father´s waterproof fishing pants on and the big green pncho doing as much to protect me from the wind and cold as the rain, which was only spitting a little. I told myself this would not be so bad, really. But then there was the lightening and thunder and I thought, hmmmm...aren´t I the tallest thing out here in this flat expanse and carrying two metal poles (walking poles) perfect to attract lightening? As if to confirm this, I passed 2 stone crosses on the path by some small, recently planted poplars, as if there had been two pilgrims struck by lightening some other morning in the past! (Later, many of us would have a laugh about thinking the same thing) And as we headed off the 12kms to the next town, at first it seemed it would just sprinkle from time to time, but then, about 8km out, it began to take on that grey sky solid rain may never stop all day. I wondered whether the gear was doing its job as my glasses rain water directly under my nose so that from time to time I would inhale it as if at a pool (ah, other summer choices: beaches, pools...) I passed and was passed up by various walkers, and we all gave each other a little, wet nod like soaked cats and "Hola" ed and "Buon Camino" ed one another with a sort of "where on earth is the next town, perhaps I will stop already" look.
The end of the rain... Of course, as weather likes to laugh at all of us below it, I trekked into Reliegos just as the sky cleared up. Dripping, I pulled my hood down to see whether the wind might start to dry me off already. I looked round for the ever prominent "Bar" signs and arrows that greet the masses of pilgrims at each village, and a few señoras came out onto their porches to sweep them of water and some leaves that had collected. As I said hello to one, we both laughed and I managed to say something that I hoped sounded like the sarcastic "Aren't I gorgeous? This is the new fashion" and she laughed, so something made some sense to her, if not the sense I sought. 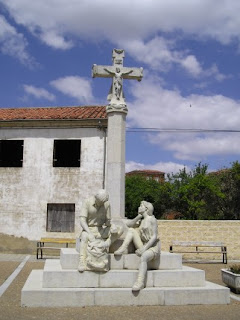 In the bar, a warmed slice of potato tortilla and a cafe con leche mulled over long enough to see the sun peer out and have the clothes dry a bit. The gear had held, but as I had been wary of the cold, it had also successfully held in all of my perspiration and condensation. Damp on all sides.

I then trekked back out and off to the lovely village of Mansilla de las Mulas (Pictured left is the cross with statue of pilgrims taking a break that one encounters just before entering the walled older part of the town, and old fort village). I felt like I had poems running through my head, a return to language that came to me in a voice I had not heard through my fatigue in a great time. Poems from the Lili series, bits and pieces of images from here. Perhaps words returned in these sorts of rhythms and bits because I have been listening to various authors every afternoon at points when I get a bit tired: Y Konenyakaa, Oppen, Clark Coolidge, Joan Retallack, Rae Armantrout, Susan Howe... Yes, thank you PennSound for the recordings.
Today also I listened to some poems on my walk to Puente Villarente (the sign, like many we see upon entering each village, is pictured at the right. Each sign contains symbols to tell us what commerce and monuments exist, and what roads one can take in and around the town) and the Alberge San

Pelayo, after a great visit to the center square of Mansilla where pilgrims and locals alike 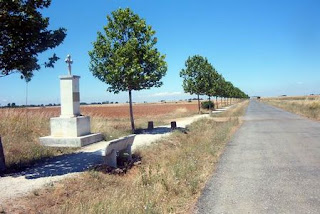 seemed to enjoy sitting about watching the Saturday shoppers and passersby and tourists, eating pastries, sandwiches, fruit, nuts. It was not an exciting last walk, as the path under trees bordered the highway which was busy with Leonnise folks heading out of the urban center and off to the country. Nonstop traffic whizzing by one one side, though some lovely fields on the other (the path pictured at the left is from yesterday. Nice benches which I often paused on for a few minutes of conversation or a foot break. Today was similar visually but the fields are corn and there are more trees and the road is a real

highway, darker paved with painted lines and traffic buzzing along it). Greener and greener here as we head back to areas with more water. I wonder why it is that I keep marching on forward joyfully, seeing as I can already the foggy bluish purple of the next mountains, the end to the flat terrain of here, but another climb and then a greater descent, as El Burgo was 881m and here is at a similar height.
A last image to end with: of a village I passed through yesterday called Moratinos. One can see on the right side of the photo the doors cut into the sort of hill. These are where wine is made and stored, and a villager seeing a few of us called us over and took us inside his cellar, to see the big old oak vat where he mashes the grapes. You can also see the color of the houses, many here are made of what is called Chaume in French, a mix of mud and hay. 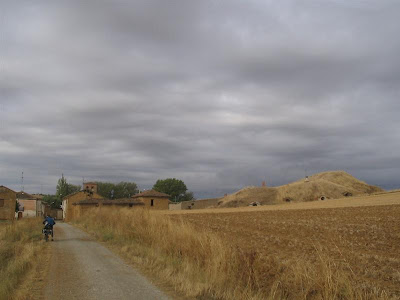 I like when you said "where he mashes the grapes". A little change from what one is used (don't we normally say crush or press?), but so great.