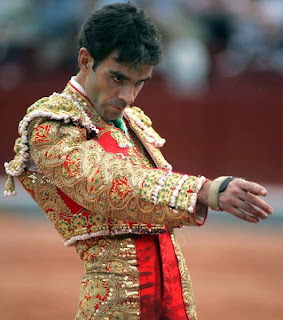 Estella, España yesterday: the town all in white with red scarves and red sashes, white shoes laced up with red laces. A postcard-perfect Spanish girl leaning out over the great plaza over her iron balcony, backed by the warm ochre and mustard-yellow colors of her building. Below her, song, dance, ice-creams, balloon sales, late-night fireworks and.... bullfights. I sat in the shade of the Plaza de los Fueros with the anglophone contingent (the Irish drinking their wine of course--a fabulous influence on us all!) and watched the Siesta hour pass into early evening.

As the town reawoke to their second day I, along with many other locals, traipsed up to the Plaza de Toros to see a bullfight. When I got there, a little after 6:30pm, I saw that, as this was "dia 3" of Fiesta, the prices for entry were still quite steep. Instead, I peeked over the blue beret of the man at the door to catch sight at just the right moment of the upper third of the matador's body. I was just in time to see one shoulder tilt up and the other down, the gold of his costume reflecting the bright sun as he swirled and then UP came the red cape! It seemed a graceful dance move, his partner out of sight below the walled barrier of the stadium.

But the entrance became blocked, as other customers entered, so I decided to take a tour round the Plaza's exterior in case there was another potential view. Many locals who has apartments in neighboring buildings were out with their families watching the event from their balconies. It seemed unlikely that I would catch a glimpse of anything more, but then I came round to where the two Picador's were sitting astride their steeds in a parking lot! They were completely out of place there among the parked cars, also in elaborate gold brocade tops, chatting with some of the other men about what was taking place inside the ring. I took a few photos of them (to be posted when I get access to my pics again) and then returned to the center of town just as a Celtic music group struck up in the town's square.

It felt for the first time, in Estella, like the night was alive. The vibrancy of Spain's nocturnal side seeped from every corner, even though I myself had to dash back after a quick dinner (in Casanova Restaurante) like Cinderella from the ball. I was in bed by just after 10:30pm. Not long after I had climbed atop my upper bunk bed in the room with around 40 others the fireworks exploded outside, the room shook (we were very close to where the fireworks were being launched). So I hopped back town from my top bunk and with my face mask (to keep light out so I can sleep!) round my neck I ran outside with a few of the Hostel staff to watch the brief light show.

Morning again. comes earlier now. The first alarms go off around 5 and with the increasing heat wave and tomorrow's longer hike through perhaps more fields (thus little to no shade) some of teh pilgrims have decided to get up at 4:30 and be on the road by 5. In the pre-dawn hours in the dark they will inch out of the town we are in tonight: Los Arcos, heading over towards Logoraño. The idea is to arrive before the heat becomes unbearable, thus before 2 or 3pm. We expect this heatwave to last through Thursday, and as we walk sometimes cars kick up dust coating us and bikers pass leaving a white trail in their wake. The ochre and white soils like the air taste arid, which I imagine is great for the vineyards lining our trails. We are more attentive to drinking water, water and more water.

As I head towards the desert and a totally different climate, soon to leave this Tuscan-like 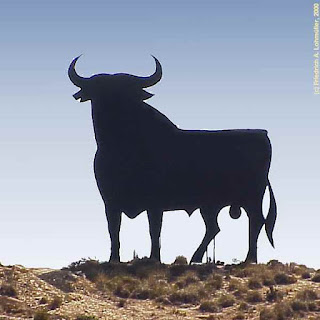 region, it feels like the long trek lies ahead. Tomorrow I will be entering into my 20th day of walking. The idea of flying from one place to another in a car, bus, train, plane seems peculiar, fast. The news of the word, incomprehensible to me here, seems small and insignificant. I focus on my body moving forward, on my thoughts of friends I look forward to sharing stories of things I see each day with. But also, I have adapted to the energy of the group, a sort of electricity. We move like a herd at times, other times stretched out into little points over the landscape, sometimes hours wandering the paths alone, other times chatting with people the entire way. I already beging to realize the arrival in Santiago will feel extremely powerful. There is the energy of the river growing between languages and people here flowing quickly quickly towards the west coast of spain, and Santiago, Santiago. We are like rivulets who enter and depart (like, sadly, our 2 Irishmen--Michael and Gerry--who are heading home after tomorrow along with others) but others will join in. I look forward to discovering the path that lies ahead, the fields, the colors of the landscape and the peaks of mountains fading at our backs, paling farther and farther away beneath the bright sun.
Posted by Jennifer K Dick at 11:50 AM

Love reading your blog peregrina-Jen.
Have done a couple of caminos - walked from Paris to Spain in 2004 so scrolled back to a few of your earlier posts written in France. Thanks for sharing with us old peregrinos who now visit el camino in our dreams or in cyber space!

Come on pilgrimage.
Let us walk together
the road of life.
We will go on
well trodden paths,
and also open us new ways.
We will seek,
we will search,
we will rejoice,
and perhaps we will sing.

You cannot come as an onlooker,
that leaves you on the outside,
yet still influencing us,
as we influence you.
Come and share your experiences,
your sorrows and your joys.
If your prayer has gone dead,
your God is too small,
your vision too narrow,
Come journey into new depths,
let life be an adventure.

Come and participate,
come and discover -
we will go to
strange places,
we may even meet dragons.
But we do not journey alone
we go together
along the road
and our God goes with us.

(David Adam in The Road of Life: Reflections on Searching and Longing)

I have been greatly enjoying following your journey and becoming increasingly envious, especially now we are enduring more heavy rain here.

My walks have been restricted to the North Dorset Trailway along the course of the Somerset & Dorset Railway, which closed in 1966.

May your pilgrimage continue with sunshine and joy!