I just got into Santiago de Compostelle, Spain, at the crack of dawn in rain and lightening and thunder. 1080kms walked in 45 days. Some alone, some with others. Last night stayed in the fairly prisoner-type alberge (can house 800 people, in blocks) where I was in block 30, room 6, unable to sleep as red and white streaks of lighening tore up the sky, making a nearby mountain visible briefly. I walked up onto a hill and looked out towards what felt like a return to civilization--a big sity with interstate and peripherique roads running in and out of it, hotel lights and the still hidden cathedral hunkering down somewhere amid the neon mass. The storms that passed over were beautiful, angry, and calming too. I thought of when I used to listen to Fresh Aire tapes as a teen to help me sleep, and the ones which had rain recordings on them. Between each small storm was the silence interrupted by crickets. And then it was morning, and the masses in all of the blocks gathered their things into packs and onto bikes for a last march forward, the tiny 5km distance left between them and the end of this voyage, this part of a voyage. Many stopped for breakfast or were still getting ready as we departed the complex in the dark.

As I came into the city with Nora, Capitane and George--3 Czechs I have been walking with--the city and its suburbs was not yet awake. Busses passed us heading out to farther suburbs to pick up sleepy workers, some whose faces pressed against the panes as they napped en route to work with the returning public transport vehicles. I felt terribly disappointed in how banal it all felt, the blocks of housing, the concrete, the grey sky which, for the first time in 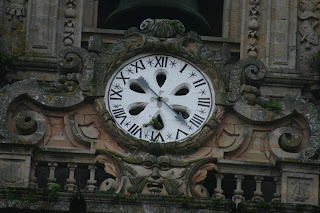 all of this trek, did not erupt into some brilliant striation of color as the sun rose. Yet also it felt fitting, this HLM/city housing like a space of purgatory before we got into the fabulous old town center with its buildings with their statues, ironwork, attention to aesthetics. A transition from nature through its destruction to somewhere between the two. Also pasts and future colliding, construction and destruction, reconstruction. The transformation of arrival?
There was a peculiar moment as George and Capitane took a detour when Nora and I came to the Cathedrale in silence and there was just us, for the longest time, only two of us, and the dawn, the rain pausing, the face of the statue of St 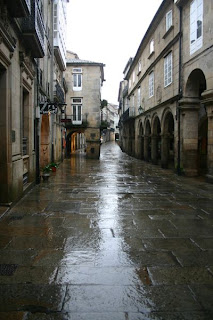 Jacques (St James in English) looking down from his perch above the door at the old pilgrim´s entranceway, now the one few people use. We had a good quarter of an hour there, alone, to just take the moment in, to look up at the ivory colored face of the clock in that dark and wet becoming ever lighter, before we went round from to find the first tour busses arriving and a sort of Versailles-visit frenezy of tourism pick up.
Now the city has filled up and is bustling with pilgrims and tourists, tired and wired groups. I am staying in a great place in the center of town with big windows onto a church and flower market, for a whopping 12e50 a day along with Nora, Capitane and George--the 3 I have been walking with much of the time since El Ganso. My journey here is finished, but we will go out to the sea and see the waves and then head home to the next road waiting.
Posted by Jennifer K Dick at 7:05 AM