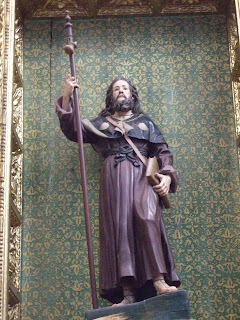 In Portomarin. It is a village of white buildings in these soft, leafy green and rolling mountains, more like rolling hills, in Galicia. I left Sarria realize about this morning in a white fog which lifted and became a sunny day over the 23 or so kms, during which I passed the well-graffitti laden official 100km marker stone. And tomorrow I will pass my own marker stone, when I hit the 80 it should make 1000kms (perhaps a bit more) that I have walked myself. A surprising amount, and with only one sort of half day off in all of this time, the day I spent in Poitiers getting train tix to St Jean. What does one learn on the road walking everyday for this long? What does one themselves, others? As a writer, what does this experience give words? Or take from them? Last night, as the alberge prive rattled with the snores of others in every room, I lay awake wondering at these things, at what it will feel like to enter Santiago in the early morning alone as I hope to, to see the great Cathedrale (far bigger than the one in Astorga, pictured right below along with the Gaudi building pic which is currently a museum for the camino I passed through a few days ago), to then go by bus to the sea, to Finisterre and look out on the horizon line which the Spaniards once believed was the end of the world, the place where a giant waterfall lurked, a waterfall that would shoot you into the sky (so Jose, a Spaniard I walked with 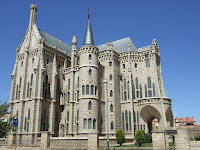 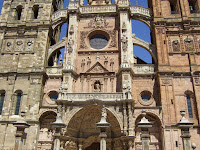 for awhile this afternoon told me)

I think everyone is sort of slowing down. just in no rush to be there, at their destination, at the end of whatever this for each of them, us, me.

Today, in the fog of the morning I came to a small monastery from the XII century, and took the path left to it (the camino went right) and stopped in and said hello to the woman minding the door and admired the wooden mantelpiece and the simplicity of the place but especially outside the crosses bordering its stone walls which were just grey enough to be distinguished from the white of the air. Then I went on, the sun came out, the fog burned away and the day became green and fragrant. People picked the ripening blackberries along the walk and ate them, and again I came to a cafe and had a drink while a heard of cows trundled past the tables with their shepherd. The terrain here is all u 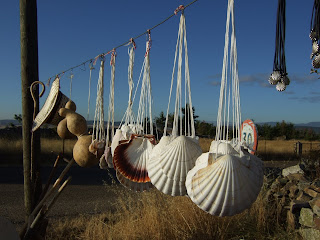 ps and downs, rural roads winding between small farms, plots of land separated from others by stones and small stone walls like I have seen in Ireland and parts of England. There were sometimes no sounds at all, and others there were chickens, roosters, carious wild birds, dogs and the constant tic-tic-tic of walker´s canes on the paths or striking stone. Parts of the trek also reminded me of Iowa, corn fields and like up near Dubuaue, rolling hills dipping into valleys. Only here the houses are very thick old stone, often small flat stones stacked together to make the dense walls protecting the inhabitants from the winter--which people are already preparing for, as I keep seeing stacks of wood, or people getting their wood delievered and piling it up under shelters or in barns.
Posted by Jennifer K Dick at 8:58 AM

Thank you so much for the beautiful postcard. Tinisha and I loved it.

It's really cool to be able to read your chronicle of your trip. I look forward to my gazette.

I'm very impressed with your stamina and determination in spite of discomforts and your ability to allow the poetry of the moment weigh more in your memoirs than those discomforts.

Every journey makes us into something new that has never existed in the history of the universe. I look forward with joy to seeing who you've become.

This is Jamiella; Z and I were both supposed to send you a message but he published before I got the chance to throw in my thoughts!

Really, both of us are impressed with your journey and are thankful of the inspiration it gives... it seems that no journey is truly for any singular person alone.

The sheer number of places you visit, people and things you observe, is almost overwhelming, but it seems to be good nourishment for the eyes. Your pictures are absolutely stunning. They make me very excited to be heading to Europe again!