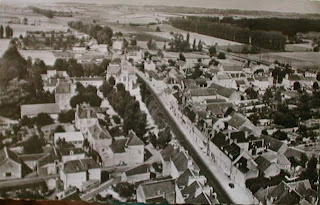 I thought I should give you a sense of the meander. For today seemed the reverse of the past few: I meandered. I stopped and wrote in my journal. I paused for a great deal of time on the bridge of La Creuse river just after passing from the Inde-et-Loire into La Vienne Département, and then later, near my final destination (Dangé St Martin)I paused in the shade of a huge tree on the corner of an unexpected enormous stone wall with turrets, though the turrets were crumbling, one with its old wood door still hanging by a thread on its hinges, but filled entirely up with a pile of stones from its once greater heights. Anyway, here are some images plucked from the web (and i thank you that took them for these) as I still have not found a way to get mine off my camera and to you!
Morning. Waking around 7 in Sepmès. Land of goat's cheese, in particular the Ste Maure de

Touranine. (pictured right). We had some at dinner last night, a dry one, which was rolled in cinders and had a slight tartness to it--YUM! The dawn was chilly, and I opened the wooden door to say hello to the household's fat tabby keeping guard over the elaborate garden, and to see the sky half overcast, uncertain if today would bring rain or more hot heat making me a bit pinker (red?) every day despite the fact that I feel imbibed in tanning cream. Breakfast: copious. Tartines and homemade jam, a yogurt, peach and coffee. Then onto Draché.

Draché. Or, well, the roads leading to and from it. this is the main highway, which I don't take. If I did, I would be walking 1/4th of the distance! But I serpent around it, and back, constantly. It also serves as a compass, or at least did today as i wandered along nearby fields, always aware that if I were still chasting the N10 down south, then I was still heading the right direction across the fields. Mostly sunflowers here, and some harvested wheat. The soil is whiter, and I notice more colorful butterflies--tiger swallowtails, and tiny purple ones, as well as the imeperials.

Off down from Dangé I crossed to la Celle St Acvant, and then over the

N10 bridge which has the stone pictured at the right here (and I took the same exact photo!) marking the separation of one department and another. Just over the bridge, one is also in another village: Port-de-Piles (which sounds like the door of batteries, but...)
This villlage, with some small prop-up pools in backyards and its old church (11th c I believe) has a great bench on which I sat writing for a great while, admiring the view over the bend in the Creuse river. The water, as i looked down over the lip of the bridge, was a deep bronze color, but transparent, so that I could watch the moss waving there in the currents.

And then, after the break, I trekked on towards a town called Les Ormes. I decided to cut away from teh GR map (which takes a HUGE detour round the countryside, up and down hills, and... well, you ge the picture. It is a bit of a marathon) And so took the roads through a few farms and alog a few fields and popped up onto the N10 which slows in town. There, I had an unexpected touristy moment. No, not seeing the Chateau des Ormes, for those of you who know it exists, but in fact, thought I did peek into the parc at the back of the Chateau, just opposite I saw and took a picture of the "Bergerie des Ormes" then came across a big door which said "Le Relais de poste aux chevaux des Ormes" ring and come in. So I found a

metal pully and pulled and heard a bell clang somewhere inside and so I unlatched the big blue wooden door and entered. Inside was a gorgeous, vast courtyard with a bizarre sort of center space--a large cobblestoned dip and at the bottm a pot of flowers (you can see it on the picutre at the left). I went exploring, not seeing anyone, but was soon joined by the gardian, and grandfather of a family who lives in there. He explained the history of the horses who came and drank and washed their feet in the round space I mentioned, and showed me some documents on the history of their route--which is pretty much my own route! The would run the post up and down the region in the 1800s, before the trains took over.

After Les Ormes, I continued on my version of the trek to find myself on one side of a TGV set of rails needing to get to the other. What to do? Backtrack or try to outrace a train going 200km/hr? So, of course, up and around and back and over the bridge I had passed I went. On the other side, I headed off into the fields and along the village and farm routes again. On occasion it was sunny and hot, but then a cloud would come and sprinkle me with rain so I would throw on the poncho and sweat and then the sun would come out and practically bake the poncho to my skin in a few minutes! I was making excellent time, so stopped along a large wall not far from an old church I did not make the extra excursion to see. This is the turreted wall which I mentioned earlier. After following it along one side I came out to where I could see the steeple of Dangé St-Romain prominently announcing my destination for the day (the town pictured at the top of this blog entry, Dangé St Romain). The church, pictured here, now has a rooster weathervane atop it, which has replaced the cross. I went in and explored (picutres 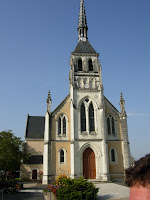 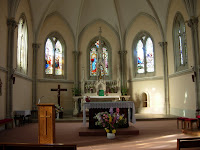 here, are what I saw) and then toured the village a bit, seeing that Obama drew great crowds for his spech in Berlin, noting that the world has gone on going on as I meander. And then, calling from a phone booth the family I am staying at the home of now, in another house with an astoundingly beautiful garden (this one bordered on one side by small grapevines) I ran into one of the pélerins (pilgrims) on bike who had stayed on a few days in Tours. He left Tours this morning and will also be here tonight--and i thought, how amusing, the difference in speed! Here, it took me 3 days walking.

And so, as the haze of the afternoon heat and humidity drops away from the blinding yellow of the sunflowers here, into a cooler, more potentially stormy and rainy evening, I head to dinner with my host family and leave you thinking of the trail to come--off to Chatellerault tomorrow and then towards Poitiers.
Posted by Jennifer K Dick at 9:49 AM