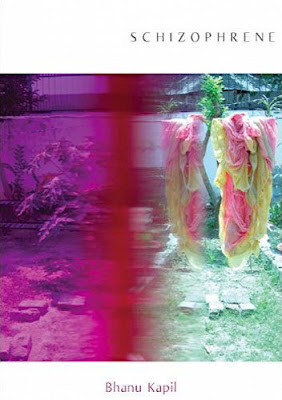 I have unexpectedly become a fan of Bhanu Kapil's books these last years. One enters each through revisitation. Her texts are like places--you arrive as a foreigner, hesitant, seeing the unusual, the unexpected, but you continue to explore and reread lines and paragraphs and pages until you fall in love and feel at home in the world she has made for you.

Kapil's works have an immediate poetic draw where one encounters dazziling lines like in SCHIZOPHRENE (Nightboat books, 2011) "It's already late. A black world coming down from the heavens. Black with stars."(p9) A few pages get read over and over again, and then you are hooked. There is something hard to explain about how her works connect--they feel at once dense and loose, not unlike how her own personal blog functions--http://jackkerouacispunjabi.blogspot.fr/.

At work is collage, lines--and spaces between those lines--as she writes: "When it's rotted to the bone, the paper is covered with metallic fur, which is not paper. 'It was a contemporary voice that had the same power as a foundational voice.' No. It's a first line, then a second, the fragments overlapping with a visceral sound, where the pages stick. I unstick them to see. To read." (p58, Schizophrene)

We, too, as readers, unstick these pages, see and read, feel the visceral, the unexpected violence in parts, the beauty in others. We are jerked back and forth between them, and the surprise awakens some process in us--involvement, engagement.

What I found particularly interesting--and I have yet to decide whether I liked or disliked this tranparency--was that with this short work, Schizophrene, there is also a curious transparency of process--beginning with "Passive Notes" which introduces this book, speaking transparently about what the author had wanted (to write an epic) and how what is here came about through failure and rebeginnings (tossing out the notes--which later becomes line one of the text itself, "I threw the book into the dark garden."(p1))--and closing with her "acknowledgements and quick notes" which again reveals process by revealing encounters both artistic and educational (things learned, from whom) which helped this book come to be: "From cross-cultural psychiatry, I learned that light touch, regularly and impersonally repeated, in the exchange of devotional objects, was as healing, for non-white subjects (schizophrenics) as anti-psychotic medication. In making a book that barely said anything, I hoped to offer: this quality of touch." (p71).

For anyone interested in montage, collage, books of place, of journey, of language, books which are looking at the foreigner and a sense of home or estrangement--this is for you. It is delicate and fierce, and though small, is large in its scope and is magnified by its own need to be read and read again. Schizophrene, like Kapil's body of work, is a correspondance with its readers, opening in them to new spaces of langauge.
Posted by Jennifer K Dick at 5:22 AM

Jen, Can I post a link to this? Nancy