I will be participating in the 57e Congrès of the SAES this week in Reims, France, speaking on June 1st for Atelier 13: Poets and Poetry on THERESA HAK KYUNG CHA. See my abstract below. Hope to see you there!


16h-16h30 Suhasini Vincent (Université Paris 2 Panthéon-Assas), “The Postmodern Reconfiguring of the Old in the New in Suniti Namjoshi’s Feminist Fables”

Abstract for my talk:


“redressed let our history be seen through watermarks heard


thru no one speech”


As I addressed in my recently published chapter “Craig Santos Perez and Myung Mi Kim: Voicing the Integral Divide: Transcending Suffering by Reshaping American History and Language”, multilingualism in contemporary postmodern poetry demands a reassessment of univocal, thus unicultural, national identity, and may be establishing a space for what you have called the “trans-cultural” in your Poets & Poetry CFP.  Examining this within the context of the 2017 SAES topic, Reconstruction(s), recalls Nathanial Mackey’s interrogation about whether reordering history's "linguistic protocols might undo or redo history itself" and the seminal Asian-American explorations carried out by Theresa Hak Kung Cha in Dictée, followed by her posthumously published Exilée / Temps Mort. Many authors since Cha, attempting to recalibrate the self within a sense of nation, citizenship and history, use her innovative forms of hybridity to defy Anglo-centric perspectives linguistically and visually. These authors collage, fragment and stutter, incorporating foreign languages and mixing or including English errors as space for the illegible and unreadable in the reading process; as a method of revising the History of the self and its nations. These authors are not necessarily trying to reconstruct a past that has been fragmented and partially erased, but rather to use fragmentation and erasure in their works to signal the ways that they are constantly written out of culture and History, simultaneously bringing the outsider into their existence. The white page, the blank space, the spatial depth of their pages, take on new meaning in these works, speaking without saying, showing in the stutter, stop, blank, pause, void the illegibility which, for some, is divide, but which for others, such as Myung Mi Kim, becomes the precise space of connection, coming together, of facing one another in the absence of any singular linguistic expression. Weaving  multitudes of cultures and languages into the loom reveals the central issue: resisting erasure, locating what Kim calls Commons.


Much of this work is being composed by minorities who are taking back the self, re-exploring ancestry, origins and histories rich with variants from the given, commodified version of History in which they now dwell. But as they seek to account for the experience of the multilingual and polyvalent self, for lost or vanishing cultures, this paper desires to explore how they—especially in the example of Cha—also end up speaking for an inclusive "we" by allowing a space for that which cannot be expressed—that of the past and the present, of the Other and the foreignness in each of us. Revisiting Cha’s works reveals how authors at the end of the 20th century have come to reassess the place of self and difference on and via the page, reminding us in thought but also poetic practice of what Ezra Pound wrote almost a century ago:


“The sum of human wisdom is not contained


in any one language, and no single language is


CAPABLE of expressing all forms and degrees


of human comprehension.”
Posted by Jennifer K Dick at 6:45 PM No comments: 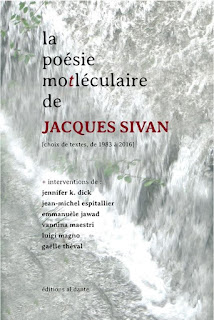 Forthcoming! RDV au marché de la poésie, Paris, to pick up your copy of this beautiful anthology of work by Jacques Sivan. And I am thrilled to announce that I am part of this book, as it includes my text looking at the alpha and the omega of Sivan's œuvre --Grio village double and the unpublished Notre Mission which I have had the priviledge of reading in its varied draft forms. My essay is called  «Le corps toujours autre » dans les sonorités visuelles de Jacques Sivan, pp 29-50