Three of my favorite Paris haunts... 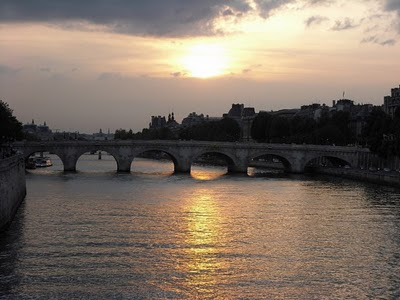 There is nothing like pre-move nostalgia on a sunny summer's day to make you admire the errands you run in a city you will soon be living without. Paris has been my home for over a dozen years now. I know its streets like every meandering poet type. I have walked and run and slipped on these roads in every season, every mood: from the blues on days when I have been jobless and overworked, to the headachy blindness not seeing a thing on days when I was too caught up to notice the city, to days when I seemed to notice every stone's nook and cranny, as in love with the turns and twists and changes of Paris as with my own maturing. But today was that lovely mix of running the everyday errands, getting things done, and reveling in the hereness of here. For my errands involved stopping by some of my favorite haunts, haunts--Places which I thought everyone should really know about! (And I don't just mean walking over the river looking at le Pont Neuf--as in my picture, top right--though that is great, too!) 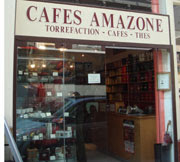 Nothing is like waking up early and pouring the last coffee into the filter, not really having enough. It can make you grouchy. Or me grouchy. But instead I got all happy: I'd decided to stop in at Cafés Amazone. Situated in the marais not far from the Pompidou Center and across from Space Hair's dance grooves pounding on the pavement, Cafés Amazone is a sleepy caffinator's dream. Almost unremarkable, it is situated at 11 rue Rambuteau, 75004 Paris, M° Rambuteau, which is also a comfortable stroll length from Les Halles (exit towards Pompidou) or Hotel de Ville (photo at left from evous, click store name above for link). One can easily fly past and not notice this hole-in-the-wall. Cafés Amazone is half filled up by a giant coffee roaster, the other half with an L-shaped counter behind which rows of coffees and teas, plus some honeys and other local products rest on shelves. 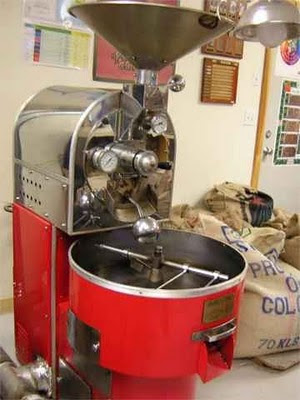 The shop boasts one table for anyone who wants to have a euro coffee in house but not standing up. For the great price of between 3e50 and 5e90 per 250g (depending on rarity and styles of café) the range of grain coffee which can be ground to perfection by the owner for filter, espresso machine, Italian cafetière, etc is delightful. An added bonus is that there is always a coffee of the month--this month is is called "China" and is a coffee with a delectable chocolaty finish. My favorite? The "gourmet blend". I also am a fan of the Ethyopian Moka that the charming, aimable owner always carries. But if you like a darker, more acidic finish to your morning jolt, try the Guatamalan or the "dark roast". This is a place to not miss if you are looking for excellent coffee for the house, or as a gift. I can't stand to get my coffee anywhere else since discovering it!!! Open Tues-Saturday, til 7pm. Often closed all of August for the holidays, so don't wait!
A second, perhaps more cliché fave of mine is the old Bon Marché. (http://www.lebonmarche.com/) I adore admiring all the overpriced, colorful goods in there (the name is an oxymoron for the store). The exotic foods, the pastas that look like they should be framed instead of being consumed, and at Christmas the extravagant window and light displays, with mechanical objects delighting passing children 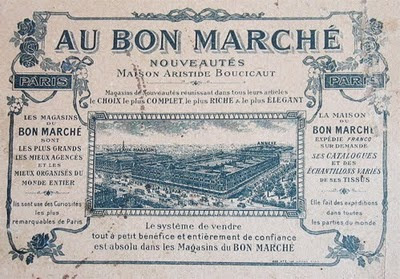 (or adults like me!). As I mill about on the upper floors, I think of Anaïs Nin journalling in there--writing stories on couches between lavish clothing options. She really did this, you know. But there are some deals no one ever tells you about to be found at le Bon Marché (M° Sèvres-Babylone). Lunch, for one. There, among the pricy deli options, is a glass counter area shared with numerous deli options. One which includes 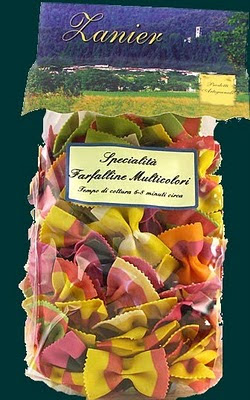 the Chinese traiteur stuff also currently has next to the Chinese offerengs a place for sandwiches made to order (though it does move sometimes, so watch for it) There is no billboard, and it is hard to spot, probably because it is such a deal. Sandwiches on command! And on these huge rectangular slabs of pain poilane-ish bread. They have every veggie it seems--carrot, tomato, lettuce, olives, broccoli, eggplant, pepper, mushrooms, chives, basil, etc. They allow you to chose a base--chicken, ham, salmon or if you want to just stick with none. Then you can have cheese or no cheese and then all the veggies you want plus either tzatziki sauce or eggplant spread or 2 other spreads I have yet to try. The sandwich is ENORMOUS, so bring a friend. It goes for a little less than 5 euros, but as I said, it is really two sandwiches, and they cut it in two.
If you are not wanting a sandwish or are doing that Atkins no bread thing, then go for the Bon Marché Chinese traitor skewers: Chicken rolled in lemongrass. One is enough--trust me! And it goes fro 3euros20. They will heat it (after you pay for it), and there is a park nearby where you can eat in the sun on days like today. So... there is a little bon marché to be found at le Bon Marché! And if you feel like splurging, the delights certainly await! 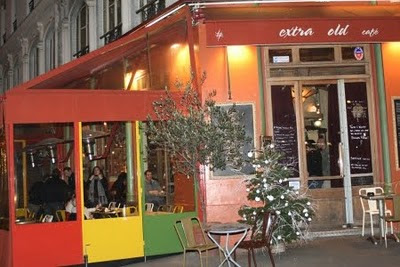 After you have run round the posher and populated areas of Paris, you might be wanting a little less of all that. Next to Nation metro stop on the corner of rue des immeubles industrielles and 307 rue du faubourg st antoine, 75011 (M° Nation or bus 86) is a café we like to call the XO--but which is literally the Extra Old. A popular apéro joint, you can enjoy conversation on the terrasse with a démi beer on tap for 2euros90. Want to stay for dinner? I totally recommend it! Your general, but good, brasserie faire is to be found, but in a cooler, hipper, 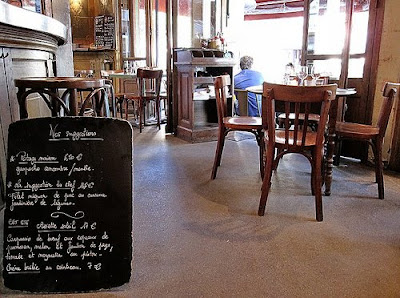 neighborhoodly ambiance of this bar rather than the overneon of the bigger brasseries found along the place de la bastille--The XO is nicely lit, with a fabulous big zinc counter. It's also a place where people of all ages gather. In winter, it is an excellent place for hot chocolate or café crème tucked in with a good book along the heater, but right now, with our summery end-of-June weather, it is better to be out on the street watching passersby as you get some sun (and a nice breeze, too, if you are lucky!)
OK, so... those are a few of my faves. Hope you enjoy them for me while I am away in Alsace!!!!
Posted by Jennifer K Dick at 3:07 PM