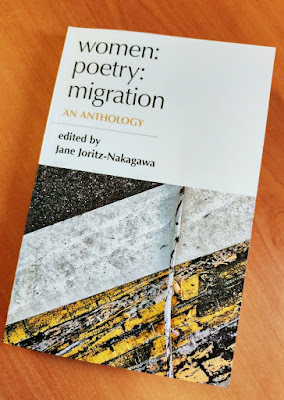 Now out, containing 5 of my poems from my forthcoming Eyewear, London, UK book That Which I Touch Has No Name (2019) is the anthology Women: Poetry: Migration (Theenk Books, 2018). Each poetry selection is followed by a mini essay by the author, such as one found in the great experimental poetry anthology a few years back edited by Etter, one of the poets in this collection which is here edited and prefaced by Jane Joritz-Nakagawa.

I am thrilled to find my work next to poets I have LONG admired, such as Rosmarie Waldrop, Norma Cole or N Nourbese Philip as well as friends whose work I continue to admire greatly, such as Donna Stonecipher, Jody Pou, Barbara Beck, Adeena Karasick, Yuko Otamo and MANY others I will hope you will go and discover for yourselves!

Visit the publisher's website to order, theenk Books: http://www.therepublicofcalifornia.com/theenk/theenkBooks.htm.  For a list of the contributors, please visit the website.  Inquiries: theenkbooks(at)twc.com
What some readers and Critics have had to say about this anthology:

"Exile (to echo Edmond Jabès) is a fundamental condition of poetry.These 50 poets make diaspora home ground. They are the lightning rods of a non-national poetry of “between” that pushes against nativism through sheer aesthetic exuberance and necessity of innovation." -- CHARLES BERNSTEIN

"Women : Poetry : Migration is a superb, refreshing anthology.  As nationalism and the rigidity of territorial and linguistic boundaries, under challenge, erode, this anthology of poetry by women provides a wide-ranging and innovative look at this migratory time in the writing of poetry.  Migratory in terms of place and the changing nature of location, undergoing challenge and redefinition in terms of gender identity, and in transit as a polylingual consciousness and multilingual ways of writing become more and more evident.  My congratulations to the editor for her vision, imagination, and persistence, and to the women who have contributed such remarkable writing to the anthology." --HANK LAZER

"Jane Joritz-Nakagawa has undertaken a remarkable editorial task in bringing together avant-garde women poets who are also migrants.  If, as Susan Suleiman wrote, the avant-garde woman poet is doubly marginalised, then these poets are in a triple lock of marginalisation.  Yet, as the anthology demonstrates, this can be a source of strength and transformation, which gives them a centrality, not only in their own lives, but in the cultural development of their adopted country.  Indeed, some of these poets have played a crucial role in shaking up mainstream poetics."--FRANCE PRESLEY

"“on google earth I write down my name” writes Ania Walwicz in this ecstatic anthology, women: poetry: migration. With sharp eye and ear, Jane Joritz-Nakagawa has gathered arresting, often experimental, poetry by women living outside the lands of their birth. These are poems where the “trans” – translation; transculture; transformation –inhabits the unsettling language of identity and location, with multiplicity, cosmopolitanism and the “push and pull” (Bella Li) of writing desire. Every page offers shifts of imagery or perspective as witness to embodiment, alterity, and hybridities of language. In the plural worlds of the poets, we hear how border crossing constructs a life (Fawzia Afzal-Khan) and “utopianism” always “goes wrong” (Donna Stonecipher)." --ANNE ELVEY

“Where am I going? I am getting there.”  Amanda Ngoho Reavey’s words might serve as a motto for this wide-ranging, transnational anthology, which gathers 50 women poets who live in countries other than the ones in which they were born.  This premise is the spark for an explosion of aesthetic experimentation that both maps and crosses boundaries of gender and nation.  From the shuttling between Japan and Canada, Vietnam and Australia, or Zimbabwe and the United States, the authors gathered here elucidate a poetics formed in process."--TIMOTHY YU

"My response to this collection is subjective as I was once someone who lived and wrote for a while outside of my native land. In women: poetry: migration, I could relive the excitement of pleasurable dislocation I felt some of the time I lived abroad. For instance, I liked experimenting or “deconsecrating” one language with another language to “make it clearer” (Jody Pou) and discovering through writing “what I don’t know” (Tsitsi Jaji). That being said, this collection is open to any reader who is engaged by thoughtful, sensual, humorous and political ideas.  In her essay in this anthology, Rosemarie Waldrop concludes, “If the poem works…it will set off vibrations in the reader, an experience with language — with the way it defines us as human beings.” I certainly felt the reverberation of language(s) as I read the poems and essays in this collection. It’s up to us as readers what we do next." --DEBORAH RICHARDS

"This anthology edited by Jane Joritz-Nakagawa is more than a poetic fact. It is a political fact because it presents to the public poets displaced from their countries and in a real conflict with theircultures. Perhaps this is the definition of poetry: art in conflict with language and origin. Jane Joritz-Nakagawa offers to the reader double exiles: the exile of the tongue and the full "exile" of the female voice in patriarchal societies. Joritz-Nakagawa, in the words of the Brazilian modernist poet Oswald de Andrade, reinstitutes the "matriarchy of Pindorama." It is a work of breadth and rigor, which deserves all attention and applause. As contributor Safaa Fathy says: “I write about what I lost.” Migrating is at the center of being a poet; the book also answers the question of what poetry is. And maybe this is the gain that Joritz-Nakagawa’s anthology brings."--REGIS BONVICINO
Posted by Jennifer K Dick at 9:06 AM

Thank you to Jane for inviting me to be part of this book, and to the 49 other women, some I have long admired, others that are close friends whose work I adore, and others still that I was lucky to discover in my own reading of this collection. It is a fabulous new book toinvite further writing and reflection on poetry making in a multilingual, multinational, migratory field of contemporary existence.