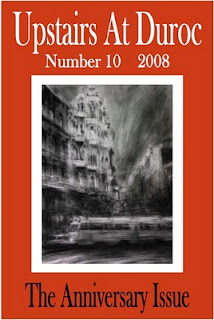 I am thrilled to announce that a selection of my translations of Jérôme Mauche's ELECTUAIRE DU DISCOUNT appear in the new, hot off the presses edition of UPSTAIRS AT DUROC (number 11! The previous issue, featuring an excerpt of a bilingual poem by me is featured in the photo here)
To celebrate this issue, which includes lots of great poetry, prose, art and translations, Berkeley Books of Paris is hosting a bilingual launch reading with JEROME MAUCHE (reading in French), JENNIFER K. DICK (reading her poetry in English + translations of Mauche), RICHARD TOOVEY (reading his work in English) and BONNY FINBERG (reading her prose in English). 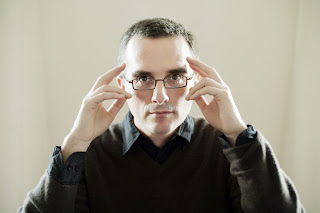 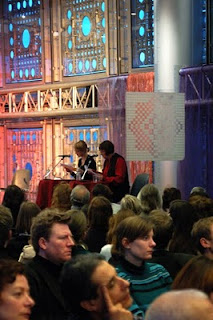 Jennifer K. Dick, from Iowa, is has lived in worked in Paris for more than 14 years now. She teaches at EHESS and Ecole Polytechnique, is the author of Fluorescence (Univ. of Georgia Press, 2004), the chapbook Retina/Rétine (Estepa Editions, Paris, 2005) and the BlazeVox eBook Enclosures. Her poetry also appears in over 50 magazines and 6 anthologies, including 12 x 12: Conversations in 21st Century Poetry and Poetics (University of IA Press, 2009, edited by Christina Mengert and Joshua Marie Wilkinson). Jennifer K Dick's translations appear in the anthology New European Poets (Graywolf, 2008) and in journals Action Now, Conduit & Versal. Several of her translations of Jérôme Mauche's prose poems appear in Upstairs at Duroc Issue 11. (Picture at right: Jennifer K Dick reading her dual-language and voiced piece with Virginie Poitrasson at the Institut du Monde Arabe, 2007: photo by Antonio Meza) 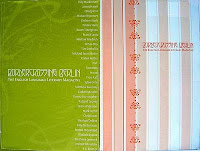 Richard Toovey is an architect and translator who has lived in Berlin since 1989. He helped found BorderCrossing Berlin magazine, chairs the Creative Writing Group e.V. and assists with the annual Poetry Hearings festival, bringing authors from around the globe to Berlin. His poetry, which has been commended in the Arvon Competition and nominated for the Forward Prize, appears most recently in Orbis, The Salzburg Review and The SHOp. 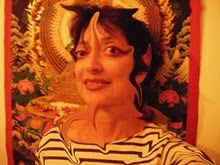 Bonny Finberg splits her time between living and working in New York City and writing new works in Paris. Her chapbook of short stories, How the Discovery of Sugar Produced the Romantic Era (Sisyphus Press, NY, 2007) was featured on the DVD 5 Guys Read Finberg. Her work appears in journals such as the Evergreen Review and The Brooklyn Rail. She has also been featured in anthologies, such as in four Unbearables Anthologies, Lost and Found: New York Stories from Mr. Beller's Neighborhood and Best American Erotica. Her prose has been translated into French, Hungarian and Japanese. For more on Finberg, see her weblog at http://bonny-finberg.blogspot.com/finberg.blogspot.com/

Some Book & Journal Covers from works by or including the authors who will be reading January 28th at Berkeley Books in Paris, France: 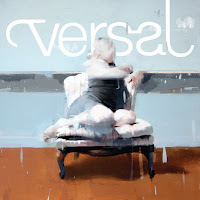 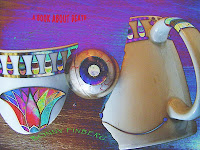