The Aegean, from an Iowan's POV

Underwater--I open my eyes and it's like in a film of the sea. 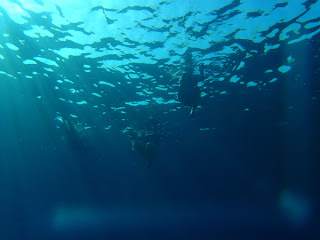 Striations of blue and then a sandy-stone bottom. Of course, in a film version this scene must be followed with danger (sudden arrival of Great White sharks, diving tank failure, attack of the killer seaturtles) or romance (James Bond plunging in next to a scantily-clad Bond girl, camera pans in for underwater kiss before some sort of betrayal or splashy surfacing to awaiting 50 foot yacht and champagne already chilled as James towls off his hairy chest).

In reality, there is just the blue. Even when I am not that far out I can sometimes turn 360 degrees underwater and see the same striations in every direction. It's a bit disconcerting for a land-dweller like myself. And yesterday, a heavy wind so that when I make myself like a raft, close my eyes and just let myself drift on the surface, I have the surprise of realizing I have been drifting out from shore more than I'd expected--though still not as far as many people 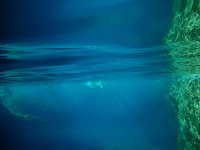 swim. At night, I hear the waves in my ears, feel my body on the stiff mattress of my pansion as if still adrift. The land should not move, is not wavering beneath me, but the sensation remains of waves and tides.
(Photo credits: from the blog for the Aegean Center for the Fine Arts--see thier site for details on their programs! http://aegeancenter.wordpress.com/)
Posted by Jennifer K Dick at 3:35 AM