Into the Worlds of Others... 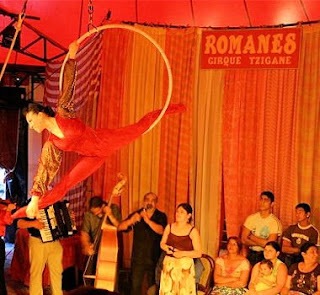 There are ways of travelling when one stays where one is, and this weekend felt much like that. Being transported, touching in little ways the worlds of others. First, Saturday, Agnès Vannouvong invited Marielle, Aurélie and I to join her at the Cirque Romanès (see this site for a short film of them, too, as well as details).

h between a few scattered greeny parks snaking between high housing buildings on a smallish, fenced-in fairground lie the gypsy tent and caravanes of the Cirque Romanès, meaning of poet Alexandre Romanès, his wife Délia and family. 'Romanès' is a pseudonym which means 'the language of man', and Alexandre is both circus guru and poet, author of 2 books with a third on the way (though he only learned to read & write after the age of 20). We have come here at Agnès suggestion to meet her after she interviews Romanès for her forthcoming book on Genet (which will be out from Les Presses du Réel next year°. Romanès, in fact once lived with Genet, and knew him well for over a decade. 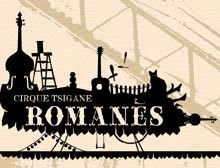 When I arrive, I see from the edge of the fence Agnès at a tiny table propped up under a tree at the side of one of the caravanes, Romanès is opposite her, a black had riding high on his head, wearing a beige zip-front jacket over a t-shirt, somewhere between stylish and casual, he is at once debonaire and completely approachable looking. Agnès leans forward attentively, Aurélie at her side, both capturing every word and nuance as he answers a few last questions before the show.


As I wait, I watch others enter the gates. Once inside, we are

all amid the children playing, some jumping rope, another pair seems to be involved in tag, and one boy (perhaps 12?) is filming everyone and everything, such as the other families chatting and getting ready for the performance, some visiting film crew with larger, less easily manoeuverable camera and sound crew dragging poles and cords with them, and the audience meandering in from their Parisian lives as if over a border into this parallel universe. As the French events site evene.fr put it "Le cirque tsigane d'Alexandre Romanès est une invitation au voyage."

The show itself is bordered by a row of women who sit in chairs closing up the circle of the circus tent. One even knits a sweater as the show--comprised of acrobatics of various styles, levels and expertise, jugglers, clowns, gypsy singers and Balkan musicians play. The kids, too, have their short acts, two girls, probably between 7 and 9 years old, hoolah hoop, a boy tightrope walks on a rope suspended no higher than a balance beam (but which takes the same skill! It reassures me, personally, since it is the young boy who had been filming who takes his turn sliding backand forth, a bit wobbly, along the rope--yet with no falls!) The acts which are the most captivating are those of the air-acrobats, one woman who rolls herself up and down in a long ribbon of fabric as the main singer (check out Cirque Romanès' myspace site to hear her) lulls into a dreamy elsewherespace. And a couple whose sensuality sizzles between them as the man suspends the woman by a single arm from 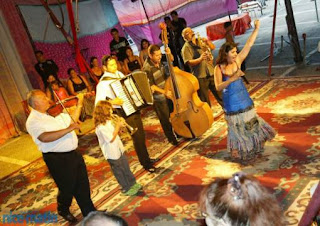 where they have climbed off a platform. He hangs upside down by his knees and she slides down his body. Everything is trust, that he can, will hold her, not slip. Both are intensely strong, and the music again adds feeling to the three series of acts they do high above us. Another I feel should be mentioned is the "clown". Not a red-nosed, painted-on-smile, big curly-bright-color-wigged clown, but a guy in beige and greys, his own short, dark hair, wearing an old-fashioned suit, sometimes the jacket with, other times just a vest. He is endering like Dumbo, playing up his floppy, long-armed tricks of the eye, with expressions that would rival any silent screen star. His acts include juggling, some magic tricks, playing the fool, bouncing a series of balls on a door in varying patterns, etc. All the time, the row of women sit, one nurses a baby, another knits, others observe or sing, and the men play the Balkan music (violin, bass, accordeon, etc.) On occasion, some woman in her long gypsy skirt or one of the young girls comes out and does a little jig, spins for a moment in the delight of dancing--in the case of the children, it is like this is their living room, and they are merely playing, enjoying life, with all the family--of which we as spectators now feel a part--present. It seems like a sort of crazy night in the homestead in a way, only with extreme performer skills which make us gasp. To close off the night, as the music and the acts come to an end, round 10 o'clock (kid's bedtime) the group sells off some homefried donuts with little plastic cups of coca-cola or wine. And then we cross back out of the gate into the dark, walk past the gigantic spire of some odd contemporary brick orthodox church, and head back down into the metro ....and perhaps, perhaps we never were anywhere at all, certainly not somewhere in Paris... 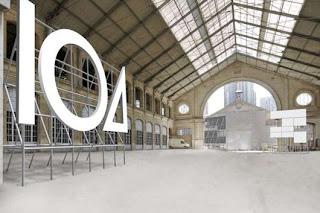 Sunday. I had not yet seen the Centre 104, despite having completed some translations of Christophe Lamiot Enos' work for their first edition of the revue 104 (&, note: Barbara Beck, Rugo Quintavalle, Christophe & I will read from these & other works of our own on 31st May 2009 at 19h at the 104!). Justin Taylor is back squatting at my place a few days and we had not been so productive, so we headed over to see what had become of the old pompes funèbres reconverted into this giant arts center by the city and a few choice private donors.

The space, as we entered, was overwhelmingly massive. Big, open, with a sense of vastness so unFrench (or at least terribly unParisian) that even though there were people milling about here and there it did not feel Sunday-crowded, no one brushed against us, and the space felt luminous even below the grey sky. There were posts with programs, and even a sort of "schedule-totem" by the entrance with lists of everying going on for the day, hour by hour events, open studios, talks, visits, shows. We were there for the free Qi Gong, which we saw announced to be "on la terrasse"--wherever that was. As we entred further, in search of our destination, a rumble of drums trembled below our feet, emerging from some dance studio or the belly of the place. There were bacs of grass and other greenery in the middle of one part, but we didn't have the 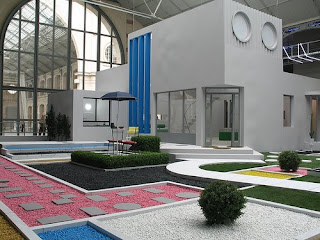 time to explore what it was doing there. I could see people milling round in the sealed-off bookstore behind glass, but we charged ahead pas some knee-high-level walls, weaving back and forth, then suddenly coming up upon the the very fun, colorful, surreal entirely whole reproduction of Jacques Tati's Villa Arpel (pictured at left, link to a design site write-up on it) from his 1958 film Mon Oncle. People were taking pictures by the fencing of the giant fish fountain, the pink and blue stones walkways, the furnishings and fake-automatic household appliances. Peeking in windows. We rushed past (though returned later to watch the footage of the film and peek into the now-abandoned rooms and even at the old Chevy parked in the garage). Suddenly the space opened up even more, and a small tent which announced itself as the "café" stood in themiddle of the building. We stopped at an info booth to learn the the Qi Gong had not yet started but was just another block down. It was outside in a sealed-in courtyard.

A Chinese man in black was just getting started as we tossed our stuff in a corner and took positions. Slowly, over the next hour, our bodies followed his. At one point mid-afternoon session he stopped to talk about what Qi Gong was in his charmingly poor French. It made me think of all the cultures and all the languages of people who come here and then find themselves trying to explain what are the most innate aspects of their native culture to a culture not their own. As he spoke of energy, tension, bloodflow, body posture, losing for a moment the words he sought ('adrenaline' and 'endorphins', or, later, 'flexible') and making minute vocabulary errors (using the verb connaître for savoir, for example) and yet these very errors made the French Sunday strollers who had wandered in and joined up with those of us who had evidently intended to attend the session listen harder, closer, with greater respect perhaps and attention then had he been totally French in his mode and ways of speaking (he is pictured left below in a photo by French professional photographer Antoine Doyen). His patient, and demanding patie 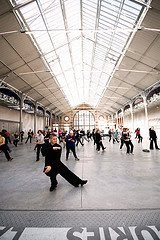 nce, explanation as we reflected on our own body, posture, habits, transported us closer to where he came from, and as we resumed the last series of Qi Gong exercises it seemed again everyone was allowing themselves to let go of themselves, travel towards the other, and the other in and of the self. Children, again, played at the feet of a few adults, some older people sat on benches, some children joined the rest of us as our hands swept the air between us, brushed the earth, reached to the heavens, all the while catching and releasing our 'chi', as the instructor had said, to the lulling rhymns of a soft, Chinese music.


When it was over, I felt again conscious of me as body, heading back into the white afternoon of a drowsy Sunday, ready for a Monday which would be entirely Paris. But in some ways, I felt I had drifted away and so I was happy to return to my city.
Posted by Jennifer K Dick at 9:43 AM