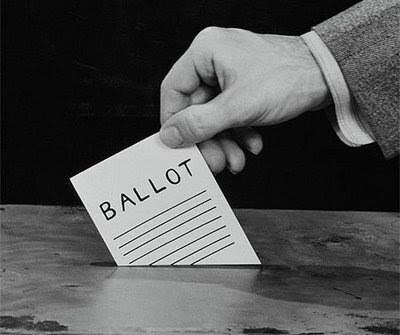 It is almost midnight as I begin this, my heart thrumming, my body anxious about what may or may not be a whole world of change starting tomorrow: Election day in the USA.

I have, of course, cast my vote by registered mail, in hopes to see my home state of Iowa painted a lovely deep blue cobalt color. But I'm still anxious and wonder, will people I know actually go and vote? Or just say "well, Obama's got it, so I don't need to"? I have indeed heard such phrases and from not just one friend. Worrisome!!! My response? CAST YOUR VOTE! This way, you can either participate in the great sense of pride you helped make this change happen, and hopefully in a landslide, or else, if all the democrats stay home, you won't have to feel guilt for being part of that loser party. 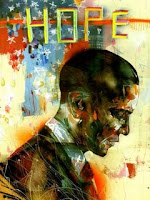 Mostly, I am selfish. So, beyond my sense that if McCain won the entire world could perhaps be looking at its demise, (and not because of little Miss Palin, either, but McCain himself and his military decision-making processes), I am thinking of the arts, and the danger the Republicans put the arts in. Palin is known for her oh-so-openminded attitude towards reading, and being a writer makes one like me worry that the country they come from could clamp up even more. Not to speak of decreasing public spending on the arts, for which the Reps are known. Of course, I feel optimistic, following the lovely POLLSTER results avidly, that Obama and Biden will take the vote, and bring into action among many things their arts policy.
But I also wanted to thank many of the artists (such as David Chloe, who did the painting on the left above), literary magazines and galleries who have been committed to engaging themselves artistically in this election, in honor of a change we do in fact believe in, and which is hopefully coming today. Just as Tristan Eaton reminds us on the Obama Art Report Blog when he quotes Kennedy saying: "For art establishes the basic human truths which must serve as the touchstones of our judgment. The artist...faithful to his personal vision of reality, becomes the last champion of the individual mind and sensibility against an intrusive society and an offensive state." Here are some art and lit sites attempting to do just that today: 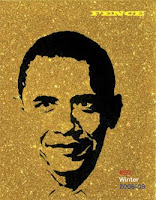 OUT TODAY: To celebrate this hope for change, FENCE Magazine has put out a special issue with--who else?--Obama on the cover. The TOContents is listed online, and features some exciting authors such as Srikanth Reddy with new poems (yes, an old friend who spent time in Paris before his first book came out), fiction by Joe Ashby Porter who was recent visitor to our fair city for his reading at Red Wheelbarrow Bookstore, fiction by Rae Armantrout, and poems by Brandon Shimoda (the Cutbank Poetry editor I often mention, as he has a few recent works out such as a new book and chapbook).

LOCAL GALLERY: Owned by American Gallerist, Dorothy's Gallery has been trying to beef up interest in the Obama vote, raise money, speak to the French from her American point of view, and has arranged readings, music events and an art show in Obama's honor. Good for her, devoting her business to a cause like this! (painting at right below by Elizabeth McClancy, 2006) 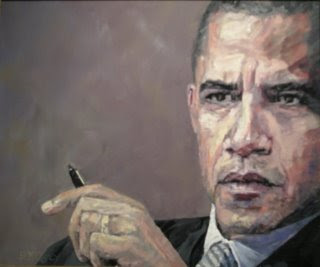 ENDING TODAY: Wave Books, poetry publishers way off there on the farthest reaches of the US from here, Seattle, that far until one heads out to Hawaii, has been maintaining a very exciting political countdown to the election poetry and poem blog : Poetry Politic. As they describe it themselves on the Wave Books homepage, "A blog in fifty days, from September 15th through November 4th of 2008, presenting news from the intersection between poetry and politics. PoetryPolitic aims to offer a spectrum of critical and imaginative thinking, through which we, as citizens and as readers, might be brought into a field of greater and more urgent awareness. The poems, recordings, videos, essays and interviews represent the ways in which poetry might respond to the complexity of the moment, enacting and catalyzing the thinking and conversations necessary towards that response." Of course, my PhD being on Myung Mi Kim's

work, among others, I could not be less than thrilled to see her championed as the post on Day 48, texts from Dura!!! Not to miss on this last day, THE END OF THE COUNTDOWN POST!!! They also just published the anthology "State of the Union: 50 Political Poems" Purchase proceeds go to helping homelessness and poverty among veterans. They get a gold star for reminding everyone that every little effort helps, and that poetry can make a change without having to violate its artistic credos.
Yes, there are likely thousands of other groups such as these, and thank you all! I hope these three listed here will lead others along the sinowy links to more such groups and efforts. But do get off the screen and into the world and VOTE TODAY if you are a registered USA voter!!!
MAKE CHANGE HAPPEN.
Posted by Jennifer K Dick at 2:52 PM

Thanks Jen, this is very encouraging - We are sweating in Colorado, and yes, we voted, early!