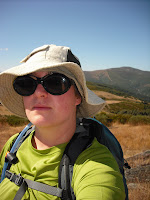 So this will be a short(ish) shot in the dark! Got into Sarria this afternoon after a long lost wander with the Czech woman I have met, Nora. We sort of went öff Camino¨as it were, exasperated with the highway we were along we followed an alternate sign for Sarria--dashing through the woods and fields and then along the paths that said our destination was originally 4,9kms away, the next sign read 3kms away and then the next sign again read 3. Oops!!! We laughed a lot as we kept along the path we´d hit, unsure whether we were even heading in the right direction at all. But there were waterfalls everywhere and the river was too gorgeous for us to leave. We decided if all else failed, the path would certainly lead to some road and we could get directions from there. But the path did do what it had originally promised, and we got into Sarria late but with the pleasure of having traipsed around in the woods of Gallicia. It is lovely, damp, rich with plant life here. So much of a change from the past trekking the meseta and the mountains (note my picture at the right going over one of the last mountains out of those dry days!).
But I must admit the recent week or rather post-Leon days felt like they were part of some epic 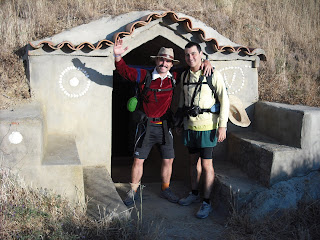 heroes darker part of his quest. My descent into hell? Or passage through it? Or just the obstacles the questing heroes must overcome on their journey (ex: "heroes" like these 2 great Spanish pilgrims I took a snap of here at the right as they and then I stopped after staying in Torradillos del Camino into one of the many wine cellars built into the hills of the meseta, here in San Nicolas I believe--the wine maker here has his place decked out with camino shells and invited us in for a drink, perhaps fortifying us for our trials and tribulations!)? But to go back to the logic of passages and obstacles, for example, the Camino alberges are increasingly infested with bedbugs and some of us (as in me!) are quite allergic to them, then I had the double pleasure of having an allergic reaction to the allergical cream, so--funnily enough in a town called Hopital de Orbigo--had to stop into a medical clinic and see a doctor. This might seem easy enough, but then again, you perhaps speak Spanish. I do not. I understand quite a bit, but cannot say much of anything! Regradless, between the Dr, nurse and a med tech who happened by at that moment, I got a new cream and set of antihistamines and was quickly looking less of a leper though my arms are still quite a fright. To add to this sense of being attacked by night creatures which makes it difficutl to sleep or decide where to sleep (I even slept outside an Alberge with half the alberge one night after we all found them everywhere!) I took a bit of a tumble down a mountain. Did a nice little roll, pack and all, and ended up like a beetle on my pack-back with all fours in the air. Though I really was lucky to have broken nothing and only perhaps strained a bit the right arm and scraped and bruised myself, the tumble left me feeling wary of the very very steep descents we had that day into El Acebo and then into Molinasecca. Tender steps, slow on the slick stone and gravel. Here is a grat image I took of an earlier part of the trek, looking at the ruins of a castle on the hill and at the right the old catholic school and church. It is called Castrojeriz, and I came into it out of the rain after leaving Hantanas: 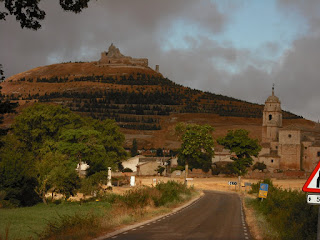 But now I am down the last of the major mountains, this last one covered with trees and mosses and heather. Lovely actually, as is the region of Gallicia, despite its cows wandering all over the place (as in behind us for a bit yesterday with a farmer trying desperately to get them back, then as we had dinner at a cafe a whole heard came trundling by in between the cafe tables!) and with their cowy odors!

Much has not been said of recent journeys, but I do have a few of my own photos from many many of the days along the trek, and with people I have walked or had drinks with from the English group now down to the lovely trio of Rachel, Jana and Paul who I meet up with every now and again, to what a German named Martin calls the "French Connection" which is also down to a trio doing the final days here, and to an Australienne named Sophie doing the trek alone as well and who I had a delightful few days with as we strolled out of Leon. But it appears that the blogger and this computer´s system do not want to put many pics up today, so I suppose photos may have to wait for my return. 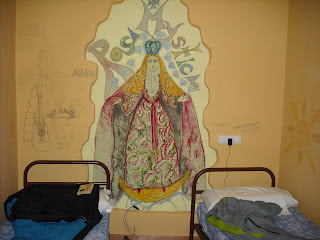 I am about 5-6 days max from Santiago. I must say, blogging as I get into towns a bit later is less an option, but I will certainly do my best to leave another message before the final destination is met. And hello to all you Parisiens back for the rentree already! I so look forward to my own bed, especially after some of the group experiences I have had in dorm spaces! The silence of waking alone with no bags rustling, the ability to slip into bed without fearing that there will be insects attacking me in the night, and the beauty of not waking at 4 then 5 then 6! This said, I loved my rest at the Jesus Alberge (room pictured here at the right) where Australian Sophie and I stayed. no one even woke up before 7! And we were on the road at 8! It felt luxurious, and I enjoyed the graffittied walls, as Rosa Mystica pictured here above our bed!
Posted by Jennifer K Dick at 11:40 AM